Hearing the note of fear in my voice, Audrey looked up at me quizzically. “I don’t know how to talk to children,” I said.

“Of course you do,” Audrey said, looking at me like I had lost my marbles. “You talk to them like you would adults, just use simpler words.”

I sat down in front of her and tried to explain. “Audrey, I told Fabienne in the beginning that I didn’t feel capable of giving tours in French, but she wouldn’t listen to me. So when she insisted on my doing it, I wrote a tour using the books you gave me and memorized it. I don’t even understand half of the words that I am using. So I can’t just ‘dumb it down’ for kids. I would have to rewrite the whole thing, and learn it by heart.”

The elderly women sat stock still and stared at me. “You memorized your tour, but you don’t understand what you’re saying?”

“I’m starting to understand it. There are just a few words now that I don’t get,” I muttered, sheepishly.

She shook her head as if to banish my words from her mind. “Listen, the other guide is off next week, so it’s just you and me. There are sixty kids coming with some parents and teachers to accompany them. We have to split the group. It’s too big for me to take on my own: we couldn’t even fit the whole group into The Insignia Room. I’m sorry – I don’t have a choice.”

Walking across the room to my desk, I massaged my throbbing temples with my fingertips. I sat down, got out my dictionary and started writing a children’s version of my tour.

I stood in front of the group of thirty ten-year olds, thinking to myself that it would have been easier to get a job teaching Genghis Khan’s army to dance ballet than giving castle tours to hyperactive school children. As they leapt around the room a handful of parents and teachers stood silently behind, looking on with amusement, daring me to try to control the situation. “I wouldn’t lie on that bed unless you want to get lice,” I said, causing a young show-off to leap out of his reclining position on a 15th-century canopy bed and begin scratching himself furiously.

“OK everybody, sit down on the floor,” I commanded. Several children took that to mean “lie down spread-eagle, blocking the other tourists from entering or exiting the room.” I rolled my eyes and looked at the parents. They grinned. “I said sit, not lie,” I said, pointing to the offenders until they sat up.

Someone took a photo, popping their flash in my eyes. “I mentioned at the beginning of the tour – no flash photos!” I glanced back at the teacher for support, but she had suddenly become absorbed in a tapestry hanging in one of the back corners of the room.

“Everybody be still and listen,” I growled, and then stumbled my way through an explanation of how the rooms were used in the Middle Ages, and what purpose each piece of furniture served. I asked the children questions to try to get them involved. Some of them paid attention. Others sat in the back and made farting noises. Finally I asked if there were any questions. A handful of children raised their hands frantically, and I congratulated myself on having caught their attention.

I pointed to a random hand, and a skinny boy with glasses leaned eagerly towards me and asked, “Would you die if someone poured boiling oil on you, or would your skin just blister and peel off?”

I looked up at the parents, who were peering out of the window, apparently studying the castle’s back gardens with great concentration. “Does anyone have a question about what I was talking about?” I replied. Half of the hands went down.

“Where did the king and queen go to the bathroom?” a small blond girl asked seriously. I spotted the teacher slipping out of the room through a side door. Luckily I had come across a paragraph on medieval sanitation in my readings, and replied that there were sometimes toilet holes within the castle walls.

“So where did it go?” someone else asked.

“Where did what go?” I replied, confused.

“The caca and pipi!” they replied in unison.

“On the ground outside, I suppose,” I responded.

“Ewwwwwwww!!!” moaned the children in ecstasy, rolling around on the floor.

The remaining questions included:
“Why didn’t the king and queen sleep in the same bed?”
”Why is that window open?”
”Are there dungeons?”
And, regarding a large metal-bound safe opened only by coded levers, “So what if you used a flamethrower? Then could you get it open?”

Finally there was only one hand remaining up. “Yes, what is your question?” I asked the biggest boy, who was looking at me with a smirk.

“Can I take your picture?” he said, holding up his camera and wagging his eyebrows up and down.

“No,” I said, and led everyone into the last room, where I proceeded to upset half of the group by giving my regular speech about the high infant mortality rate in the Middle Ages, illustrated by the fact that seven of Anne of Brittany’s nine children died in infancy.

By the time the teacher had comforted the last crying child and left the room throwing me a look of pure hatred, I was ready to collapse. Knowing that Audrey had another half hour before her tour was over, I went back to our office, closed the door, and turned the enormous iron key, locking myself in and everyone else out. Then I lay down on the floor, resting my face on the ancient ceramic tiles, letting their coolness sooth my burning cheeks and thought to myself, “What the hell do I think I’m doing here?”

The next day Audrey told me that I would be taking another children’s group the following week.

“Audrey, please don’t ask me to do that again,” I begged. “Yesterday was a catastrophe.”

“I’m sure you did just fine!” she said, matter-of-factly.

I told her how awful the group had been, and she reassured me that yesterday’s group had been from a bad part of town and was known for its behavioral problems. “Next week’s group is here on vacation from a wealthy suburb of Paris, for their summer camp, and although they’re younger, they will be very well behaved,” she reassured me.

“Six,” she replied, as she penciled my name into the book.

“Six years old!” I moaned to Laurent that night over dinner. “That’s totally different from ten years old. I’ll have to write a completely different tour!”

“Mais non,” he said, laughing at my distress. “Just say the same stuff.”

“Well, I’m definitely cutting out the dying medieval children part this time. Do you think I should skip the Stag Hunt tapestries as well? Won’t that scare them?”

“No, kids love that gory stuff! Definitely leave it in,” Laurent replied.

I confirmed with Audrey the next day. “We always talk about the Stag Hunt tapestries in our tour,” she responded, surprised. “Why would we leave it out?”

“Don’t you think it’s a bit gory for little children?” I replied.

She looked at me quizzically and responded, “It’s a hunt. It’s historical. Keep it in the tour.”

I reminded myself of the dead animals one always sees hanging on hooks in French markets, and figured that, unlike American children who are used to seeing unrecognizable meat sold under cellophane, French kids must be used to the fact that a furry bunny had to be killed to put that “lapin á la moutarde” on their plates. I sat down at my desk to re-translate the tour using six-year old vocabulary.

A week later, I stood in front of a group of tiny children wearing identical blue summer-camp caps, pointing to a tapestry showing a hunter driving a dagger into a stag’s heart.

“This group of tapestries shows a stag hunt,” I said uncomfortably. “In the first one, you can see the hunter killing the stag with a knife. And over here, in the second tapestry, you see him hanging the stag from a tree, slitting its stomach open, and feeding its intestines to the hunting dogs.” 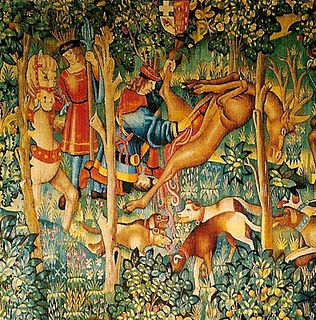 Evisceration of the stag, with hunting dogs feeding on the entrails.

By the time I got to the last tapestry, which depicts the tradition called the “Tribute of the Hoof” where the hunter cuts off the foreleg of the dead deer and offers it to his lord, the teenage girls chaperoning the group were looking at each other in horror and disgust. The children stared at me wide-eyed as if, instead of talking about art history, I was recounting a slasher film to them, scene by gory scene.

Forty-five minutes later I was lying in my office, hot cheek to the cool floor, thinking about the group of six-year olds, two towns over at summer camp, who weren’t going to sleep a wink that night.

8 Comments to Stories from France: The Castle Story, Part V