The following is from my unpublished memoir IN THE VINES, and this story happened about 5 years ago. I’ll give you some today and more tomorrow! 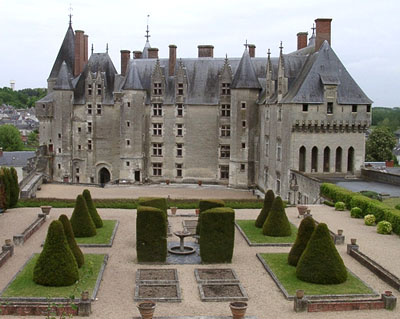 My potential place of employment

I was living in the middle of nowhere. I had just closed down my 19th-century paintings business. And I had a four-month old baby at home. What kind of job could I find speaking a French that was passable but definitely not professional?

It would have to be something in English. Considering that I had a master’s degree in art history and was living in the middle of castle country, I figured looking for a job as a tour guide might be a good place to start. So I began visiting the local châteaux and abbeys to see if any offered tours in English. None did.

My last stop was the Château de Langeais, a medieval castle just a twenty minute drive from my house. Walking into a grandiose stone lobby with low arched ceilings and a fireplace you could park a horse in, I asked the young, snobby looking woman behind the welcome desk if they offered tours in English.

“Non,” she replied, and looked back down at her work, which consisted entirely of shuffling tourist brochures around on the countertop.

“I’m just asking because I am an art historian and am looking for a job as a tour guide.”

She looked back up with an interested glimmer in her eye. “Well then, you are in luck. We have never had tours in English at the Château de Langeais, but our administration has talked about starting this summer. Send us your resumé.”

“Who do I send it to?” I replied, putting on my best blasé look, while actually buzzing with excitement at having even the slightest shot at a job.

“The Château de Langeais,” she answered.

“Yes, but is there anyone in particular I should address it to?”

A week later, I was called in for an interview.

This, however, caused me more angst than excitement. An interview meant that I had to speak in French, while simultaneously coming off as passably intelligent. Although my casual conversational French was by now understandable, interview-French was not in my repertoire. I practiced by calling Laurent by the formal “vous” instead of “tu” for a few days, which made me feel very 19th-century, like I was his chambermaid or mistress.

Seated stiffly on an antique chair in front of an old leather-topped desk, I faced my interviewer and concentrated on breathing. Fabienne, the castle’s “personnel manager,” a beautiful willowy brunette, looked over my resumé and nodded to herself.

“Thank you for inviting me to interview,” I opened. “It was nice of you to see me on such short notice.” And then I froze. I had used the word “tu” instead of “vous”, basically putting Fabienne on the same level as me, or inferring she was my friend. My hand flew to my mouth, and I gasped. “I’m sorry,” I apologized. “The ‘vous’ and ‘tu’ is so confusing when we only use the one word ‘you’ in English.”

Fabienne raised an eyebrow and, grinning, continued to peruse my resumé. She asked me a few questions about my degree and experience in the art world. “We are looking for a perfectly bilingual guide for the summer,” she concluded, “and with your qualifications the position could also involve some research and translating. The job is full-time, six days a week, from June through August, and the pay is…crap.”

Alright, she didn’t actually say “crap”. But she might as well have, considering the hourly rate she threw out at me.

I made some calculations in my head. Childcare wasn’t available on the weekends in the countryside. And since the salary was about the same as what a child sitter cost, I would basically be working for free. I braced myself and told Fabienne that I could work Monday to Friday, and only if the pay was higher.

Fabienne nodded as she listened, then said she would approach the castle director with my concerns while I went home and thought about it.

But before I left, I thought of something she had said earlier. “If you are looking for an English tour guide, why are you asking for someone who is ‘perfectly bilingual’?”

“Because if, by chance, we didn’t have any English-speaking visitors on a certain day, you could give tours in French instead.”

Feeling faintly nauseous, I formulated my confession. “With my medieval art history background, I would be perfectly comfortable giving château tours in English. I would be happy to do translations, and the research would be no problem. But to be honest, I don’t think I am capable of giving tours in French. I am not bilingual, and the language needed would be too specialized for my vocabulary.”

“Don’t be silly,” Fabienne responded, dismissively. “People love an accent. And if you make little mistakes in French they will think it’s charming. I’m sure you’ll do just fine.”

“Honestly, Fabienne, I have to refuse the French tours. I wouldn’t want to be an embarrassment to the château.”

“Listen,” she said, standing up and holding her hand out across the desk to shake mine. “It probably won’t even happen, so don’t worry about it.”

As I stood, I glanced at the stack of resumés sitting on her desk, little passport photos stapled into the upper right corner of each, as is the custom in France. The other candidates all looked fifteen years old. No wonder she was interested. Even with a small pay raise, for a “bilingual” guide with a master’s degree in medieval art history, she would be getting a bargain basement deal. I left, praying to the paycheck gods that they would choose an English-only guide with experience over every employer’s dream: cheap labor.

< An example of my French when I moved here   -    Stories From France: Castle Story, Part II >

5 Comments to Stories from France: Castle Story Part I