Valentine’s Day blast from the past

On this Valentine’s Day, I thought a few of you might like to re-visit the DIE FOR ME universe.

This is Charlotte’s Valentine’s letter to Ambrose. The one she wrote every year, but never showed him. And you all know how that ended up! (Some people totally deserve their happy endings.)

So here’s paean to unrequited love for your Valentine Day…

Today is Valentine’s Day—le jour de la Saint-Valentin. The day of lovers. The only day of the year I can’t look you in the face. Because on this day, I can’t keep my mask from slipping just slightly, and I don’t want you to see what’s behind.
I have known you now for almost seven decades. Lived under the same roof as you for sixty-eight years. I know you as well as my own twin brother.
I know how you’ll react to any given situation. What you will say. How you will respond.
Which should mean that by now I should be totally bored of you. Your predictability should make me yawn. Seeing you in the same scenarios day after day, year after year, should make me roll my eyes. And yet, it doesn’t.
Instead, I find myself anticipating your reactions and congratulating myself on guessing them right every single time. When I hear your laughter ring through the house when you come home, I am unable to resist the smile it brings to my lips. I love you, Ambrose. Passionately. Irremediably. Hopelessly.
It wasn’t love at first sight. When Jean-Baptiste carried your body back from that Lorraine battlefield, I found you intriguing in your complete Americanness—your Yankee bravado. Your passion for jazz and film and dancing brought a welcome breath of life to our household of kindred. I liked you for all those things. Loved you as a brother.
Until I got to know you better. Your joie de vivre was infectious. It infected me. It made my heart swell with happiness—not only when I was with you, but when I learned to see the world through your eyes. You brought me joy, and I should be satisfied with that. But I’m not.
When Charles told you how I felt and you admitted to him that your sentiments weren’t the same, I spent the next decade hoping you would change your mind. Doing everything I could to make you see me in a different light: desirable, not little-sister-ish.
When that didn’t work, I spent the next ten years trying to be okay with my lot. To find someone else. But while you are here living with me, walking with me, joking your way through every meal, my heart can go nowhere else.
Now I’m resigned. As I do every year, I will finish this letter, feel a bit better for it, and then place it in the back of my journal. It will join the other forty-three letters to you. Forty-three declarations of love that you will never see.
On this Valentine’s Day I wish I could tell you that even though you don’t love me the way I love you, every day with you is a gift.

[If you want to read more excerpts, behind-the-scenes material, and deleted sections, download INSIDE THE WORLD OF DIE FOR ME.] 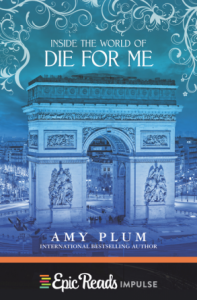 I hope you’re busy playing the YA Books Central Scavenger Hunt, which started yesterday and lasts for a whole week! There are so many amazing authors participating, and too many prizes being given away to count!

I’ll be featuring parts of my Scavenger Hunt DREAMFALL interview this week to lure you into the game. The first question:

YABC: Who is your favorite character in the book?

AMY PLUM: This is always the hardest question to answer. ALL of the characters are my favorite! Don’t ask me to pick which of my children I love the most. 🙂

But I’ll tell you about one who is very special to me. Jaime is a pre-med student on full-ride academic scholarship, having been raised in a super-rough part of Detroit. The thing that’s different about this character is that I never reveal their gender. I didn’t even let myself think of Jaime as a boy or a girl. My daughter begged me to tell her…just her…which Jaime was, and I said, “I don’t even know that myself!” “But you have to know!” she pleaded. “I won’t let myself know,” was my answer.

Jaime is an experiment in reader expectations…half of my Beta readers thought Jaime was a boy and half a girl, so I felt like I had succeeded. Because just how important is gender, anyway? And which is more important—what the author wants you to think, or how the reader interprets the characters and the story in their mind? The fate of the sleepers depends on Jaime, who will have to risk everything to save them.

But then there is the dreamy (no pun intended) Fergus, who suffers from narcolepsy. There is Cata, who suffers PTSD from her violent childhood. Ant who is…just Ant. Quirky, strange, and super-intelligent. George who is kick-ass and funny. BethAnn who is trying to overcome overwhelming guilt over her part in her sister’s death. Sinclair, the spoiled rich kid with moviestar looks. And Remi, who was the only member of his family to survive a genocide. They all have enormous problems to overcome, and you should see how that plays out in their nightmares!

Read the rest of the interview and enter to win a signed hardback of DREAMFALL here! 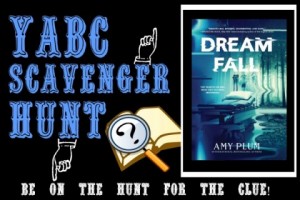