The other day I was in the middle of getting my hair cut when suddenly I was gripped by a strange feeling. Like somewhere nearby, something big was going down. Little did I know that a few blocks away, an epic battle was taking place in my apartment. The dispute was over who would be the guardian of my house.

This status had been held for the last three years by Poe, my beloved stuffed raven, bought in honor of his namesake in my After the End series. 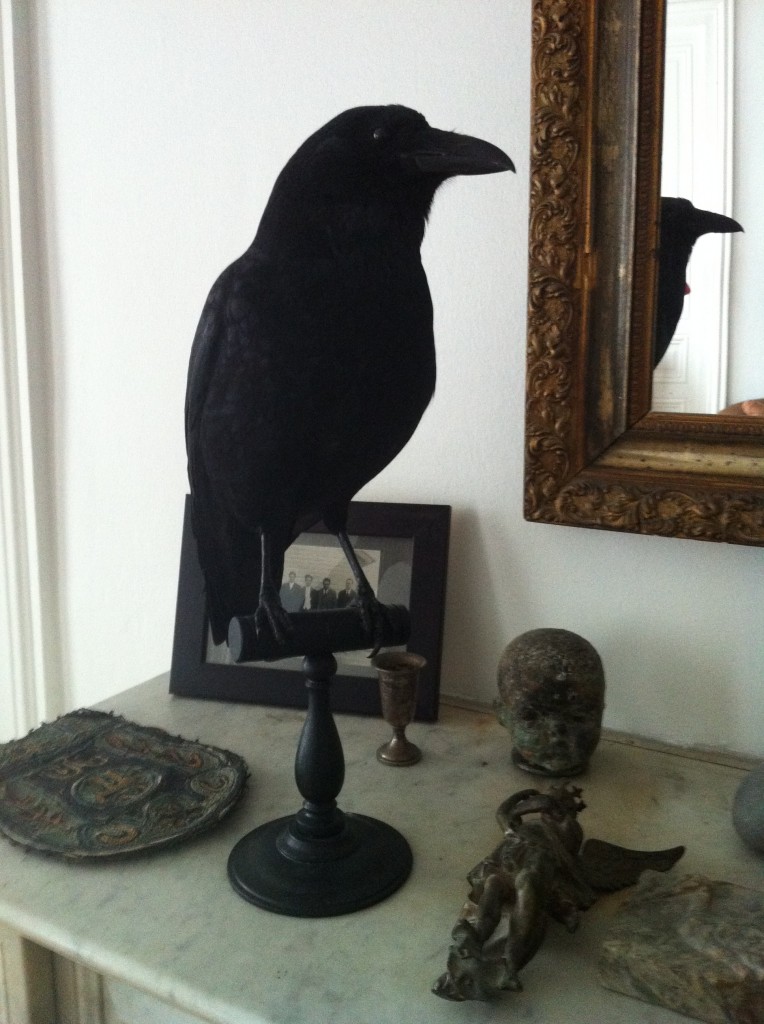 But it was about to be challenged by Obi, my new Labrador puppy. 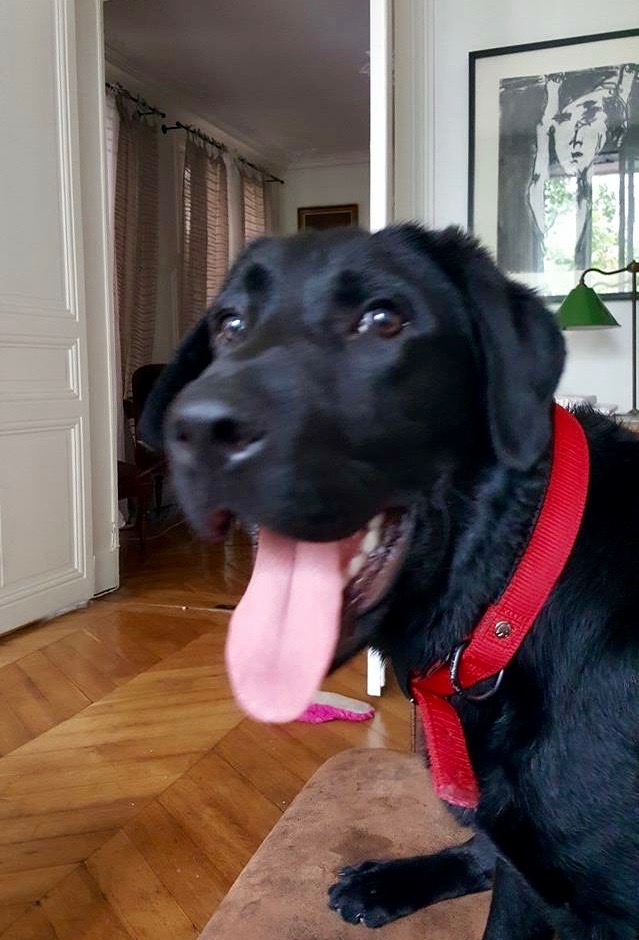 Obi was the newcomer, with only four months under his belt. But he had an advantage. He was alive.

The battle began with a stare-down.

“I haven’t noticed you here before,” Obi commented after eight seconds, irked that he had lost the blinking contest so quickly.

“It’s because Amy puts me on a high shelf when she leaves you home alone,” Poe replied. His beak didn’t move when he spoke.  Obi found that unnerving.

“Oh yeah? Then why didn’t she today?” he asked.

“Probably because she closed the door between my room and your room.”

“The one you just rammed open by throwing your body against it for the last half hour.”

Obi looked over his shoulder at the broken lock. “Oh. That door.” He looked back at the bird. “So, how are we going to settle this thing?”

“What are you talking about?”

“The guardianship of Amy’s house.”

“Don’t be ridiculous. You’re a spazzed-out puppy and I’m a wise old bird. I’ve been on the job here longer than you’ve been alive.”

Obi had been trying to keep his attention trained on the raven, but something was itching right…down… He twisted around and frantically gnawed at the base of his tail. When he finished, he looked back up at the bird. “There can be only one.” His voice was weirdly high-pitched, and he spoke with a strange accent.

Obi cleared the phlegm from his throat and repeated, “There can be only one.”

“I heard you the first time, dog. But that’s stupid. There’s plenty of room for both of us.”

“Highlander is not the source of all wisdom. Do you take your advice from a French guy with a sword and bad hair extensions?”

Obi had no idea what the bird was talking about, but he wasn’t going to let confusion get in the way of his mission. “It’s not from Highlander,” he retorted. “It’s from Star Wars. I should know, I’m named after the guy who said it.”

The bird trained its glass eye on him. Obi flinched. The bird spoke. “First of all, your name is short for Oberon, king of fairies, not Obi Wan Kenobi, Jedi master. Amy just told her kids that so they would agree to the name. And secondly, Jedi Obi never said that.”

“Did too.” Obi’s voice trailed off. The more the bird stared at him, the more unsure he felt.

“Listen,” the bird said with a sigh. “If you said, ‘There is another,’ or ‘There is still good in him,’ or ‘That’s a name I’ve not heard in a long time,’ THAT would be Obi Wan. But ‘There can be only one’ is Highlander.”

“How would you know?”

“Amy watched Star Wars IV, V and VI a million times. I could recite the scripts by heart. I, II and III, however aren’t worth the film they’re printed on. Or would that be chips they’re digitized on? I’m not good with technology.”

Obi was starting to feel like he was in over his head. He scratched his haunch with his hind paw and said the first thing that came into his mind. “Well, I’m bigger than you, and I say there can be only one.”

Obi froze and stared at Poe. “What’s that supposed to mean?”

“You’ve pushed me too far, bird.” Obi, growled, and made a leap for the mantle.

This was all that was left of Poe when I got home. 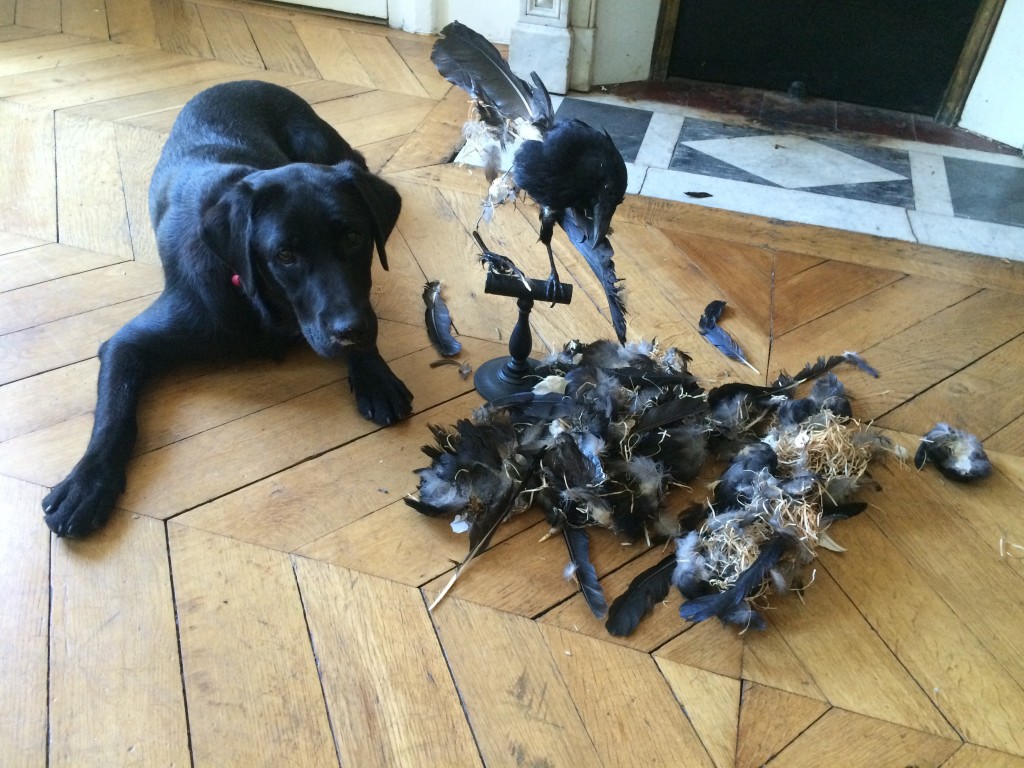 That, and some weird feathery chunks Obi threw up in the corner of the living room. I cleaned it all up, heart in my throat and tears in my eyes. A mighty battle had been fought, and poor Poe had suffered the indignity of yet another death. I said a little prayer to that Great Raven in the Tree and threw his remains in the big green non-recyclable bin.

I went to bed that night, thinking it was all over. There was no one left for Obi to fight. He had already taken out the beaver skull and the crocodile head from Florida the week before. But I was wrong. It wasn’t over…yet.

When I woke up the next morning, there was a note on the mantle in the exact spot where Poe used to stand guard. 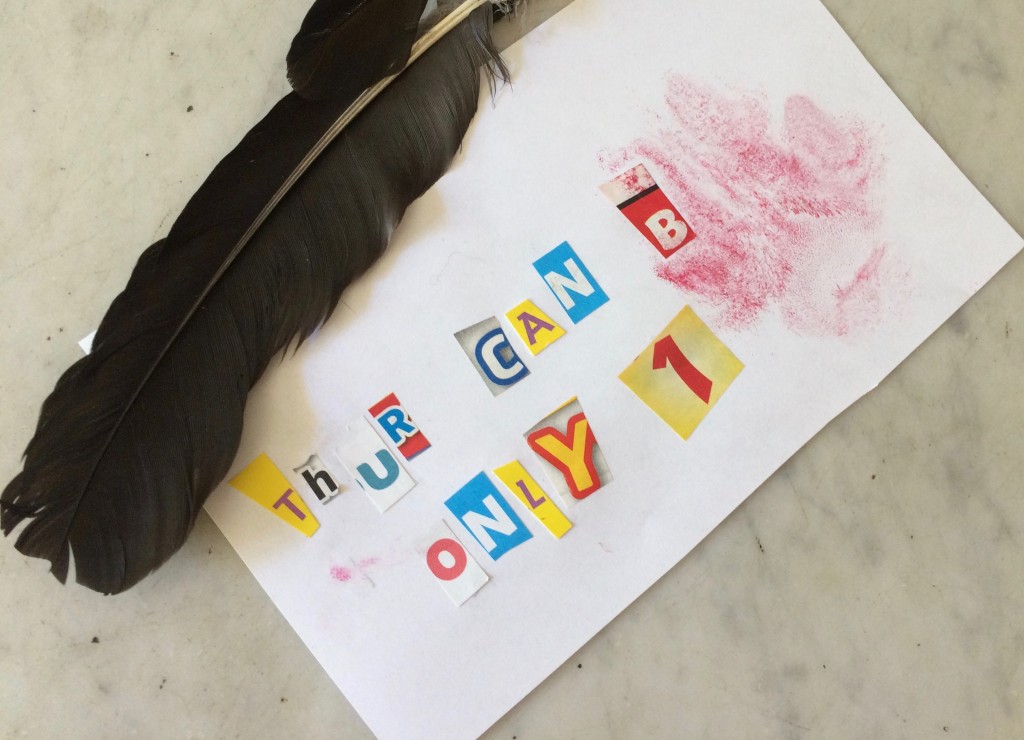