The Attacks on Paris, Friday night

On Friday night I put my kids to bed around 9pm, then went to bed myself around 9:30, ready to tuck into the new Robert Galbraith mystery, freshly downloaded onto my Kindle. I was just getting into the story, a few chapters along, when I started hearing sirens outside.

My apartment is on one of Paris’s major boulevards—the one leading from Place de la Bastille to Place de la République—which means that every time there is a parade, march, or marathon, it goes under my window. It’s exciting when thousands of bikers dressed as Santa roar by on motorcycles or the Republican Guards ride their horses past on their way to the Bastille Day parade. As for the other various demonstrations that happen at least once a week, I’m so protest-jaded that I rarely get up to look.

All this to say…sirens are background noise to me by now. I don’t usually notice. But when they continued for a full twenty minutes, I put my book down and got out of bed, opened my black-out curtains, and looked down at the street. My heart dropped when I saw that these weren’t just police cars blaring their way down the avenue. They were ambulances.

I opened my laptop and went directly to Le Libération’s website. The banner at the top of the page read, “Shootout happening in Paris’s 10th arrondissement. Several dead.” It was 10:15. I clicked on CNN and HuffPost. Neither said anything about Paris. This was new news. This was happening now.

At 10:18 I tweeted that there were sirens going by my window. Two German friends responded immediately that there had been explosions near the soccer stadium where their team was playing France.

That is when I got the feeling.

It was the feeling I got when I heard the first few details about 9/11. The feeling I had in January when I finally realized, an hour after seeing a stretcher being wheeled away from Charlie Hebdo’s offices while walking my daughter to ballet, that this wasn’t just a horrible shooting. It was a pre-planned terrorist attack. It was the numb feeling that something had happened that will change life as you know it. That you and your loved ones are in danger because the target isn’t someone in a gang or drug ring or the mafia. The target is everyday people. The target is you.

At 10:26 I posted a message to my personal Facebook page, my go-to for communicating with family and friends around the globe. I posted that the kids and I were home and in bed, and that we were safe. I got onto my Amy Plum Facebook page and posted a similar message, knowing that I’m the only French connection for many of my readers and that worried messages would soon be rolling in.

At 10:30 I got on the phone and called my ex-husband at his house in the Loire Valley. “The kids and I are safe,” I said. He was confused. “There are multiple shootings in Paris,” I explained. “In our neighborhood. People are dead. I just wanted you to know that we stayed in tonight, and the kids and I are safe.”

By then, sirens were going past my window non-stop. The boulevard was still full of cars, but I noticed that several headed toward République were doing u-turns in the middle of the boulevard and racing off in the other direction. The news was getting out.

At 10:35 someone Tweeted me a headline from CNN reading, “Breaking News: Several People Killed in Paris Shooting. 7 Others Injured.” The news was out. And on the French news it was getting more specific. There were several shootings: all in the 10th and 11th arrondissements. All nearby.

Le Petit Cambodge, a favorite restaurant near the Canal Saint Martin, had been attacked. There were dead bodies on the ground. The other addresses were ones I knew. Ones I have frequently walked by going about my daily business. Paris is small, and this is my neighborhood.

And then I heard the news about the Bataclan. The café and concert hall just a five-minute walk from my house. A block and a half from my children’s school. I took them there to celebrate the last day of school, eating ice cream outside at one of their café tables. There is a playground in the park right across the street where I have taken my kids to blow off steam after school. We walk by it all of the time.

The Bataclan was under attack, I read. Gunmen were inside, while there was a concert going on. An American band I had heard of. I knew the type of people who would go to their concert, and I imagined gunmen entering and starting to shoot.

The ambulances were now going in the other direction. Before, they had been going toward the Bataclan. Now, they were racing away. One after the other. I saw ten in a row. It was 11:32. Someone Tweeted me that 60 were confirmed dead. That’s when I started crying.

As seen from my living room window…

At 11:33 my children’s father called me back. He and his parents were following the news and were, understandably, very worried. I reassured him that we were fine, that the kids hadn’t even woken up, and that we would stay inside. He rescheduled his return to Paris for the next day. He wanted to see his kids.

By then I had been able to contact all of my friends who live nearby. One by one, they all confirmed that they were safe, although a few had gone out and were stranded in other neighborhoods. Those had decided to stay put, finding nearby friends to stay with.

As some of you might know, my childhood was marked by violence. The very worst thing for me is witnessing violence and not being able to do anything about it. I noticed the #porteouverte #opendoor movement starting on Twitter, where Paris residents were offering a place to stay for anyone needing shelter, mainly geared toward tourists who had become stranded. I offered my apartment since it was so close to Bataclan. Although news of my offer was spread quickly by social media, no one answered my ad. It felt like 9/11 once again: people were out there willing to help, but no one was there to take them up on it. Those who had internet access weren’t using it to find shelter. They were using it to call for help.

The next few hours were spent pacing. Outside my window, ambulances had begun to park along the side of the boulevard. Traffic got sparser. At 12:45, I heard a loud noise, and looked outside to see that a motorcyclist had just been hit by a car. Within seconds, forty people, half of them policemen, were there to help him. After a while, one of the ambulances sped him away.

At 12:53 a few dozen police gathered on the corner just across the street from my house. I wondered if they were preparing to storm a building nearby, or had gotten some sort of warning. After ten minutes, they all walked toward the Bataclan together. It had just been their meeting-point. 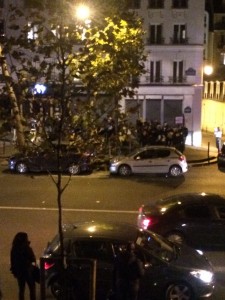 Police gathering across the street.

By 1:30 police had blocked all traffic on the boulevard. It had become a parking lot for ambulances. This was my view: 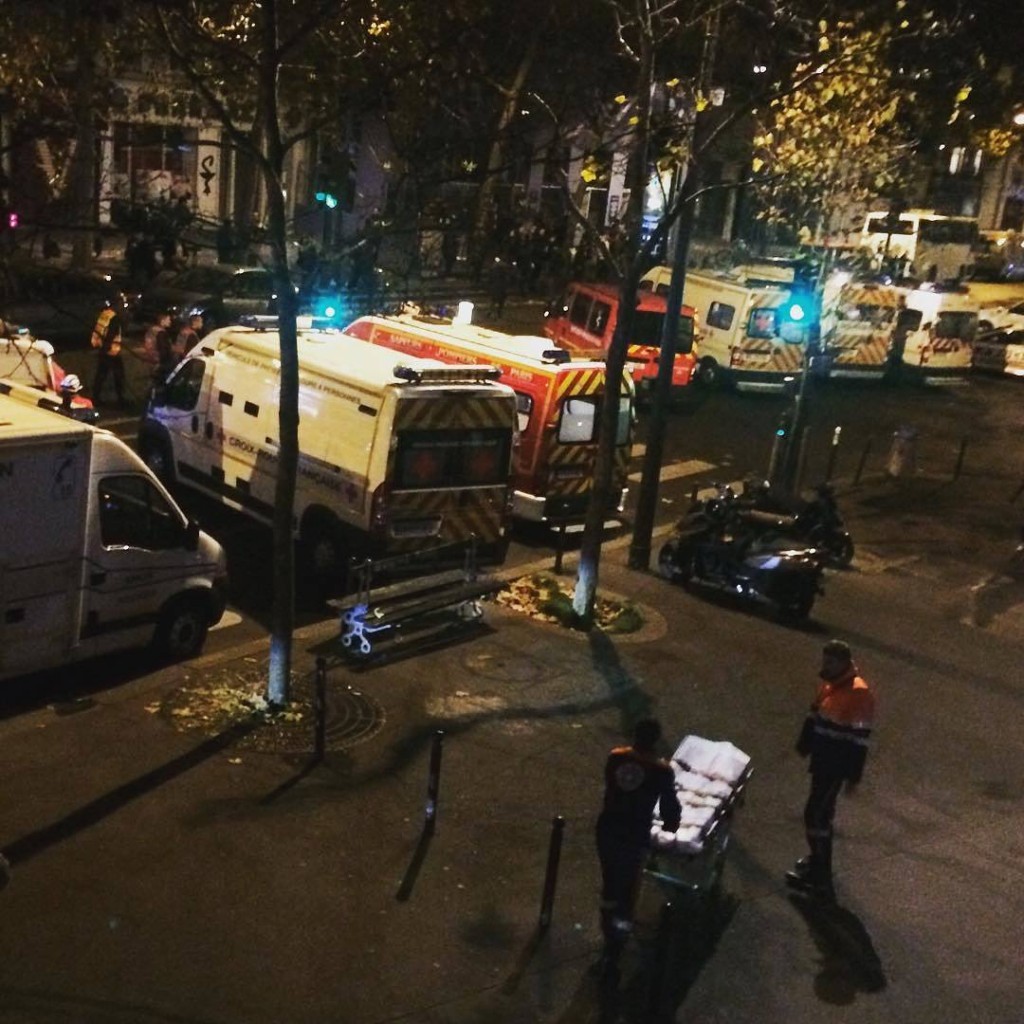 Police tape was put up on my corner, and from time to time, a gurney was rolled from one of the ambulances past the tape. I discovered the next day that the block north of me was used to load the corpses. The ambulances in front of my house were taking bodies to the morgue. A few blocks north, near République were the triage stations. Those ambulances were taking a different route to the hospitals.

On the news, the body count grew by the minute. The police had raided the Bataclan, and the attacks seemed to have stopped. By 3am, I knew I needed to sleep. I checked on my children. Though their bedroom curtains flashed blue and white in the glow of the ambulance lights and the sirens were never-ending, they slept soundly.

I went to bed, fearful of what the next day would bring. I wasn’t afraid of more killings. That thought hadn’t crossed my mind…yet. Instead, I feared the aftermath. The news of what had actually happened once the dust settled and the chaos ended. The body count. The grieving relatives and loved ones. I feared seeing Paris like it was just ten months ago. Paris in mourning.

But more than anything, I feared seeing my children’s smiling, innocent faces the next morning and having to tell them that something terrible had happened. Again.

11 Comments to The Attacks on Paris, Friday night