The week my kids and I moved into my Paris apartment was a blur. Close on the heels of my separation with their father, we were moving from the Middle of Nowhere, Loire Valley, where our farmer neighbors were suspicious of foreigners (of which I was the only one for miles around) to Paris, where our neighbors were a building full of strangers in every shape and color.

The day we got the kids’ stuff moved in, there was a handwritten sign in my lobby saying that there would be a wedding reception on the 5th floor that night. They excused themselves in advance for the noise and welcomed everyone in the building to stop by. You often see that wording, but I doubt many neighbors actually take up the offer. It’s just a matter of politesse.

My son, daughter, and I went out to a park for the day, and when we got home, we stood around gawping at our still sparsely furnished apartment and listened to the sounds of festivities coming from a few flights above us. I looked at my kids, who were watching the ceiling like they wished it were transparent. “Want to go to a party?”

We dug our nicest clothes out of our boxes, and I ran across the street to buy a bottle of champagne. Then we mounted four flights of stairs and knocked on the door where all the noise was coming from. And waited. And knocked again. The door flew open and an Indian man in a suit holding a glass of wine smiled at us and shouted, “Bonjour!”

“Bonjour,” I said, and told him we were the neighbors from downstairs. We had just moved in and heard the party and thought we would stop by to congratulate the bride and groom. My kids leaned forward and peered through the door looking for other children.

“You speak English!” the man said with a British accent and an enormous smile. “Well, I am the groom, and this beautiful woman is my bride!” He hugged a beautiful woman to his side. She wore a sari-like dress and lots of gold jewelry. My daughter “oohed” in spite of herself, and got showered with hugs and kisses because of it. We were ushered in and introduced to the bride and groom’s parents, siblings, cousins, friends. We were dragged onto the dance floor, and my children found some other kids to play tag with. We were made to feel like invited guests. We only stayed an hour. It was already late. But the goodbyes were as sincere as if we were old friends.

It’s been three years since the wedding, and I have only bumped into the couple a few times since then. They live half-time in London and we don’t seem to have the same coming and going hours. But every time we see each other they give a cry of delight and ask how we are. I passed the groom in the stairwell yesterday and he asked if my children had gotten much bigger than the last time he saw them. We agreed to meet up for a drink the next time they were around.

This is something I love about Paris. Yes, it’s a big city. Most people keep to themselves. Most people have their public mask. But sometimes you are let into someone else’s world, for a moment, for an hour, for an unpredictable and unplanned series of delightful encounters. People are the heartbeat of the city and every day holds an opportunity to sample the flavor of another soul.

The most awesome Patrick Ness and his Refugee Fundraising Drive

Unless you are living in the Flame-Fingers’ cave under the streets of Paris, you will have heard of the refugee crisis currently taking place in Europe. Last week, I was feeling sick-at-heart about it, so decided to donate the equivalent of a week of my rent to the Danish Refugee Council (they seem to have the most people on the ground around Syria http://drc.dk/home/.

A couple of days later, I heard about novelist Patrick Ness’s fundraiser with Save the Children. A lot of authors were teaming up to give as much as they could to help out. I decided to up my donation, and gave the equivalent of three more weeks’ rent, making my total donation 1 month of Paris rent. (Pretty much all my budget would allow.)

But I haven’t quite given all that I can. I think I can help out a little bit more, if it will encourage my friends and readers to give. By now Patrick’s fundraiser has raised almost a million dollars, with literary luminaries like Philip Pullman and most of the major publishing houses giving huge amounts as incentives for individuals to donate. Read through the list of authors who have donated. Trust me…it will bring tears to your eyes.

You can see it all happening live here, with a list of authors, and more donations coming in every moment:

Refugee Fundraiser, Save the Children

So here are my additional donations to encourage you all to give as generously as you can to this very worthwhile cause. Our fellow humans are in crisis. We need to help them. It’s as simple as that.

If you make a £500+ donation to the refugee crisis fundraiser organized by Patrick Ness, I will send you a box of delicious chocolates from Paris. 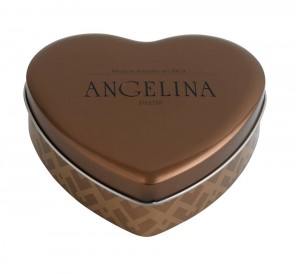 If you send £200+ I will send a signed and dedicated Amy Plum book to the person of your choice. 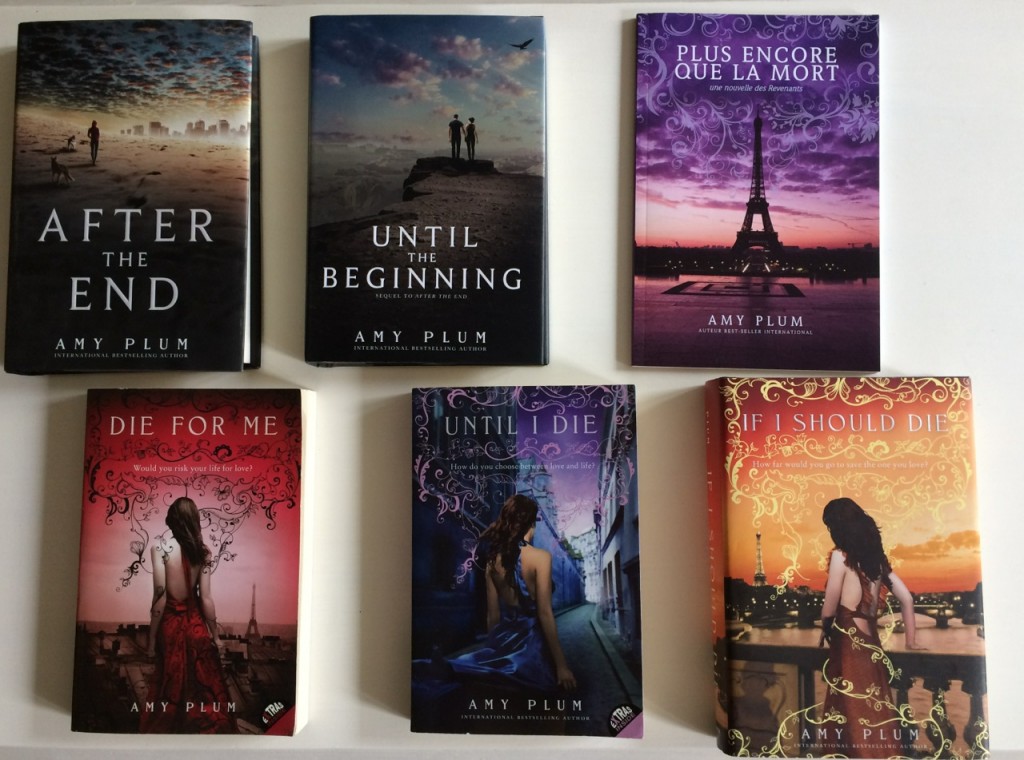 If you send £100+ I will send a birthday or holiday card to the person of your choice. 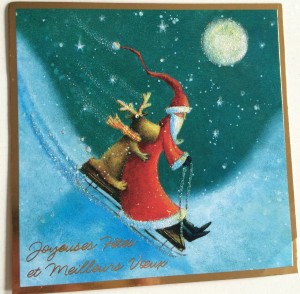 If you send £50+ I will send you a pair of signed and dedicated AFTER THE END original art postcards. 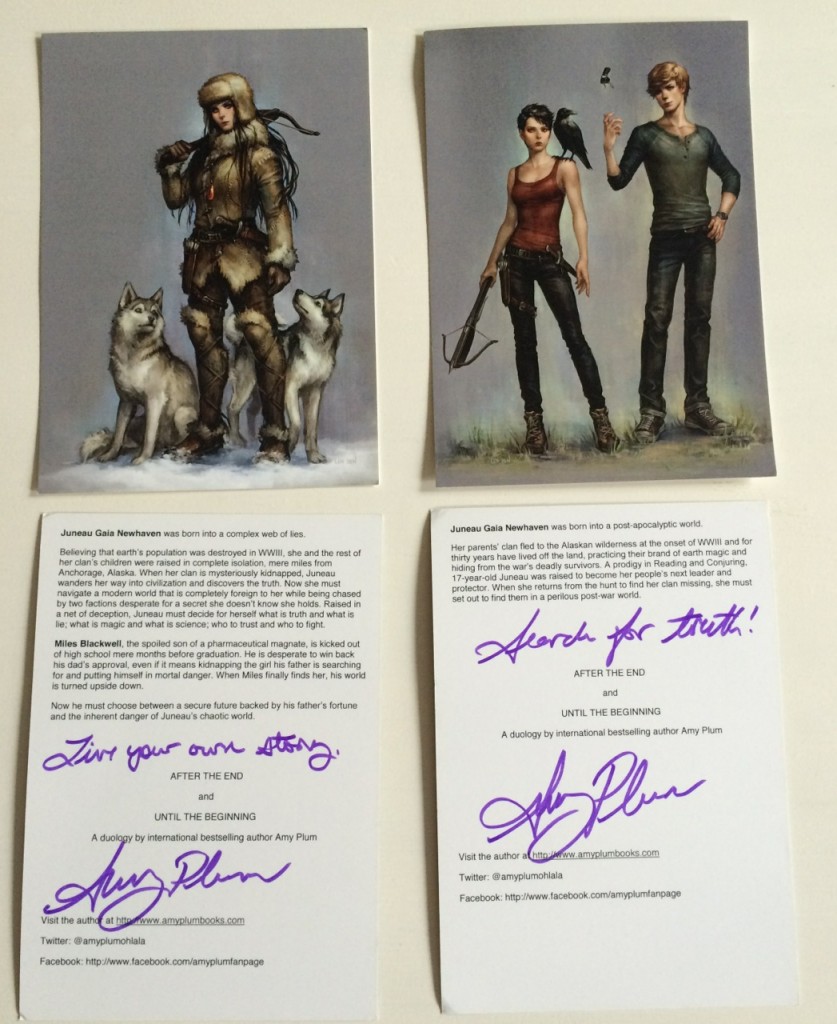 And if you send £1000+, I will make a video of myself in front of the Eiffel Tower singing Happy Birthday or any other song you request (warning…I am a mediocre singer) or reading whatever script you want me to, as long as it’s not anything worse than I’d say in real life. (Good luck finding something I won’t say in real life. ;)) 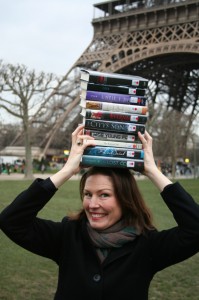 Just use the word “Plum” somewhere in the note accompanying your donation, especially if you donate as Anonymous. Then send me a screenshot by direct message or by email to katieloumercier@gmail.com and I will send you your prize.

And thank you in advance for opening your hearts and your pocketbooks to the horrific disaster that is unfolding just next door.