I recently embarked on an exciting project: self-publishing the French translation of my novella DIE FOR HER. My French readers have been asking me for it ever since it was published by HarperImpulse over a year ago, and because eBooks aren’t as big in France as they are in the U.S. (yet!!!), my French publishers decided not to do it themselves.

So Marie Cambolieu, who translated the DIE FOR ME series into French (and who is now also a friend and neighbor) agreed to do the translation. We chose to call it PLUS ENCORE QUE LA MORT, I somehow figured out the technical part of uploading a book to all the various online distributors and…VOILA!!! It was suddenly live—both in eBook format and in print version! (Which solves the whole eBook problem.)

My new challenge was how to let people know that the book was available. So I decided to go to THE EXPERTS. Yes, ladies and gentlemen…the rock stars of the book world…BOOK BLOGGERS. French ones. Ones I’ve met and know or who were referred by my readers. When Marie and I decided to hold an event in Paris to celebrate the release of the novella, I chose a small group of bloggers and held a contest to allow one reader to join us. (Blogger names + links at the bottom of this post.)

So one sunny May afternoon, the seven of us set out on a REVENANT ADVENTURE.

We started on the steps of the Église St. Paul, which is where Kate and Vincent had the joust conversation during which Vincent asks for Kate’s “favor” and she gives him a Kleenex. (Chapter 6, DIE FOR ME.) 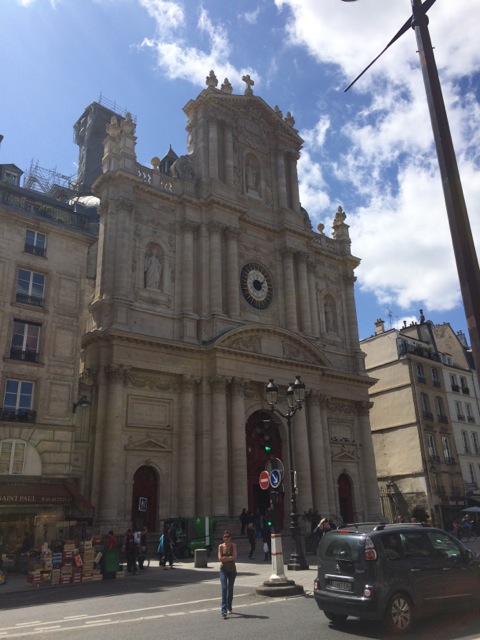 The group waiting for me on the steps of the Eglise St. Paul

I greeted the intrepid bloggers (plus the one contest winner) and told them about how these steps used to be my front porch when I lived in a tiny apartment in the building next door (at age 28). My friends and I would sit on “my” open-air veranda, drink wine from my mom’s vintage glasses and eat off my flea-market antique china. Those were such magical evenings, I HAD to include that location in the book. (Are you getting the feeling this book might be a little bit autobiographical? If so, you might just be on to something…) 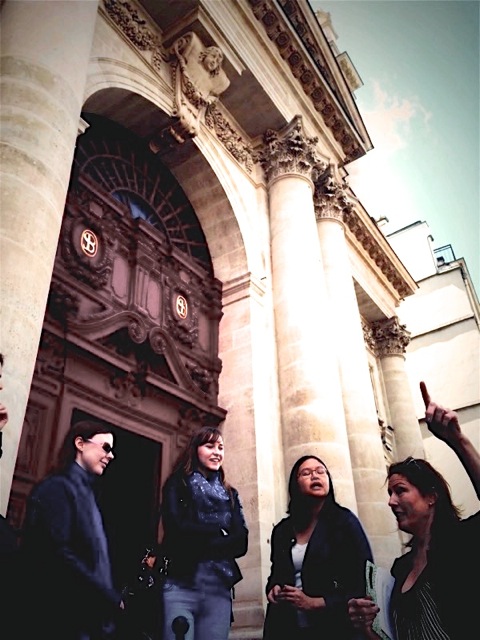 Laure, Heloïse and Francesca + me

As we did at all of our stops, Marie whipped out the French copy of the book and I read the passage that referenced the location. 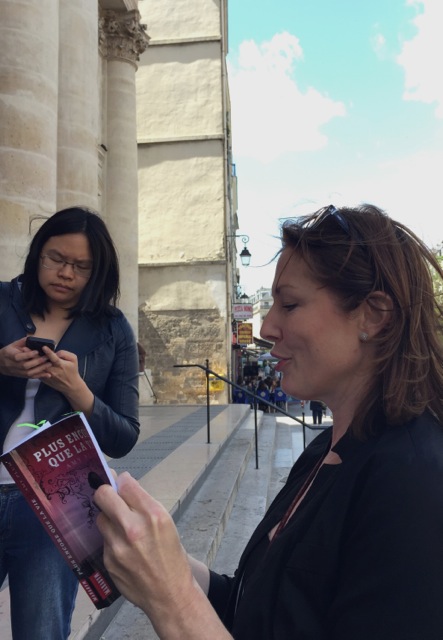 Francesca + me at St. Paul

From our starting point, we walked a few steps to a courtyard adjoining the church.  I showed the group where I had lived in the 1990s (97 rue Saint-Antoine) and described how—through the magic of fiction—I had transformed my old apartment into Jules’s painting studio for the DIE FOR ME books. Many scenes from the series take place here, including Kate and Jules’s introduction and the scene where a numa escapes by crashing through the window into the courtyard below. 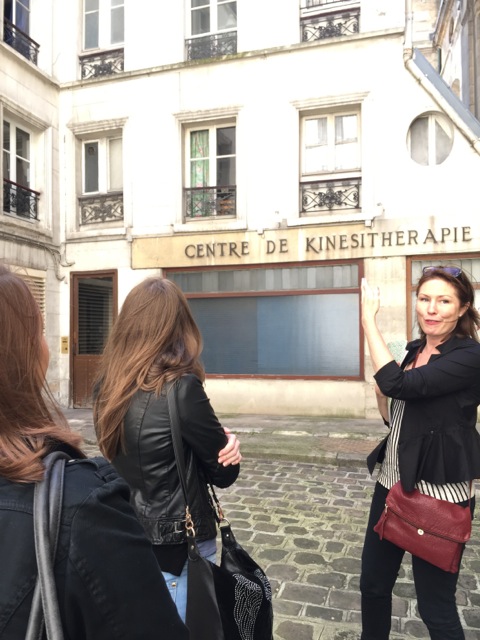 Next stop, a ten-minute walk away, we stopped at the Village St. Paul—a magical maze of connected courtyards lined with antique shops and cafés where you can wander in peaceful isolation from the bustling world outside. This was the site of Vincent and Kate’s first date, where he bought the necklace for Charlotte and they spotted Lucien. (Chap 6, D4M). 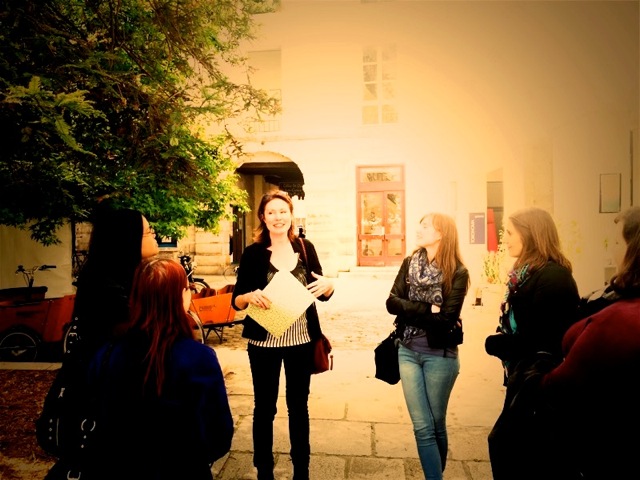 Telling the group about including the Village St. Paul in DIE FOR ME.

I told our group that when I lived in Jules’s studio, this was right down the street from me. The first time I went there, I was exploring my neighborhood and just stumbled across it. It was a revelation to me—this hidden treasure trove—because at that point it wasn’t mentioned in any travel books and was completely off the beaten path. Most of our group had never been there before, so I counted that as a small triumph! 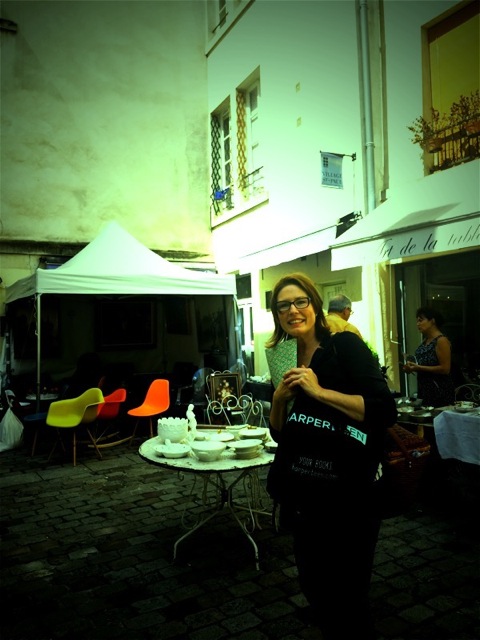 In the Village St. Paul, where an outdoor flea market was taking place.

Leaving the Village St. Paul, we wandered down to the river where I pointed out the park and quai on the eastern tip of the Ile Saint Louis, where Vincent and Kate had The Talk. (Chapter 15, D4M) It’s also in the very last scene of the very last book of the trilogy. Which was kind of intentional. Symbolically. And all. *coughs* *changes subject*

The next stop was a bit of a hike as we wound our way back up through the Marais to the rue de Rosiers. 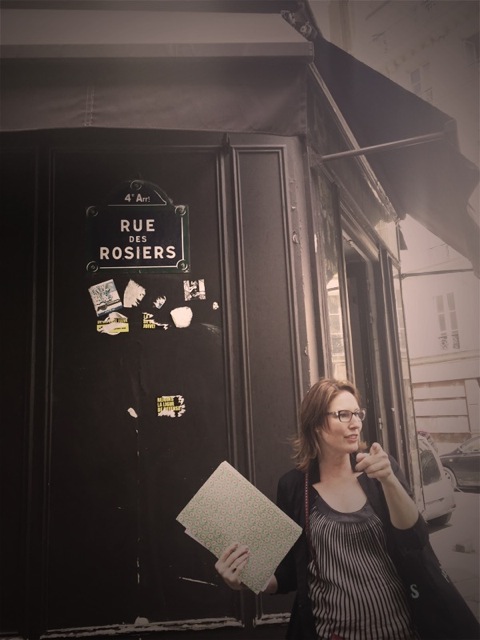 Me playing tour guide on the rue des Rosiers

I told the group about my fascination with the history of Paris during World War II. As the focal point of the Pletzl (the most famous Jewish neighborhood of Paris, dating back to the 13th century) rue des Rosiers was the site of some of the terrifying roundups of Jews for the concentration camps. I mentioned this in Chapter 18 of UNTIL I DIE, using a lunch date with Kate and Georgia to tell the story.

We wandered by the falafel shop where the sisters had lunch—a restaurant I frequented in the 1990s. (It is still there and still has huge lines of people waiting to buy their mouthwatering food.) 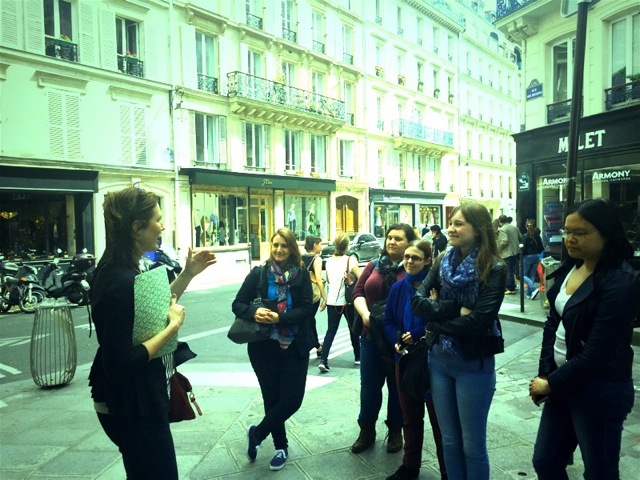 From there we wandered up the rue Vieille du Temple, where I pointed out the place that used to be a restaurant called Au Gamin de Paris and is now a clothes store. It used to be my favorite neighborhood restaurant, so that’s where I had Vincent and Kate go to dinner (the place with all the candles after The Talk in D4M). 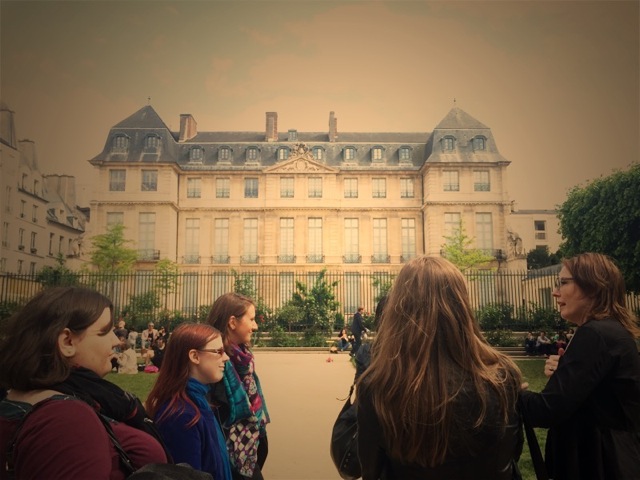 We proceeded north through the Marais to the Picasso Museum. I reminded the group about the scene where Kate bumps into Jules and Vincent (and Ambrose, volant), and has coffee with Vincent after Jules steams off in a huff. (D4M, Chapter 5) 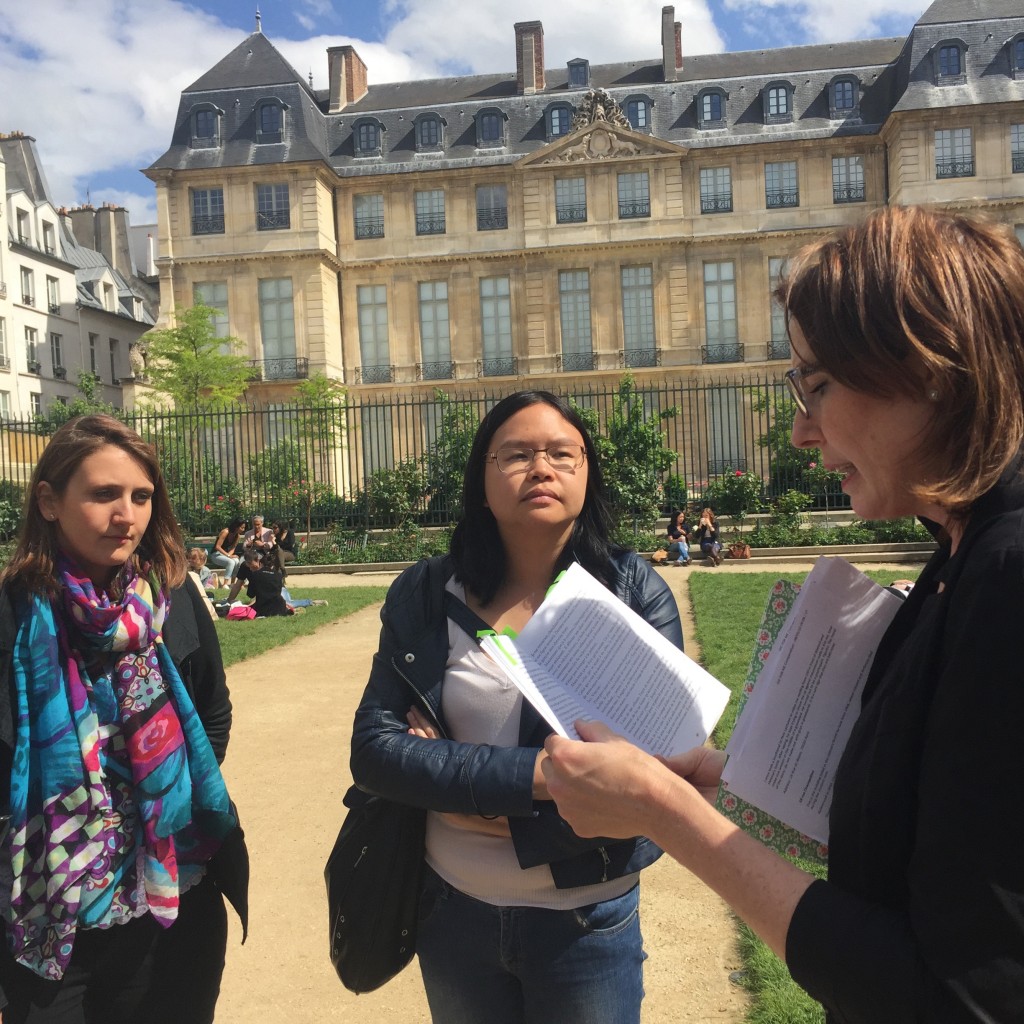 Reading from DIE FOR ME at the Picasso Museum

I took the opportunity to talk a little bit about the Paris artist community in the early 20th century, and why I decided to make Jules one of them. This is a big part of DIE FOR HER, and one of the aspects of the series that I had the most fun with. (Before becoming a writer I was an art historian, so I’m always fascinated by stories of artists’ lives.)

After that, we made our way to the Marché des Enfants Rouges—the covered market that provides the setting for Kate and Violette’s lunch in UNTIL I DIE. (Chapter 11) 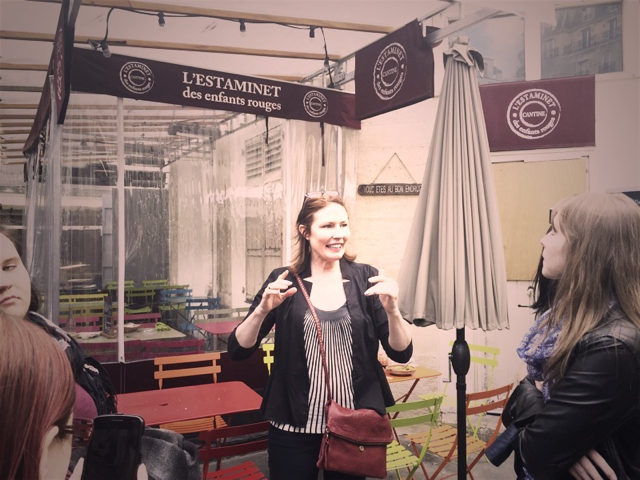 I told the bloggers of how I had always thought “The Market of the Red Children” sounded Stephen King-style creepy. Knowing that Kate and Violette needed a place outside of La Maison to get to know each other, I decided to send them there. This is the restaurant where they ate. It’s one of my old hangouts, and is especially good for brunch! The market itself is a sensory delight, and most of the group had never been there before. (Another triumph of the day!)

From Enfants Rouges, we made our way to the Passage du Grand Cerf. This is where the numa-bardia fight took place in IF I SHOULD DIE, Chapter 44. (The one where Geneviève is killed and her corpse kidnapped. Also where Louis crosses over to the good side.) 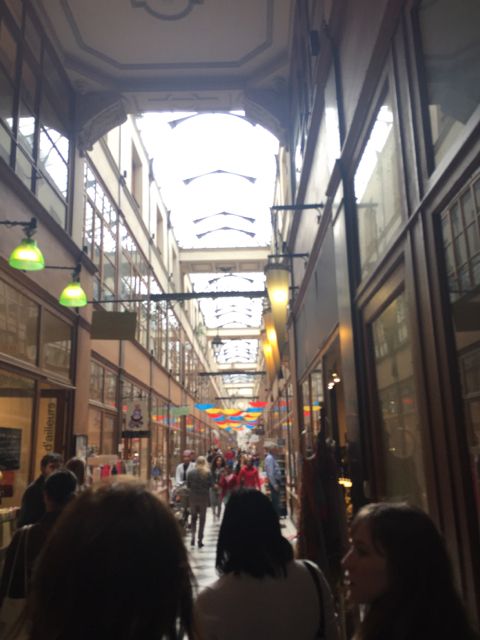 We wandered through the covered passageway and gawked at all of the beautiful shops. I talked about how, when I was thinking about where someone could have an armed skirmish in Paris without drawing a lot of attention, I walked past this passage and thought PERFECT! 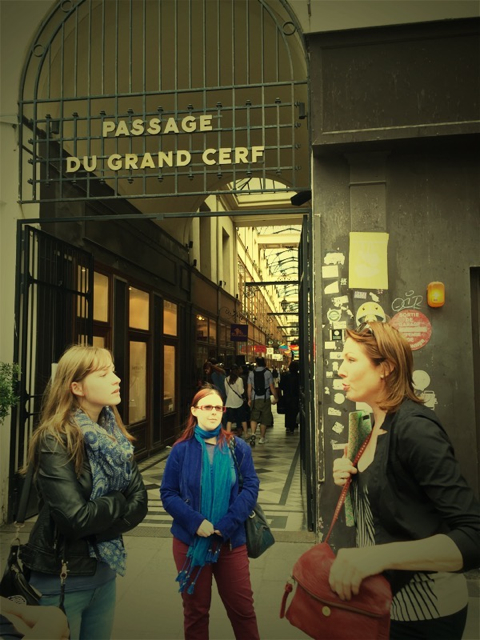 Explaining why I chose this passage for the skirmish scene.

This battle was one of the most visually charged scenes for me, especially when Charles and his clan of punk-rockers arrived with the music and tipped the scales in the favor of the bardia. I still see that in my head like it was a real event, and feel lucky to have been a spectator. 🙂

Our penultimate stop was supposed to be the Pont des Arts (site of The Kiss), but the wind was starting to pick up and we had already been walking for three hours. So we skipped it and went directly to the Square du Vert-Galant, which is at the western tip of the Ile de la Cité.

(In the books I mistakenly called it Place Dauphine, which is just a stone’s throw away, but which does not border the water. Now you know one of the super-secret D4M factoids!) 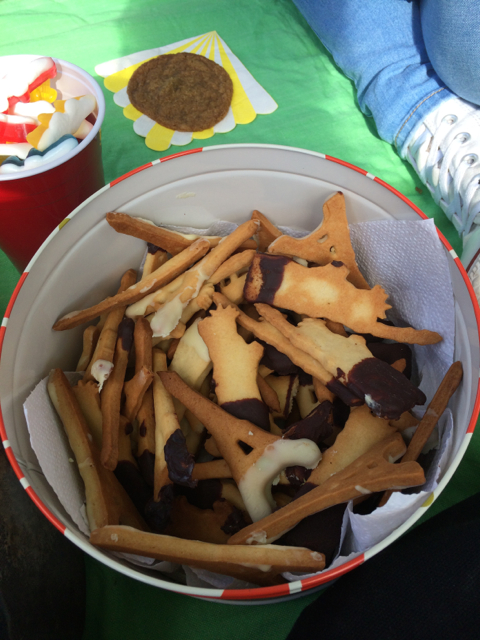 Marie’s oh-so-cute (and delicious) New York and Paris themed cookies, gummy candies, and one of my chocolate chip cookies: a culinary mash-up of America and France!

Marie and I had made cookies and brought a few bottles of flavored limonades (it’s like Sprite but a million times tastier). We sat on blankets and munched cookies while I reminded the group that this was the site where Vincent gave Kate the signum bardia after the revenant wedding in La Sainte-Chapelle. I had brought them to the very spot where I had seen Vincent and Kate sit (in my mind), legs hanging over the side of the quai as they talked and watched the boats go by. (UID, Chapter 23) 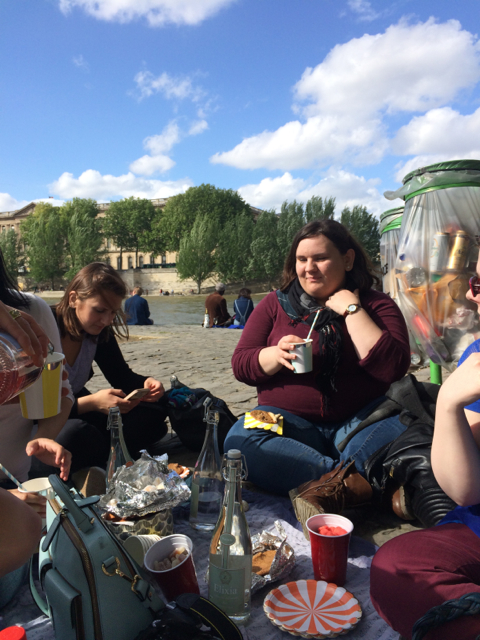 Then I passed out copies of PLUS ENCORE QUE LA MORT, as well as postcards and other goodies (some of which will be offered in contests by the bloggers) and answered questions about my books. Marie, Francesca and Justine at the Square du Vert-Galant

It was at this point that I told everyone WHY I had self-pubbed PLUS ENCORE QUE LA MORT (the French version of DIE FOR HER). Since I live in France, my French readers are extremely close to my heart. And after having them ask me repeatedly when DIE FOR HER would be published in French, I finally cracked and decided to do it myself. It’s not a moneymaking venture—it’s solely for the enjoyment of my fans. That leaves only the second novella—DIE ONCE MORE (Jules in New York/Paris)—unpublished in French.

Here I am describing the two novellas in my very embarrassing American accent. (And switching between French and English in mid-conversation, which I do all the time and can’t help for the life of me.)

I read the beginning of DIE ONCE MORE, which Marie had translated for the occasion. We were going to post a video of me reading it, but I was so horrified by how awful I sound reading French that I concluded it would be kinder to you (and your ears) to just give you the text.

So here is the first chapter of DIE ONCE MORE in French. If I sell enough copies of PLUS ENCORE QUE LA MORT to cover publishing costs, I might be able to self-publish this novella as well. Stay tuned for updates!

Finally, we climbed the stairs to the Pont Neuf where we posed for some photos before saying goodbye. 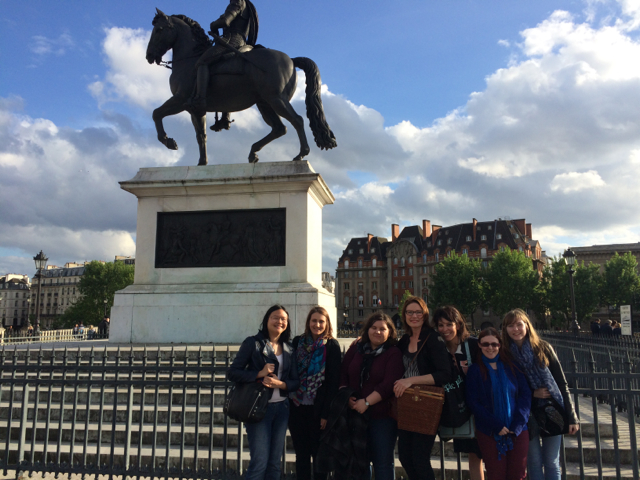 Our group posing next to Henry IV, who, coincidentally, is a huge fan of the DIE FOR ME books. Our team of revenant hunters: Laure, Heloïse, me, Marie, Francesca, Justine and Léatitia

It was an amazing day, and truly wonderful to be able to hang out with some of my favorite French bloggers and readers. Definitely on my “to repeat” list!

If you would like to get your own copy of PLUS ENCORE QUE LA MORT, here are a few links:

And here are the links for the blogs of our intrepid revenant hunters:

My Bookshelf is Yours (Léatitia)