10:30 I start my day with an intellectual talk on “pursuing fugitive traces of the past”—which basically means researching rare documents to uncover previously unknown tidbits about Shakespeare, Leonardo da Vinci, Jack the Ripper and the like. The speaker is Charles Nicholl and he’s chaired by Stuart Kelly and it’s fascinating and so scholarly it kind of makes my brain hurt.

Next event: Daniel Tammet talks about his book “Thinking in Numbers.” It is billed as “An event which should open the eyes of maths geeks and numbers skeptics alike,” (myself being in the latter group), but he actually doesn’t say anything to convince me of the beauty of numbers. However, I find his description of his “high functioning autism and savant syndrome” fascinating, as well as the fact that he had to train himself to relate to people. (A feat, I suppose, for someone who can recite pi from memory to 22,514 digits in five hours and nine minutes.) I decide to order his memoir BORN ON A BLUE DAY.

Daniel lives in Paris. I think of introducing myself, but chicken out. It would be like meeting David Sedaris, whose writing I admire so much, but to whom I would have nothing to say besides raving about his books, which I’m sure gets old fast.

I float back to the Author’s Yurt thinking of numbers having colors and shapes and how different brains work, and wishing that my brain could sometimes be practical instead of ethereal- and emotion-based and suddenly find myself face to face with Charles Nicholl who is looking at me like he knows me. “I enjoyed your talk this morning,” I say, and he replies, “Oh yes, I saw you in the audience.”

(Speakers always thank me for smiling at them and tell me it’s encouraging. I don’t even know that I’m doing it—it’s like a weird subconscious cheerleading thing. Or maybe it’s the attentive look that I developed in grade school specifically to be teacher’s pet. How annoying that it still remains.)

So he and I get onto the topic of France, and his son who is moving to Paris in a  week to attend Science Po (a good university) and how Charles and his wife live in Italy near Lucca, which is one of the prettiest towns I’ve ever set eyes on.

It’s time for my next event, and I run off to a talk about women writers being parents by Rachel Cusk & Gaby Hinsliff. They talk about feminism, reverse feminism, and how many women give up high-powered careers in order to focus on what is more important in life, and at the end I’m honestly feeling a bit despairing and depressed.

I quickly repair to the Author’s Yurt, where I spy steaming food on the back table. Much to my joy there is a label saying, “Haggis, neeps and tatties” in front of bowls with three scoops of different colored stuff in them. The reason for my joy: Kimbery Derting has dared me to eat haggis, and I can never turn down a dare.

Linda Strachen, the person I had been introduced to the day before as “Linda who knows EVERYONE” sidles up to me, and I say excitedly, “Look! It’s haggis!” Being Scottish and probably having eaten a kazillion haggises in her lifetime, she smiles patiently at me and even holds my drink while I take a picture of it. 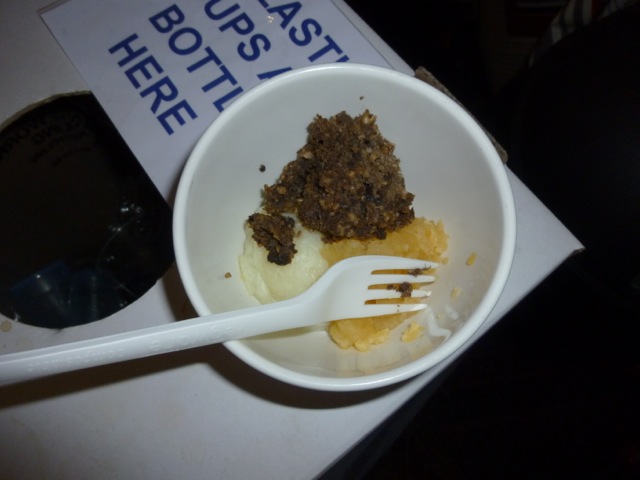 Haggis served with "neeps and tatties" (Scots: turnip and potato) The haggis is the brown part.

I sit down on one of the couches to eat, and as I finish, I say proudly to the man next to me, “I just ate haggis.” He says, “You realize that’s like eating a scab.” I suddenly want to thump Kimberly Derting, but instead ask what he writes about. “Politics,” he responds.

Oh shit, I think, but I smile nicely and ask what his book is about. It’s something about defending democracy, and he’s a professor at the University of Sheffield, so I decide it’s probably not the brightest idea to attempt to engage him in any serious way on his topic. I ask a few polite questions and tell him that I was an anti-war marcher who disengaged from politics in despair after George Bush won the second time, and after that I feel like I have contributed enough to that particular conversation.

Then he asks me what I write about. “I write paranormal romance for young adults,” I say. He stares at me blankly. “Have you heard of Twilight?” I ask. “I have teenagers,” he replies, nodding. “Well, I initially pitched my book as ‘Twilight in Paris with zombies,’” I reply.

Oh shit, I see him think. Since he had just mentioned how hard it is to talk to some audiences about his stance in politics, I pick up that thread and tell him how hard it was to talk to an amphitheater full of hysterical French teenagers right after Ian Somerhalder left the stage. Although that took an explanation of what Vampire Diaries is, and what a sex symbol Ian is, but I think in the end he kind of understood. So I think, My job of YA evangelism is done here, and I get up and join Linda and walk with her to the next talk, “The Performing Writer.”

This features a panel of Lindsey Davis (crime writer), Tania Harrison (organizer of the Latitude Festival), and Angela Robertson (with Canongate publishing) chaired by Angus Konstam. They talk about the importance of Twitter and Facebook and self-proclaimed old-school Lindsey cracks me up by saying something like, “If the fans want to know about me they can come to my website.” Afterward, much to my pleasure, Linda invites me to dinner with the entire panel plus a few other people. (She DOES know everyone!)

We eat huge piles of tapas and chat about everything under the sun and the way Tania talks about the Latitude Festival makes me want to go next year. (They have dyed sheep wandering around the festival, for god’s sake – how can I miss that?) 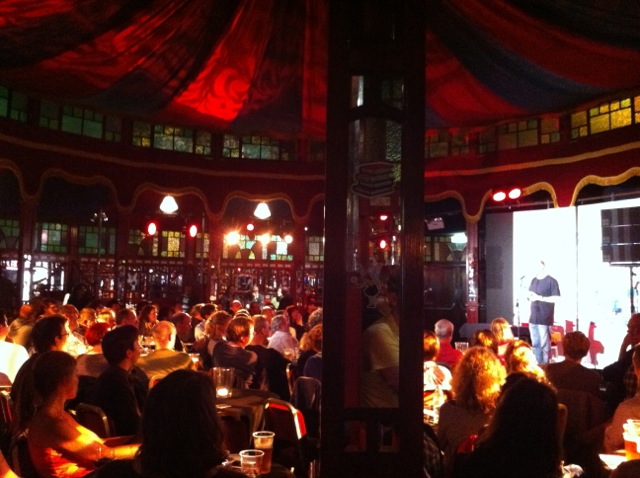 Magic night at UNBOUND in the Spiegeltent

Afterward, I dash back to UNBOUND since I promised the organizer I would go. I spot Jonathan Ley with a table of his friends and sit with them and watch magic tricks and listen to some creepy magic-themed stories until the day is long gone and I flit back past the castle to my hotel.