I’ve had so many questions about the signum bardia that I thought I would show you some pictures of what I based it on and give you an idea of the mythology behind it.

In the book, I wanted Vincent to give Kate something to show she is under the protection of the revenants. As Vincent explains it (UNTIL I DIE, Chapter 23): “It’s a signum bardia. A signal to revenants that you are attached to us. That you know what we are and can be trusted.”

Kate’s signum comes in handy when she meets Gwenhaël, of course, and you’ll see even more signums in Book 3.

So what is a signum bardia? It’s…um…something I made up. The Latin word “signum” means: “sign, seal, mark, token.” And I chose the term “bardia” for the good revenants because it means “watch” or “shift” in Greek. As in the watching over of humans that our bardia specialize in…the shifts they take walking together in threes (2 + 1 volant).

So a signum bardia is the mark of the bardia—their token.

Once I had the term I wanted, I had to decide what symbolism it should hold.

First I thought of self-sacrifice, and used the medieval image of the pelican piercing its breast to feed its young with its blood. Um…yeah. That’s my geeky art historian side coming out. I wish I still had my first attempt at drawing it. It looked more like an epileptic swan than this: 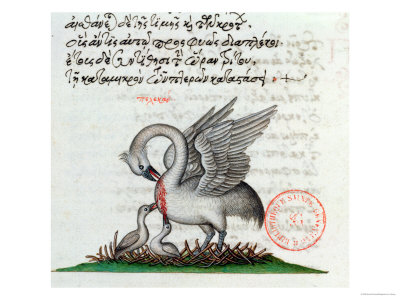 Pelican piercing his breast from a 16th century bestiary

You did know I’m a medievalist, right? Well, now you do. (By the way, that’s a very good thing to say at a party if you don’t want anyone to talk to you. And then you can bring up the subject of pelican blood, and people will literally flee. Just sayin’…)

Back to subject. The pelican was too hard for me to draw, much less for me to describe over and over. So I went for simple. What easy shapes can communicate a message? I’ll let Vincent describe what I came up with:

“…the pyramid is supposed to mean life after death, and its three corners signify our three days of dormancy. The flames represent our aura and the only way we can be destroyed. And the circle is immortality.”

While I was coming up with the symbolism, I had this ring in mind: 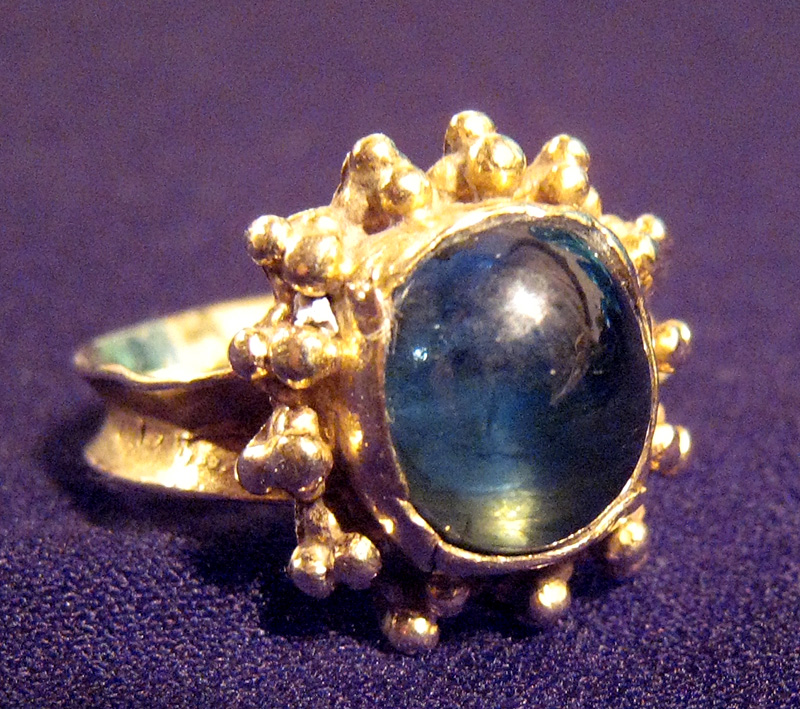 9th century Byzantine ring with cabochon sapphire. (Cabochon means it's smooth instead of cut and faceted like most jewels are.)

I thought if I made the sapphire into a triangle, that would be a good start. But I wanted more. So I perused a few of my books on ancient jewelry (see…I told you…certified geek) and I found this: 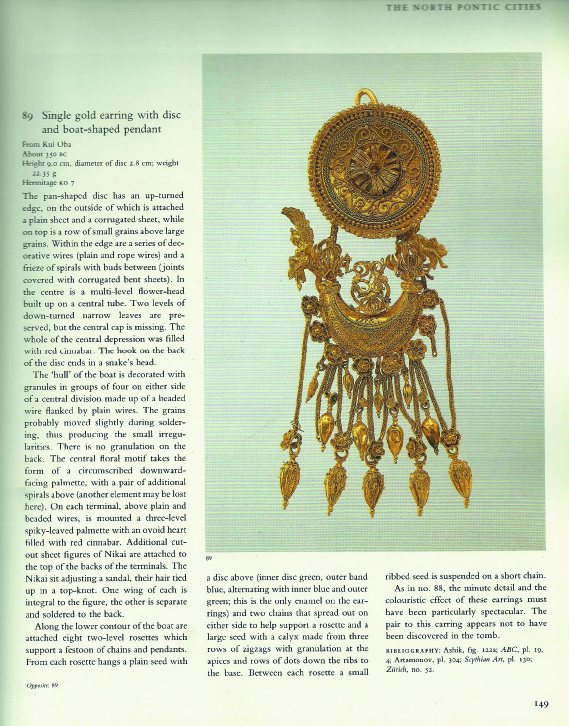 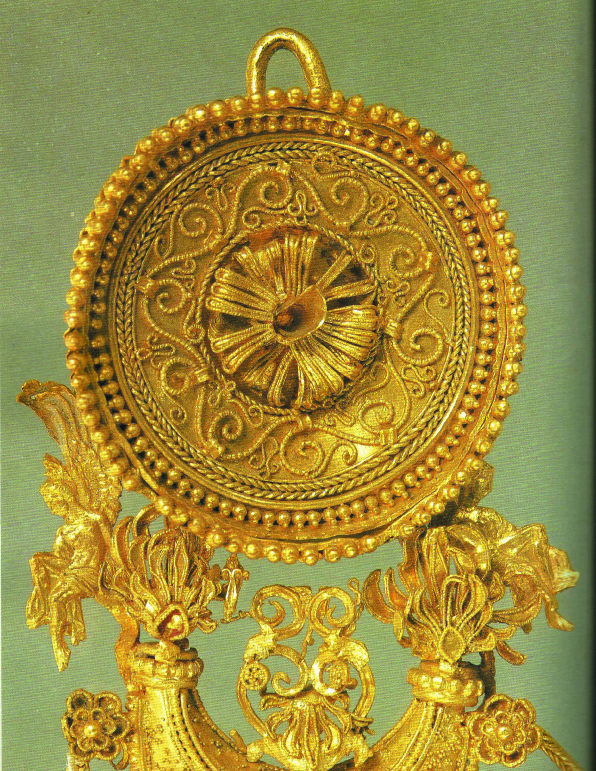 Close-up of the upper part of the earring

It has the same double border of gold pellets as the ring, but also decorative swirls inside the circle that could be made into flames. If you put a triangular sapphire right in the middle, it would be perfect.

So I waved my magic author wand, mixed the two pieces of jewelry and added some flames and it came out like this:

“It was a gold disk the size of a dollar coin, and it was edged with two circles of tiny gold pellets, one nestled within the other. Set in the center of the disk was a dark blue triangular stone with a smooth, slightly rounded surface. And in the space between the stone and the rows of pellets were decorative gold wires curved into the shape of flames. It looked ancient, like the Greek jewelry in Papy’s gallery.”

As for Kate’s signum’s history, I let Vincent describe it thus:

“…the treasury belongs to France’s revenants. The pieces have been passed down for millennia. This one is logged into our records as last being used by one of our emissaries to Constantinople in the ninth century.”

But, for me, as beautiful and priceless as the signum itself, was Vincent’s motivation to give it to Kate:

“This isn’t just from me to you. It is from all of us to you. I saw how upset you were when Arthur said you weren’t one of us. I want you to know that you aren’t an outsider. You aren’t a revenant, but you are still one of us. This signum means that you are kindred.”