Yesterday I did something I’ve never done before.

I sat for an hour in a crowded amphitheater, watching one of tv’s hottest sex symbols work a roomful of hundreds of screaming, tearful French teenagers, winking, waving and throwing kisses to the crowd as every word of his interview was translated for his adoring fans.

When his time was up, he left, I stood up, walked over to his chair, and sat my butt down where his had just been. (And refrained from picking up his half-full water bottle and pressing my lips tenderly to the bottle-top.)

And for the next hour I talked to a roomful of over-excited French teenagers…in French. And they understood me. And they even cheered a few times and whooped when I said how much I loved Paris and gave me huge rounds of applause when they liked my answers.

I could seriously get used to this.

Here’s how it went down:

The setting: Welcome to Mystic Falls 2 Conference, in the Forum des Images, Paris. I am supposed to get there at 2pm on Saturday to hear Paul Wesley be interviewed, but can’t get a taxi outside my apartment and finally end up taking the Metro, which means I arrive all sweaty. (Joy.) I’m not quite sure where in Les Halles (an underground shopping mall/conference spot) I’m supposed to go, but know I’m on the right track when I see a few hundred teenagers standing outside a door.

I make my way through the crowd and walk up to the guard at the door. “I’m Amy Plum,” I say, “One of the authors taking part in the conference.” The guy signals for a girl wearing an earpiece and I get ready to go into a long explanation of who I am.

“Amy Plum!” she exclaims before I can open my mouth. “This way.” And she leads me upstairs to a table full of books with Rachel Caine sitting behind it. “Rachel!” I say, glad to see someone I “know,” even though we have never met before. (In my world, living an ocean away from most of my colleagues, internet introductions have to serve as a substitute from real-life meetings.) 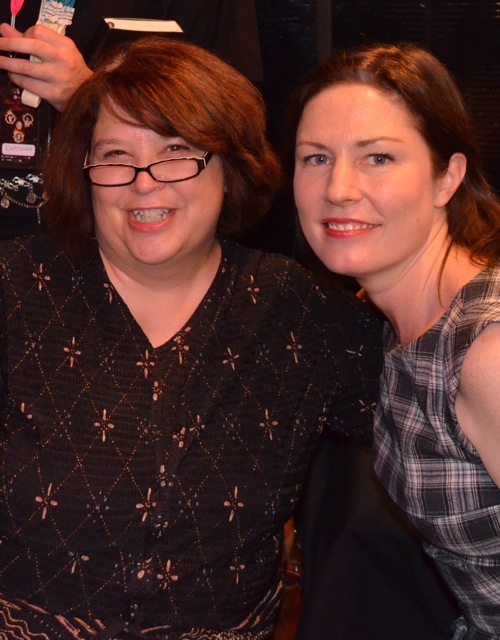 I sit and talk to Rachel and her artist husband, Cat, while she signs books. From time to time one of my own readers comes up and asks for an early signature. (I am scheduled to sign the next day.) 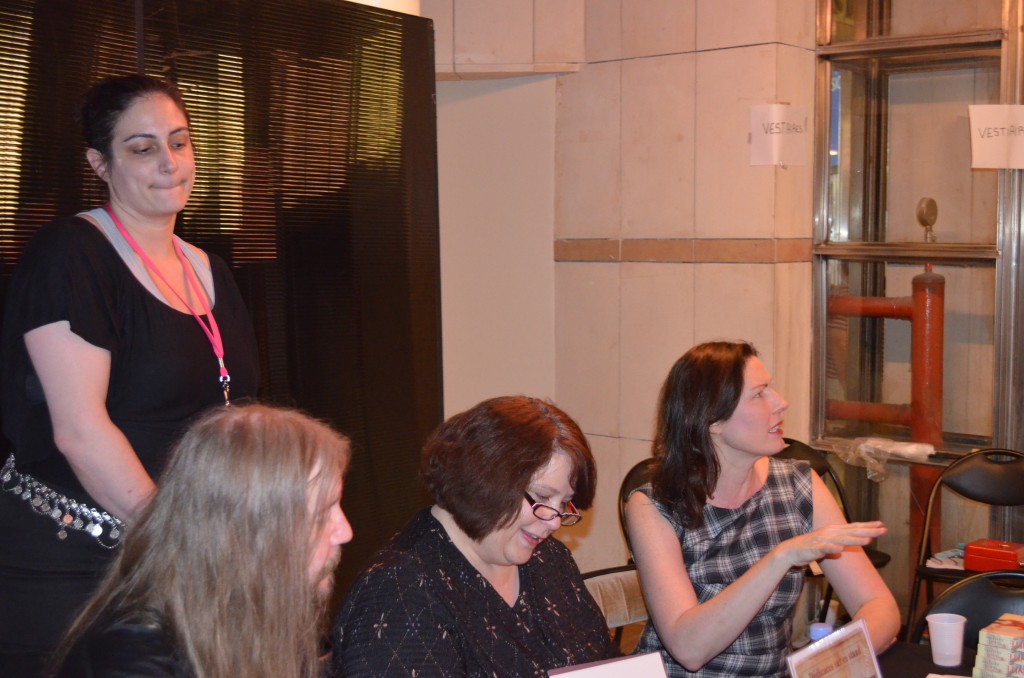 Afterward, I watch Rachel interview in front of an amphitheater full of convention-goers. 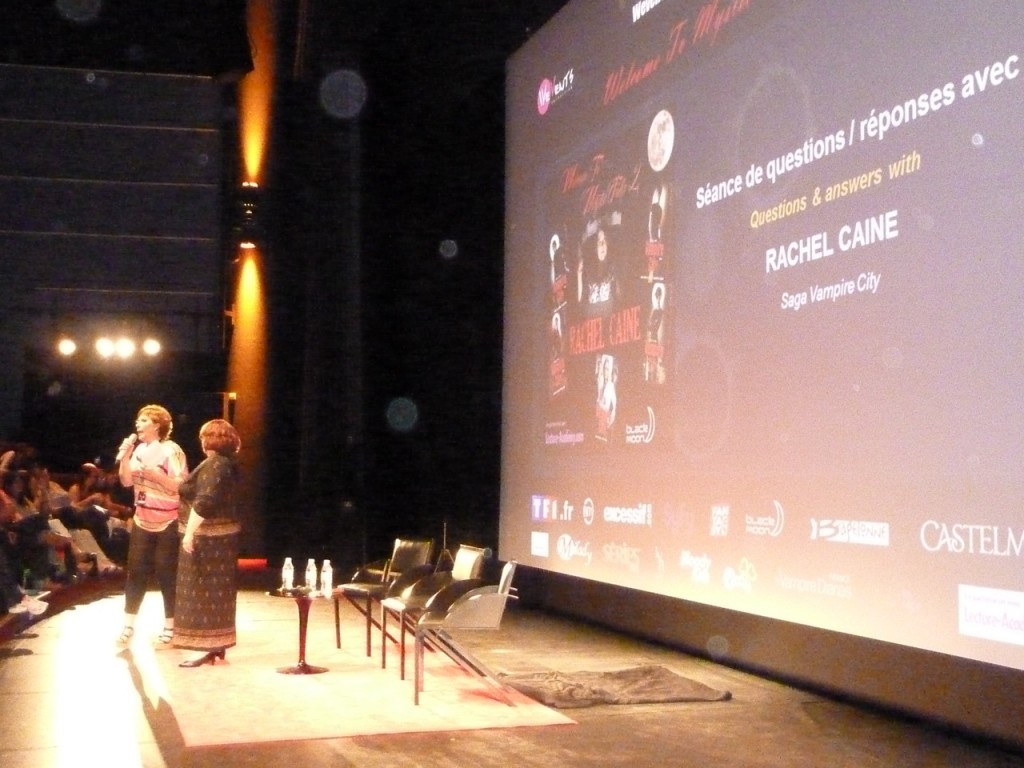 I love listening to other authors talk. Learning about how they work is fascinating to me, and since Rachel’s been in the business a long time she has a lot of good stories. As usual, I take mental notes of all of her good answers, in case any of the same questions come up for me in the future!

Afterward, it is time for my photo shoot with the Vampire Diary actors. I am led to the front of a line of a hundred or so people who paid (a lot!) to have their photos taken with the stars. I feel like apologizing for cutting in line, and then remember I am there for business and sashay straight past the crowd and through the doors to a tiny room where the photographers and organizers are waiting for the stars to be ushered in.

I stand around for a few moments feeling useless until suddenly I think, Hey, I should get out a couple of my books and ask the guys to hold them, while halfway wondering if the bodyguards stationed all over the place might tackle me for doing something that hasn’t been foreseen and approved by the earpiece guys.

Minutes later, in walk a whole crowd of people surrounding Ian and Paul, and while the room breaks into kerfuffled pandemonium, I walk up to Ian and introduce myself. “Hi, I’m Amy Plum, one of the writers here at the conference,” I begin.

His eyes light up in recognition. “Oh yeah. You live here in Paris, right?”

“Um…yeah,” I say, wondering how he knows that, and then remember that several of my readers had the nerve to Tweet him saying things like, “Ian…you’re so lucky to be meeting Paris author Amy Plum at the conference today.”

I begin to waffle, “Right. A lot of your Twitter followers have been writing me.”

“Yeah. Hopefully that’ll give you a lot more followers,” he says. “So you actually live here in Paris?”

“About 15 minutes away,” I confirm, and then cringe because it comes out sounding like an invitation. Although by that point the Damen vampire mesmerizing thing has started to work and I am internally debating handing him my apartment keys.

“You’re so lucky,” he says. And I think, In which alternate universe am I luckier than Ian Somerhalder?

“So you’re the author. Congratulations!” he continues, really enthusiastically. I wonder if he is getting me mixed up with someone who just won the Pulitzer. And then he pats me on the arm and says again, “Congratulations!” and I realize, He has no idea who I am, and decide then and there to steal his tactic whenever I meet someone I’m supposed to know but have no clue who they are.

Because, honestly, everyone has done something that is congratulations-worthy. So I decide to take his words to mean, Congrats on publishing two books and living in Paris, and say, “Thank you.”

Someone comes up and grabs him and I walk over to Paul and introduce myself. He’s really sweet, but kind of dazed, glancing around the room like he doesn’t know what’s going on. And then I realize that a million people are yelling around him in a language he’s probably not fluent in. Someone calls that it’s time to get started, so I translate it for him and, hearing something explained in English, he immediately looks more grounded.

Paul laughs, and Ian gives me this one-eyebrow-up scorching gaze, holds my book up in front of him, leans in really close and says in a low voice, “I’d be happy to hold your book.” And then grinning like he just said something very naughty, he gets into place next to me and puts his arm around me. Paul takes the other side, and we start taking pictures. 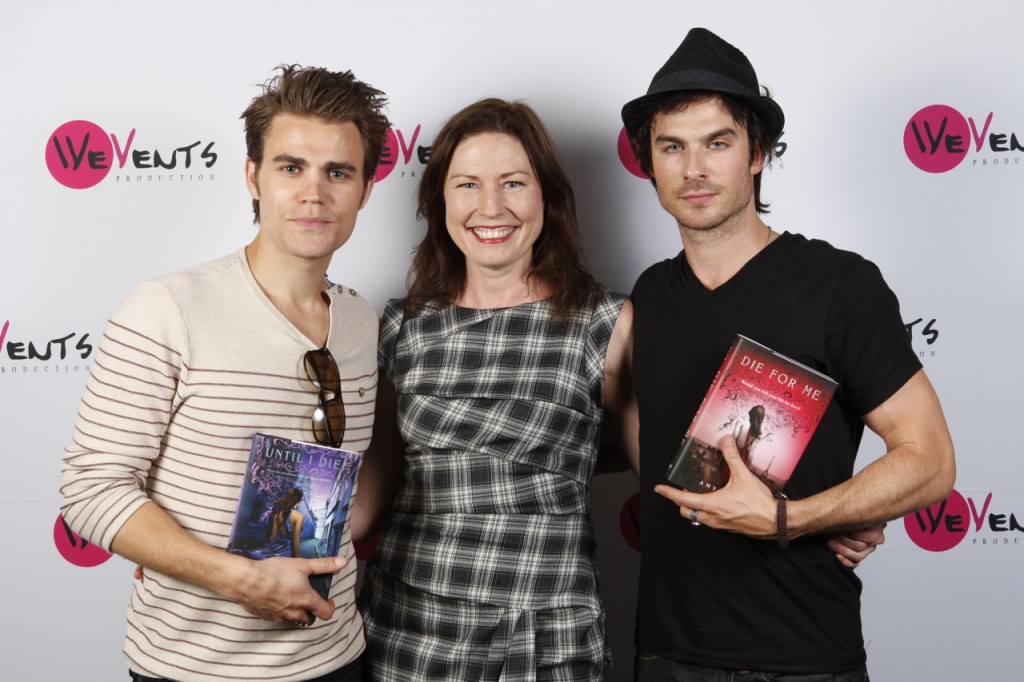 Where's Ian's other hand? Um, yeah. Drawing circles on my back.

And then Ian starts running his fingers around my back and I glance over at him like, What are you doing? and he says, “Paul, stop grabbing my ass.” At which point I burst out laughing and this picture is taken: We took one more shot, which I won’t show you because I look awful, but here is Ian: who, just after we finish, starts asking me when the books will be published, and posing all sorts of questions and acting interested, which I think is really sweet.

The “handlers” bring the first fan in for her picture, and I go over to get my bag, but Ian keeps yelling, “Congratulations!” and “Have a great time!” and “Enjoy!” and now that I’m not longer on a business mission and don’t have to keep my composure, I start blushing furiously and book it out of the room as fast as I can before I melt into a puddle of goo.

I meet Rachel at the top of the stairs, and explain that I just took a picture with the guys. “And now I’m so hot!” I say, fanning myself. Her husband cracks up, and I say, “I mean, it was boiling hot in that room with all of the lights!” and he says, “Right!” and gives this knowing smile.

I’m sitting in the front row of a packed-out amphitheater watching this: 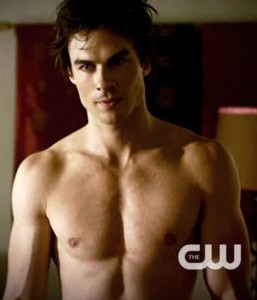 Ian holding up fan-made sign "Save Water, Shower with Ian"

and the place is going crazy, with girls screaming “Je t’aime, Ian” and him yelling “idem” back to them. And he’s blowing kisses and winking and waving and I can’t help but laugh my head off because it’s so ridiculous. And just when I have this incredulous I-can’t-even-believe-this-is-happening look on my face, he glances over at me and gives me this sheepish smile and shrugs like, “This is my life.” 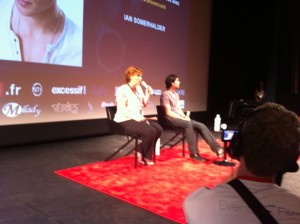 After about an hour of this, we pick up where I started this blog post: with me taking Ian’s place in front of an enthusiastic crowd that just saw the object of their affection replaced by an American author most of them don’t know from Adam. Patricia, the interviewer, says, “Just let me go get my questions,” and then leaves me alone on the stage, bright lights in my eyes, video cameras rolling, and several hundred people sitting there staring at me. Waiting.

So I pick up the microphone and say in French, “Hi, I’m Amy Plum. And I’m going to try to do this interview in French for you today.”

There is a second of silence, and then crowd goes wild, cheering and clapping. I do my incredulous face again, but only internally this time, and think, Okay. These people want to be entertained. So for the next hour, I try to do just that.

After being introduced by my French publisher, who came up from Toulouse for the event, I read—in French, for the first time—the most exciting passage I can think of in Book 1 (where Jules jumps in front of the Metro). And then answer all of Patricia’s questions (in French), only having to ask for a word a couple of times.

I am amazed that I’m doing this well. I can only imagine that the adrenaline from having people actually cheer for me is doing something to the language-center of my brain, allowing me to pull better French out of my hat than I ever imagined I possessed.

At one point I actually test the audience, and ask, “Do you understand my French?” and the crowd goes ape-shit again. And you should have seen the place when I told them that I was in love with two cities: New York and Paris. Whoops and yells and applause. It is INSANE. And I love every second of it!

After an hour Patricia thanks me for coming and I go sit behind a table stacked with my books for my signing (supplied by a local indie bookstore). Before I can even get to my seat, the crowd floods out of the room and heads straight for me. About half are readers who have already heard of me, but the rest come because of my talk.

I get compliments on my French (still much to my amazement), and several people say, “With the way you described your book, I just had to come buy it!” I consider myself a terrible salesperson, and in my interview I truly just spoke from the heart. Which means that my words actually reached people. They liked what I had to say. I can’t even tell you how good that makes me feel.

When it was all over, the indie bookstore manager told me I sold more books than anyone else at the conference. Which, to me, was better than a hug from Ian Somerhalder. Okay, I’m lying. Not quite as good. But close.

I will be doing another reading in French at the Paris indie bookstore I mentioned (l’Antre Monde) on June 26, and one in English at W.H. Smith on June 16. Check my Events page for details!

From the eyes of the fans: