(This tour journal starts in New York City, continues through the Appalachians, and last post was Lexington, Kentucky.)

Kim and I spent the next day driving through the rolling hills of Kentucky, past vast green pastures dotted with grazing horses. The horse-racing vibe was so strong, it made me want to wear a huge hat and hold opera-glasses to my eyes as we drove through the state (à la Audrey Hepburn in My Fair Lady).

We arrived in Nashville around lunch time and drove around the downtown until we found a neighborhood that had decent-looking restaurants. 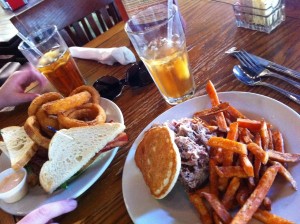 We wandered into one called Pucketts, and promptly ordered iced teas, a fried green tomato and bacon sandwich, and a barbecue sandwich with sweet potato fries. (Followed by chocolate chess pie.) I couldn’t have asked for a tastier welcome back to the deep South! 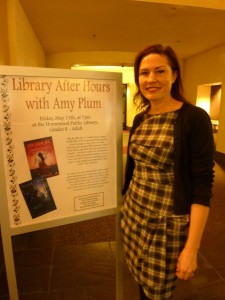 My hometown library: The Homewood Public!

A few hours later we rolled into Birmingham, ran to our hotel for a quick costume change, and then arrived at the Homewood Public Library to find that the librarian, Heather Cover, had set out a whole spread of refreshments, complete with Eiffel Tower and skull decorations. 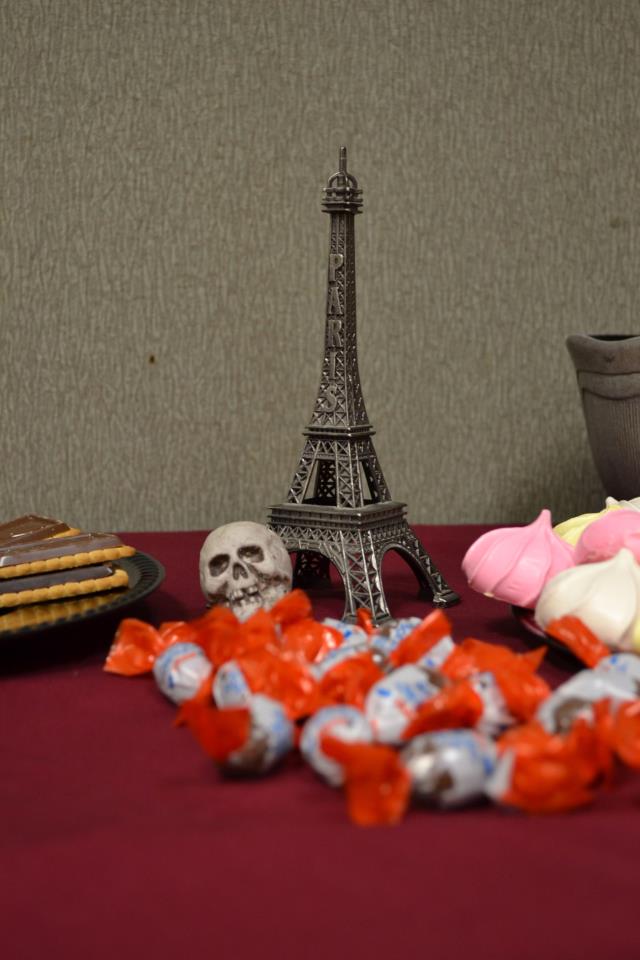 Adding sentimental value to the location was the fact that Homewood was my local library when I graduated from Homewood High School. And the bookstore that provided the books that night, Little Professor, was the local indie bookstore that my mom and I used to visit to have tea and peruse books. I had come home. Me with Maryam from Atlanta, and her drawing of Vincent & Kate on the Pont des Arts

One of the first people through the door was Maryam, an artist and fan of the DIE FOR ME books who occasionally posts her drawings of the book online. She and her family had driven from Atlanta for the event, and she presented me with two of her drawings that I had previously admired online. (Which will promptly be framed and hung in my office when I get back to France! Thank you, Maryam!) 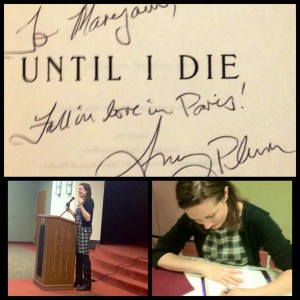 The auditorium quickly filled, with half of the faces being ones that I recognized: high school friends, friends of my parents, and even a couple of girls I used to babysit (who now have babies of their own). My sister counted 57 people in the audience, which was my personal record for a solo event! (Thank you, Birmingham friends!) 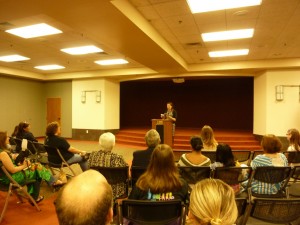 Reading from UNTIL I DIE in the Homewood Public LIbrary

I did my regular introduction, reading, and Q&A, my favorite question being from a teenager who asked, “If a revenant’s limb is severed and can’t be found, will it regenerate while they are dormant?” I dug into my mental Revenant Rulebook and answered it for her (the issue is addressed in Book 2), and went on to the next question. But a few minutes later, I saw the same girl raising her hand, a bit tentatively. I called on her. “What about the head?” she asked. I swear, her questions made my day, and I’m still smiling about them now. (I love my readers!) 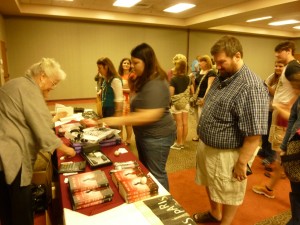 The line for signings. (I'm hidden behind the lady on the left.) Little Professor sold out of the copies of UNTIL I DIE they had brought. Hurray!

Afterwards, I signed for about an hour, chatting with friends both old and new. For weeks, I had been worried that high school friends would show up and I wouldn’t recognize them. Luckily, that only happened with two people, and they both had a good sense of humor, so I was forgiven. After the event, Kim and I headed off to meet Chip and Elizabeth Brantley at a lovely little restaurant called Ollie-Irene. I have been talking to them for the last year about what I can do to help participate in their non-profit, DISCO (Desert Island Supply Co. – a creative writing program that gives students in the Birmingham area more opportunities to write). Chip had graciously organized the library reading for me, and over dinner we talked about books, writing, and the goals and progress they’ve made with DISCO. (I suggest you check them out, especially if you are in the Birmingham area. They are a fantastic organization to consider supporting!) 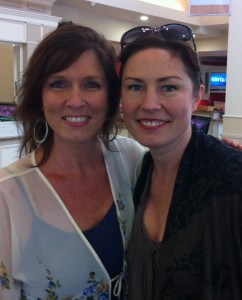 My sister Gretchen and me. (And no, she is not Georgia!)

My sister, Gretchen, had flown up from Orlando for the reading, and we spent the next 2 days with Kim having breakfast, lunch, and dinner with friends. It had been 13 years since I had been to Birmingham, and I had a lot of catching up to do! Besides old family friends (who might not all want their pictures up on my blog), I met my old friend Lou Anders, the editorial director of Pyr Books, who presented me with the anthology of original super hero fiction he recently edited, called MASKED, as well as aspiring writer Lisa Dunick who told me a story idea that knocked my socks off. (Which I hope to read in book-form some day!)

And on a rainy, tropically humid Mother’s Day, Kim and I dropped Gretchen off at the airport and headed to Nashville!