UNTIL I DIE – Paris Book Trailer!

I am SO EXCITED to present to you the book trailer that I shot for UNTIL I DIE on-location in Paris! 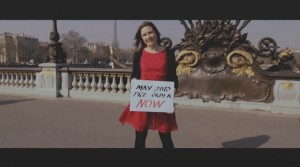 ME! (In the dress my FB followers chose) at the end of the trailer.

Doing the actual shooting were the super-talented twins Nicolas and Amaro from Hype Vandals, while I busied myself grabbing people off the street, showing them my book, and asking them to hold a sign while we filmed them. (Not everyone said “yes”. Some even ran away from me, thinking I was trying to sell them something. I am pretty scary, you know. 😉  )

Very important note: I was able to rope in the Abercrombie models standing outside the store on the Champs Elysees – see if you can spot them!

The goal of the video was to feature Paris, which is just as important a character in the DIE FOR ME trilogy as Kate and Vincent. I tried to get locations you would love, as well as quotes that would remind you of the books.

YOU, the readers voted on the song I used (by Parachute) as well as the dress I wore in the last shot – so thank you all for participating in the making-of! I have posted both the official version and the extended version for your viewing pleasure. ENJOY!!!

< UNTIL I DIE interview with Miss Literati   -    UNTIL I DIE blog tour begins! (Super grand prize.) >

22 Comments to UNTIL I DIE – Paris Book Trailer!