The All-Time Champion of Lying to Children, my grandpa.

I was driving my friend Mags home one day after seeing a film in Tours. After chatting for a few minutes, she said, “So this is the magic car.”

“The magic car?” I responded.

“Yes, Alannah has been telling everyone about your magic car that has windows that go up and down magically if she says, ‘Window Up’ or ‘Window Down'”.

“Oh, that,” I replied, remembering the day I did a mommy-friend favor and took 4-year-old Alannah to the store while Mags, who was pregnant, stayed home and took a nap.

“She said it even worked if she whispered it very quietly,” Mags said, impressed.

I can’t help telling tall tales to children. It’s in my genes. My grandfather, the all time Lying to Children Champion, passed me the gift (or disorder, however you want to see it).

When Grandpa came to visit us in Alabama, my sister’s 2nd grade class was studying his home state of Alaska. Her teacher invited Grandpa to come tell her class about it, and my 3rd grade teacher let me join in.

Grandpa started with a description of the flora and fauna of Alaska, the weather, and what people did there as occupations. Knowing him—king of stories—who had already been caught for lying about our family having Cherokee Indian ancestry—he must have flinched seeing 7-year-olds yawning at his stories. He had to do something to charm them. And fast.

When he finished his very responsible grandfatherly account of life-in-Alaska, the teacher asked if anyone had questions for him. He fielded some about polar bears and snow (this was Alabama, remember, so both were as foreign to the kids as Chicken Vindaloo). And then one of the children piped up and asked, “Have you ever seen the Abominable Snowman?”

A light went on in Grandpa’s eyes. It’s the same light I can feel coming on in mine when a good story begins to brew. Grandpa paused for a minute, looking sideways at the teacher, and then replied, “Actually, yes I have.” He then launched in to a ten-minute cliffhanger of hunting the Snowman to his ice cave in the snowdrifts.

Being a big-game hunter (see photo above of him on African safari, before the time that safaris were of the Kodak-kind), my grandpa probably didn’t have to invent many of the details. The kids ate it up as the teacher progressively freaked out. Being a polite Southern lady she couldn’t really say, “Plug your ears, children. Gretchen’s grandfather is lying.” So she just sat there and turned purple. In my mind, that was the day that Grandpa won the Lying to Children award.

I have no doubt I learned my storytelling from Grandpa. I worshiped him. I idolized him.

Which could be why, when I visited a stone-age dolman with my son and his friend last month, I crouched down and pointed. “See that stone? Underneath there are the bones of a dead person.” 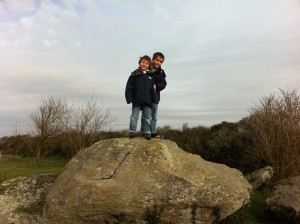 Max and his friend on the dolman, Brittany coast

My ever-practical son asked, “How deep” and I replied, “You’d probably have to dig a bit.” My French friend was laughing her head off, and said, “I can’t believe you told your six-year-old that!”

“I feel he should be aware in case of zombie attack,” I reply with a smile and think…Thank you grandpa. Thank you for your tall tales. And for teaching me that it’s knowing how to build your tale to captivate every possible audience that counts.

2 Comments to Lying to Children