Like Part I, this is from my unpublished memoir, IN THE VINES, and took place around 5 years ago. Enjoy! 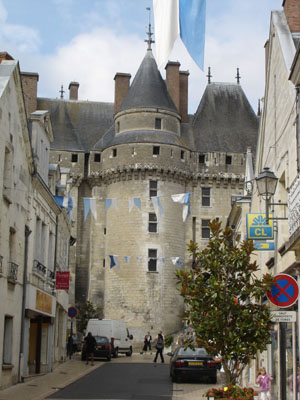 Fabienne called back the next day to confirm that she had secured a negligible raise in my pay. I accepted. Even if she hadn’t succeeded, my answer would have been yes. Having had time to think about it, I concluded that this was the only job I had a chance of getting, bar moving to Paris. At this point, I would have paid them to employ me, as long as it meant getting me out of the house and using my brain once again.

“Stop by next week, and Audrey, our guide manager, will give you some study materials.”

“Thanks, Fabienne,” I replied. “And just to confirm, the position is for English Language Tour Guide, correct?”

“Absolutely,” she said. “Unless we need help in French, of course, but that might not even happen.”

“Right,” I said, and hung up the phone, pushing away a sense of foreboding.

The next week I parked in the château’s employee parking lot and walked confidently up to the front desk. The same greeter who had half ignored me when I inquired about English tours the first time looked up and gave me a huge smile.

“Congratulations! I’ve heard we are going to be colleagues. I’m Martine,” she said.

“Amy,” I responded, and shook her hand.

“Audrey’s waiting for you in her office. Up the stairs to the second floor, and it’s the door on the right.”

I climbed up the ancient spiral staircase as if in a dream. It was straight from a fairy tale castle, built entirely of huge stones with curly cast-iron window bars and a rope handrail. I emerged into a room hung with ancient tapestries and furnished with painted wooden chests. An enormous fireplace took up one wall and cast-iron chandeliers hung from massive ceiling beams. I felt a frisson of wonder as I realized that my own country, America, wasn’t half as old as most of the objects here.

Opening a dwarf-sized wooden door in one corner of the room, I walked into a small office, in which sat a tiny old lady. She could have played the part of the woman at the spinning wheel in Sleeping Beauty, if she hadn’t been dressed in a smart suit and wrapped in an enormous woolen shawl.

“Close the door, dear, you’re letting in the draft,” she said, drawing the shawl tighter around her miniature frame.

“I’m Amy,” I said, walking up to her desk and reaching across to shake her hand as I sat down.

“Ah yes, the American,” she said. “I have some reading materials for you.” She took out a large folder of stapled documents and pushed it across the desk. “You’ll need to return them to me when you’re done. And here are some books,” she said motioning to a large stack of tomes on a side table.

“I’m not quite sure I understand,” I asked. “Do you not have a written-out tour that you want me to use?”

“Well, I have an outline for the tour that I give, and you’re welcome to join in on this morning’s tour if you want to take notes. But each guide writes her own tour.”

“I think that would probably be a good idea,” I responded, wondering how long it would take me to read all of these materials in French and translate the important bits for an English tour.

“Come along, then. There’s one starting in a few minutes,” she said, checking her watch, and we left the tiny office to walk together to the castle’s front entrance.

The next forty-five minutes were pure pleasure. Tagging along behind a group of French tourists, I listened as Audrey spun tales of murderous dukes, land-grabbing kings, and princes marrying duchesses in order to end wars. As we moved from room to room, she pointed out the tapestries and furniture and described how everything was used in the everyday routine of the castle’s inhabitants: both noble and common. I was so enchanted that I forgot to take notes, and when the spell wore off I had a paltry page full of unintelligible doodles.

“I hope you enjoyed it,” Audrey said, as I scooped the mountain of books and papers from her desk on the way out.

“It was wonderful. I hope I’m able to make things half as interesting as you do.”

She laughed. “Well, since you’re starting in June, you have six weeks to learn the material. Feel free to phone or stop by if you have any questions.”

As I walked across the wooden drawbridge and down the stone steps to the street, four and a half centuries fell away like a curtain, and life in the 21st century hit me full in the face, as a group of biking tourists in matching neon shorts-n-shirts cycled by.

For the hundredth time since I had moved to France, I got that feeling: the one where if you had walked up to the me of thirty years ago, a little girl riding her bike under the scorching Alabama sky, and told me I’d be living in France and working in a medieval castle, I would have thought you were insane. 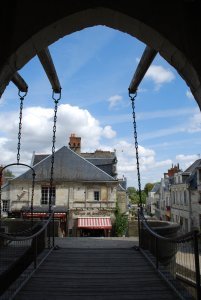 Over the drawbridge and back to reality