Hotel lobby, Portland: 4:45a.m. Actually more like 4:50, because this time I was the one who was 5 minutes late, and when I arrive in the lobby everyone is on their phones trying to reach me. (Eek!) We book it to the airport, and jump on a plane for Salt Lake City, and as I sit down next to my row-mate, she asks me if I’m traveling for business.

I say “yes” and she asks what kind of business. Turns out that she noticed all of us wearing Veronica’s tattoos on our hands (see example below), and just had to know more about it. 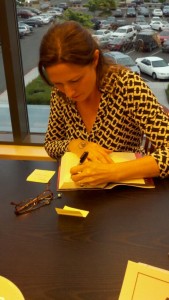 Veronica's "Dauntless" tattoo on my hand (during Portland signing)

Travel tip: if you don’t want random people chatting with you on airplanes at an ungodly hour of the morning, don’t display a mysterious fire tattoo on a noticeable part of your body.

We changed planes in Salt Lake City and landed in Austin around lunch time. Our perky media escort, Kristen J Holland, was waiting for us in a Pucci-style dress and an accent that slingshot me right back to my Birmingham childhood. Not that Texas accents are the same as Alabama’s. But for me, her voice evoked a sweat-beaded glass of ice tea with a sprig of mint in it. I felt at home in Texas as soon as she opened her mouth.

And if the accent weren’t enough of a welcome, in her van she had a cooler filled with sodas, Hershey’s kisses and pretzels. She had magazines about Austin. She pointed out the best restaurants and shops along the way. And as we drove over a long bridge into the center of town, she told us that millions of bats lived under it, and all flew out in a thick noisy bat-cloud every night. You could almost hear five author-brains simultaneously kick into high gear as we began lobbing bat-questions at her.

Turns out we weren’t the only group staying at the Omni. We got there just in time for the Harley Davidson festival, and let me tell you, with motors revving just outside, lunch in hotel lobby was a loud affair. I’ve never seen so much leather, boots, and tied-round-the-forehead bandannas in my life.

I felt smack dab in the spirit of things as I wore my top with black-leather detailing and faux-leather skirt to the signing a couple of hours later. If you don’t already know it, Book People is an AWESOME bookstore, and once again I was sorely tempted to split off from our activities for some browsing time.

Once ushered into the author space, we were welcomed by the bookstore staff, as well as the super-peppy Katie Bartow from Mundie Moms. Katie was the HarperCollins live blogger, and you can see her stories and pictures here.

We followed our now-regular format of Q&A for a huge, enthusiastic crowd, and then the real fun began. I got to meet even more people who I knew from online, like Yara from Once Upon a Twilight, Amy Howard Green and her sister Brittany Howard of the YA Sisterhood (third sister had a very good excuse for not showing, as she was busy giving birth), Terri Zuwala, and Jen Bigheart from I Read Banned Books. (As well as many other amazing people, who I had a blast chatting with as they paused to chat.) 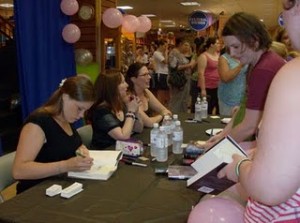 As soon as the last book was signed, Katie grabbed us and she and and Stacey from Girls in the Stacks, filmed a short interview and took some pictures. And then it was back to the hotel, where fellow writer and fellow married-to-a-French-guy Texas native Lori Ann Stevens was waiting me (we have been online pen pals for over a year), at the lobby bar. (Her photos of the signing are here.)

And instead of heading back to their rooms, which you would think everyone would do after such an exhausting day, the other authors all sat around and chatted with us. Katie had come along, and stayed until there was an incident involving excited gesturing and Aprilynne’s Virgin Bloody Mary, which exploded all over the two of them and their bags.

After saying goodbye to Lori Ann (who I hope I will see again in France), I headed up to Tara’s room, which had somehow become the designated after-hours spot. We all ordered room-service dinner, which we ate propped upon every available surface: bed, side table, and desk. And after dinner we stayed until our fatigue amped up the hilarity and everything devolved into the conversation-level of a teenage slumber party. Finally, knowing that we all had morning flights, we dragged ourselves away at 1am.

And the next morning I said goodbye to my Dark Days of Summer group. Three were traveling on to Phoenix, one to Oklahoma, and I was continuing my tour in New York. We hugged and said goodbye like old friends, instead of the strangers we had been just three days ago. And, with utmost sincerity and high hopes for the future, we all said to each other as we left, “I hope we can do this again.”