Another pre-dawn wakeup. Another early morning work-out at the Westin O’Hare hotel gym…this time with a lot of sweaty businessmen. By 8:45 I was piling my luggage into Bill’s van and heading for the airport. My fellow Dark Daysers and I accompanied each other through security checks and hung out chatting until it was time to get onto the plane, where we were all seated separately. Our theory: there must have been former Dark Daysers who actually didn’t enjoy spending every free second with each other and asked not to be seated side-by-side.

Therefore, Aprilynne and I were forced to pass notes back and forth over the seatback about the guy sitting next to her who had what appeared to be a homemade tattoo of brass knuckles on the back of his neck, which was not visible from her perspective (but which I thought she should know about in case he tried to strike up a conversation with her about jail tattoos).

We arrived in Portland to meet our media escort, the elegant Deb Flynn Hanrahan, who was another mom-of-someone-almost-my-age, which meant I stuck to her like Superglue. Got the info on her artistic daughter who lives a few blocks away from my old apartment in Williamsburg, Brooklyn. She took us to a really cool place in Portland for lunch and then on to the hotel, at which point I ditched my suitcase with Aprilynne and ran off to the Portland City Grill where a dozen members of my family had flown and driven long distances from California, Oregon, Idaho and Washington to meet me. 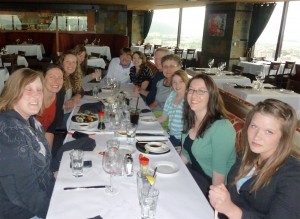 Aunt, uncle and lots of cousins

Our get-togethers are rare and I really really love these people, so I stayed as long as I could, and then ran back to the hotel to get ready for the Main Event: the Dark Days signing at Barnes and Noble, Clackamas Town Center Mall. However, we almost didn’t make it into the bookstore, since Aprilynne spotted an Anthropologie just a couple of shops down and had to be forcibly steered away.

We were led to a meeting room, and introduced to the effervescent Sara Gundell (who was rocking an amazing dress). Her site, Novel Novice, was serving as HarperTeen’s official blog partner, and we spent a few minutes shooting a video interview with her. 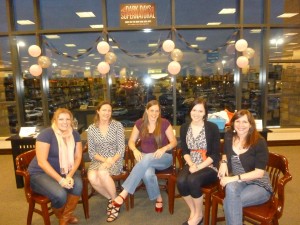 Here we are, pre-signing, being interviewed by Novel Novice

And then we walked into the main room and saw a huge group assembled there waiting for…us! I had a serious heart-in-throat moment, so it was a good thing that Deb was there to lead us to the table and show us where to sit. 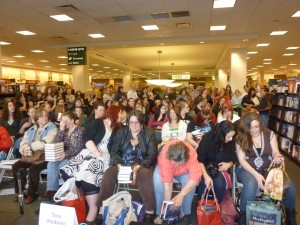 We followed the same “introduce ourselves, then Q&A” format, which was live-Tweeted by Sara (front row, red hair, rockin’ B&W dress). She took some great action shots, which you can see here. (How exactly she managed to Tweet and photograph at once is a mystery to me. I suspect that she types with her toes.)

And then came the signing, and let me tell you – it was AMAZING. I met so many people who I knew online, including Kristina, Melania, Jennifer, Vy, Candace, Angel Morgan, Nancy. (Click on their names to see their own photos and accounts of the event.) And then Suzanne Young, whose own book, A NEED SO BEAUTIFUL, was just published yesterday by HarperTeen, stopped by and introduced herself. Annie Jhun, a girl I used to work with in New York, walked up with her boyfriend, totally surprising me. And then my family all came up and hugged me and took pictures. 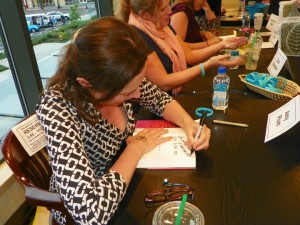 Signing next to Tara. (Photo by cousin Melissa.)

As you can see in the picture, we all had stuff we gave away. I had sea-salt chocolate that I had brought from France, Tara had the blue bracelets you see, and Aprilynne and Veronica had temporary tattoos. I signed two Nooks and a Kindle. Someone gave me a beaded bookmark she had made. People talked to me about their own writing aspirations. It was AWESOME!

Finally, after the last book was signed, we returned to the hotel and had dinner in the restaurant before heading to bed early. Because the meeting time the next morning was (gulp) 4:45a.m.!