I slept well, knowing that I would receive a wakeup call at 8am the next morning, and awoke to…darkness. My brain, still running on French time, had decided to give me a 5am wakeup call. I spent the next hour answering emails, and at 6a.m. ordered breakfast from room service. 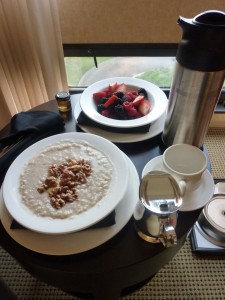 Ate it. Answered more emails. Looked at my clock. 7a.m. My nervous energy was reaching blow-a-fuse level by this point, so I pulled on my workout gear, went down to the hotel gym, and climbed a huge, 1-hour-high virtual mountain on the video screen of the elliptical trainer, which is pretty much unprecedented for unathletic me. But every time I thought about a group of people staring at me, I got a new burst of nervous energy, and climbed a few hundred feet more.

Because here’s a secret. I have major stage-fright. As a manager at Sotheby’s, I got woozy giving team meetings for fifteen people. As organizer of my Brooklyn neighborhood’s political Meetup, my voice would shake just reading the meeting agenda. My first week as tour guide at a medieval chateau in France, I thought my head was going to explode each time I faced a new group and said, “Welcome to Langeais Castle.” And yes – I taught English at French universities for three years. But I had a stomachache every single day as I stepped into the classroom to face my 40-odd students.

So the thought of getting up in front of people who had read my book…some of whom had traveled long distances just to see me and the other authors…FREAKED ME OUT.

I wore myself out as much as possible on the mountain climbing, and then went back to my room and began getting ready. At 11:15am I made my way to the hotel lobby. The first person I saw was Ellen Schreiber, who I immediately recognized from the author photos on her VAMPIRE KISSES books. She wore a purple top, blue jeans, and a ton of cool vampire-themed jewelry, and stood there coolly waiting as if she had done this hundreds of times. Which, I realized, she probably had, having been a published author for over a decade.

Tara was already there, the smile on her face as big as Oklahoma: it was HEREAFTER’s release date. Her book birthday! And we got to spend it with her.

Veronica Roth walked up and everyone introduced themselves. She had come the shortest distance, since she lives in a Chicago suburb, so she looked fresh and ready for the day. Aprilynne soon joined us, and we were all led by our media escort, Bill Young, to a big van waiting outside.

We drove a short way to our first stop: the Chicago Public Library, Rudy Lozano Branch, where we were scheduled to meet with a high school group. Aprilynne and I made a quick visit to the restroom, where I joined her at the mirror and tried to ignore her as she did something weird to her neck.

At first I thought she was attaching some kind of asthma patch or another medical thingamajig, and averted my eyes. I later saw that it was a fake tattoo in the form of a necklace (the one that Tamani gives Laurel), and she probably just thought I was a total weirdo for not saying, “Hey whatcha doing?” instead of running off to give her privacy.

The night before, Aprilynne had offered to organize everyone, and I was more than happy to obey her instructions on where to sit and what to do. She arranged the microphones so that everyone could reach one, and told the librarian-in-charge exactly what we’d be doing, down to the minute. 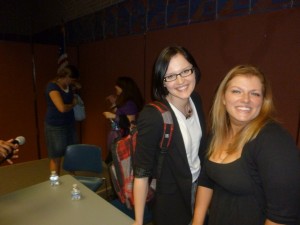 As the group from Juarez, Benito Community Academy High School filed in, we took our places behind the table. And for the next hour the students asked us questions and sat quietly and politely, listening to our answers. I almost fainted, but not from nerves. I just couldn’t believe that a group of teenagers could be that well-behaved, after suffering three years of university students who talked, played cards, and made out during my classes. I wanted to get up and hug each and every one of them. But instead, I followed the others to sit behind another table and sign books for the students. I didn’t quite understand the rules, but it seemed like each of them got a free book, and those who had a special sticker under their chair got first pick. 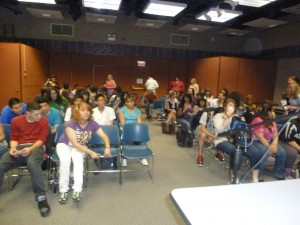 After that, Bill asked us if we wanted to go hang out somewhere or return to the hotel for a couple of hours. It being 106 degrees outside (as measured by the car thermometer), we all opted for the hotel and headed to the restaurant for a late lunch.

Conversation was still at the getting-to-know-each other level: cautious but convivial, putting feelers out to see who these people—who we knew mainly through their books, websites and Tweets—truly were in real life. I was starting to suspect that everyone was actually as fun and cool as they seemed on the internet. And it didn’t take long to discover that my instincts had been correct. [Day 2 to be continued…]