Recuperated from my France-to-Chicago flight at the beach with my best friend Kim and her family. At the end of the day, the taxi I ordered to take me to the Dark Days Tour hotel couldn’t find me because apparently Lake Michigan is not a valid address. Listened to very amusing conversation between Kim and taxi booker that went like this:

“We’re on Isabella and Lake Michigan. What do you mean Lake Michigan isn’t in your GPS? It’s the huge body of water right next to the city! It’s the biggest monument in Chicago!!! How can your driver not find Lake Michigan?” 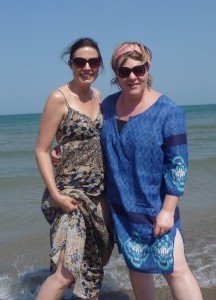 Once the driver found me—a half hour later—we sat in rush-hour traffic for another half-hour, and I got to the hotel with fifteen minutes to wash the sand out of my hair and get dressed for dinner. When faced with this type of situation, some people stay cool and collected and go about their business in a reasonable manner. I, however, am not “some people” and instead opted for tearing every item of clothing out of my suitcase and strewing it across the room in my attempt to find something to wear, speed-showering, and getting down to the lobby 10 minutes late with wet hair.

And there, waiting for me all curled up in a chair, typing into her cell phone and looking like nothing in the world could phase her, was Aprilynne Pike. Tara Hudson met us a few minutes later, and we proceeded into the hotel’s restaurant—Aprilynne’s pick since she had been there the year before.

Meeting the other authors felt like the first day of school. And having Aprilynne invite me to a pre-tour dinner was like having the head cheerleader ask me to sit at her table in the lunchroom. I kept looking around, waiting for someone to come up and tell me I needed to move to the geek table. But instead, Aprilynne did everything she could to make me and Tara, the two newbies, feel comfortable.

She answered all of my questions on, “So what exactly are we supposed to be doing on tour?” which then morphed into general questions about Writing and the Writing Life. And I kept waiting for her to roll her eyes at the inane questions or say, “Really, that’s enough of an interrogation for one night,” but she never did. Not only was she indefatigably gracious, but seemed to enjoy being the Bestower of Knowledge, telling us that another veteran writer had filled that role for her a couple of years before.

Tara was exactly how I thought she’d be. Smiley. Down-to-earth. Super-friendly in that gracious southern way that I know so well from growing up in Alabama. And let me tell you, she and Aprilynne had some great stories to tell. Storytellers are my favorite kind of people, so I felt totally spoiled kicking off the tour in their company.

Finally, after three hours of chatting, the pure adrenaline I had been running on began to dwindle. Although it was only 10pm in Chicago, it was 5am in France, and I was starting to nod off. We left the restaurant for our rooms, and with an equal mix of nerves and fatigue, I fell asleep.

[Unfortunately there are no photos from the 1st night dinner, since I was still trying not to be a complete geek. Luckily, I gave up the next day and embraced my camera nerdhood. As you will see in tomorrow’s post!]