Why Trade in the Big Apple for the Big Baguette?

Five and a half years ago, when we told our friends and family that we were moving from New York back to France, the reply was inevitably, “Oh, to Paris”? When we answered, “No, to the French countryside”, the responses ranged from “That sounds idyllic” to “Are you kidding? You will go absolutely insane living in the countryside”. Bets were placed on how long I could make it without a rural-induced mental breakdown and subsequent return to city life.

We had several reasons for moving to the countryside.

In New York, everyone we knew who had lived there for several years bought or rented a house or flat outside of the city, if only during the summer months. It is commonly acknowledged that one must escape the city from time to time in order to ward off being involuntarily committed to a padded cell at Bellevue. A few friends had even made the leap and moved to the countryside, keeping their jobs in the city. We had been in New York for eight years, and the creeping malaise of city life had infected us. We were renting houses in the woods or escaping to the beach every time we had a couple of days off.

Secondly, I have lived my entire adult life in cities: Chicago, Paris, London, New York. And after a while, I began to get the overwhelming urge to plunge my hands into soil. I actually dreamed about dirt. So as soon as we moved into our top-floor Brooklyn apartment which had (illegal) roof access (via fire escape), I bought a half-whiskey barrel and some planters and started a roof garden. I ran a hose from my kitchen sink through the window and up the side of the building to water my tomatoes, basil and radishes (which grew beautifully), melons (which never grew) and corn (which birds ate before I could). The next, and last, apartment we had in Brooklyn had a dangerously sloped roof. I tossed my planters and hose and my dirt-fetish returned with a vengeance. 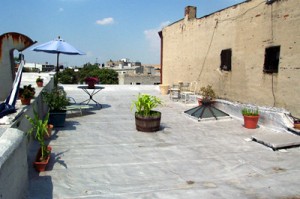 There was also the property-ownership angle. The price of a studio apartment in Manhattan would buy us a big house in the French countryside, with enough room for a washing machine and dishwasher, both normally inaccessible to New York renters.

And then there’s the fact that we have an 80-pound dog who likes to run.

Once we had decided to make the move, other factors sealed the deal for us. We discovered that Child #1 was on his way, and felt that proximity to his grandparents in France, who were gagging for grandchildren, was a positive thing. (And who laughs in the face of free babysitting?)

We already had in mind the perfect destination: my father-in-law’s little town in the Loire Valley. And that’s how we made our decision to swap the asphalt avenues of New York City for the dirt roads of Montreuil-les-Vignes.*

So how did it work out? Well, for the first few months I loved it here, then the next couple of years I hated it.

I was lonely. I didn’t know how to do the Mom thing without a support network, so felt pretty lost most of the time. And I missed the culture-on-tap and around-the-clock-shopping-and-eating-out of big cities.

But the last couple of years have been better. I’ve gotten used to the isolation and have adapted to the fact that I have to communicate with my friends online instead of face-to-face. I’m involved in our tiny community, volunteering at my kids’ preschool – teaching them songs in English. And I have my own office, across the yard from my house, where I can go when I need to think and create.

However, I do not have Starbucks. Or nights out with my friends, like I did in my previous lives. But, Paris is just three hours away and when I feel the deprivation starting to hit, I pack up a bag for a couple of days and run away. 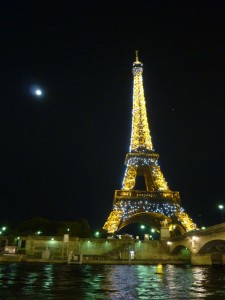 Oh, how I love Paris!

* Don’t bother looking Montreuil-les-Vignes up on the map. It doesn’t actually exist. It’s my fake name for our town of (gulp) 1300 people!

3 Comments to Why Trade in the Big Apple for the Big Baguette?