To answer a few of your questions about DREAMFALL:

Give me 5 reasons I should read DREAMFALL.

Why did you want to write horror?

I actually tried to write a horror novel as my very first attempt at fiction. But I got halfway into it, and then didn’t know what happened next. So I put it aside and wrote the DIE FOR ME and AFTER THE END series. Once I was ready for my next challenge, I thought I would try horror once again. And this time, the story stuck.

In the DIE FOR ME series, I discovered that I enjoyed  much preferred writing the fight scenes as much as I did the kissing scenes. Chopping someone’s head off with a sword was just as exhilarating as writing a steamy makeout scene. So with DREAMFALL, I decided to embrace my morbid side and go with it. And, boy, did I have fun. At one point, my editor asked if one scene wasn’t TOO gruesome. I begged for it to stay, my argument being, “This is horror – it’s SUPPOSED to be gruesome!” I mean, if you’re writing horror, you might as well go all the way. So it stayed, much to my twisted delight. Funnily enough, the concept for the novel came from an idea I had for a children’s picture book. I’m still scratching my head as to why my agent was horrified when she read the pitch. (Hmm…)

How much research did you have to do for DREAMFALL?

DIE FOR ME was about things I knew: Paris, history, art, love and loss. AFTER THE END also contained things I knew…but on a more personal basis: I grew up in a type of cult-like environment where, like the main character Juneau, brainwashing was an aspect of my childhood. The research for this book was mainly with the locations. For example, once I had written the first draft, I flew to Seattle to do a road trip to Arizona so that I could describe the landscapes.

But DREAMFALL required major research. As the idea for the story evolved, it included more and more science. I was determined to get the facts right so that the fiction I added would be more believable. I read an entire book on the little-known disease called FFI (Fatal Familial Insomnia). I studied sleep cycles, read about sleep research, interviewed two people with narcolepsy, and one person who had gone through electroconvulsive therapy, and asked a doctor friend to read through all the medical sections, so I could be sure those were right.

But, like with my previous two series, there were some aspects of DREAMFALL that I didn’t need to read up on because they came straight from my own life. I know insomnia well. Whenever something horrible happens (like my mother’s death), my brain responds by giving me a good dose of insomnia. It was easy for me to channel the feeling of not being able to sleep.

Which character do you feel closest to in DREAMFALL?

There is no character in my books that I have felt closer to than Cata, one of DREAMFALL’s main characters. When I started the book, I hadn’t planned to model her back story on my own past. But as her personality formed, I found myself dipping into my memory for anecdotes. It made sense: we both suffered PTSD from abusive childhoods.

Cata’s first nightmare in the book comes straight from my 16-year-old brain. I lived in the crazy run-down antebellum mansion she lived in. And my father was the same type of monster hers was.  As her story progressed, I let myself pepper it with actual words and events from my childhood.

However, in DREAMFALL, I let Cata escape. She told someone what was happening to her, and was removed from her family by Child Protective Services. In real life, I stayed and bore the brunt of my father’s mental problems.

In the end, Cata provided a sort of redemption for me. In writing her story, I was able to allow my adolescent self to speak up for the first time.

I wonder if you’ll see an aspect of yourself in any of the characters. Over the course of this duology, I have come to love them. Because they are not who they seem to be. Just like a nightmare…you only truly understand it after it’s over. Although the truth is there, right before your eyes, you have to wake up to realize what was really going on. 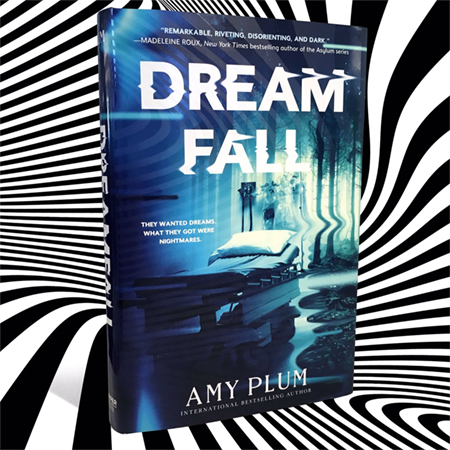