This is Part 6 of my adventures exploring the off-limit catacombs under Paris. Here are Part 1, Part 2, Part 3, Part 4 and Part 5.

When I first moved to France, in 1991, I read the book “Is Paris Burning?” and ever since have been obsessed with the idea of Occupied Paris. It’s hard to imagine that such atrocities happened in this beautiful, seemingly peaceful city. I can’t walk down the cobblestoned street of rue des Rosiers without thinking of the Nazi torture chambers that were located beneath. And I don’t even like to go near rue Nélaton, where the Velodrome d’Hiver once stood.

I sometimes look at my neighbors, wondering which one would have betrayed the people they shared a courtyard with…took the trash out with…traded pleasantries with while checking the communal mailboxes. Maybe my faith in the general goodness of humanity is misdirected and naive. But, to me, that kind of evil…here, right here!…just doesn’t seem possible. 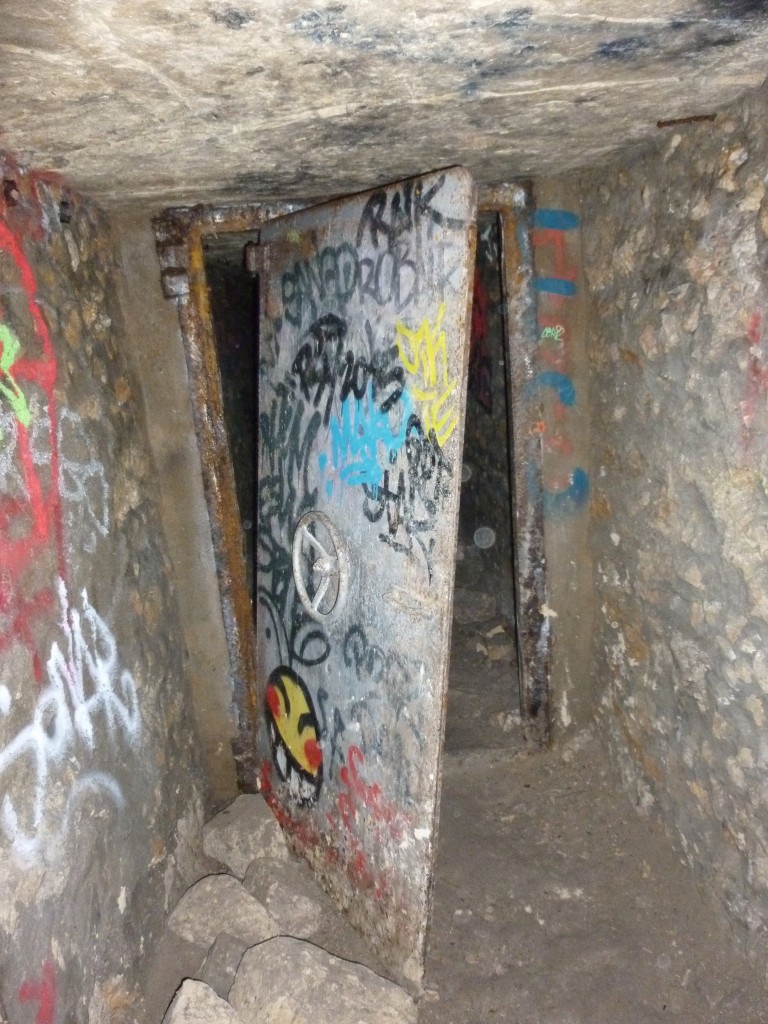 Evidence of the occupation is also visible beneath the streets of Paris. Gilles told me that soon after WWI, the French realized Germany wanted vengeance. Only a few years after the armistice was signed—as early as 1923—thousands of shelters began to be prepared throughout Paris to protect the population against bomb and gas attacks. 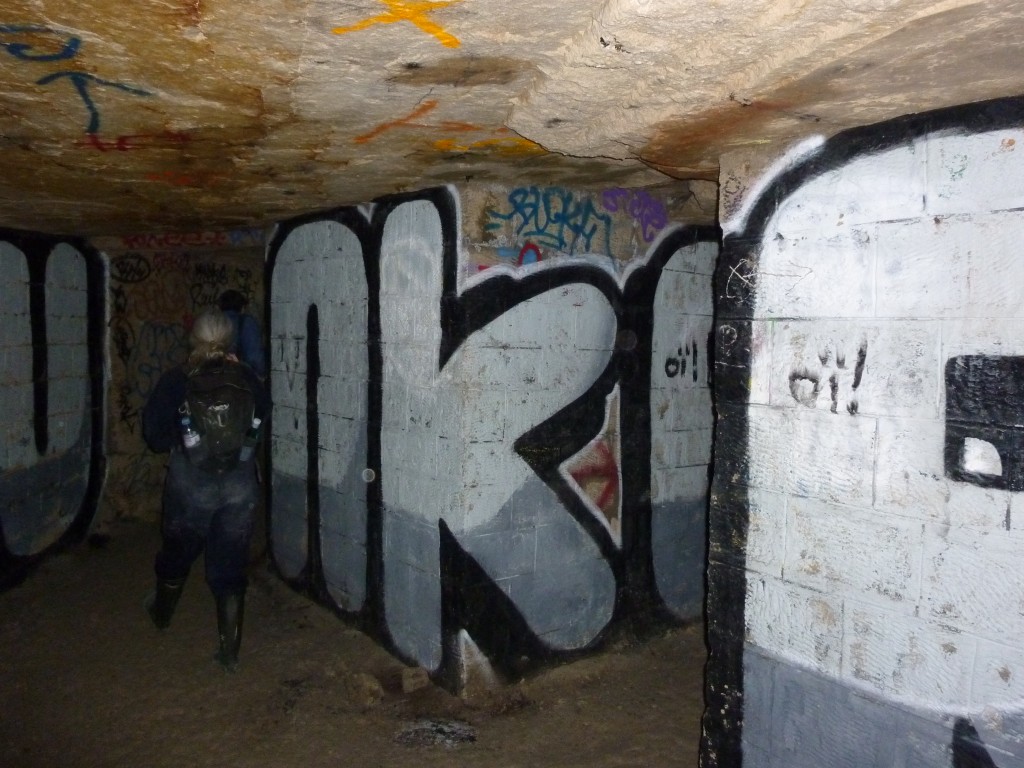 Graffiti letters spelling “BUNKER” were my only clue that we were entering the Luftwaffe headquarters.

Three of those shelters still exist in the catacombs, one of which is the bomb-proof bunker beneath the Montaigne high school, requisitioned in WWII by the German Luftwaffe as their command post. The Nazis marked the whole area of the catacombs near their bunker with three colors of arrows painted atop white backgrounds, the key being… 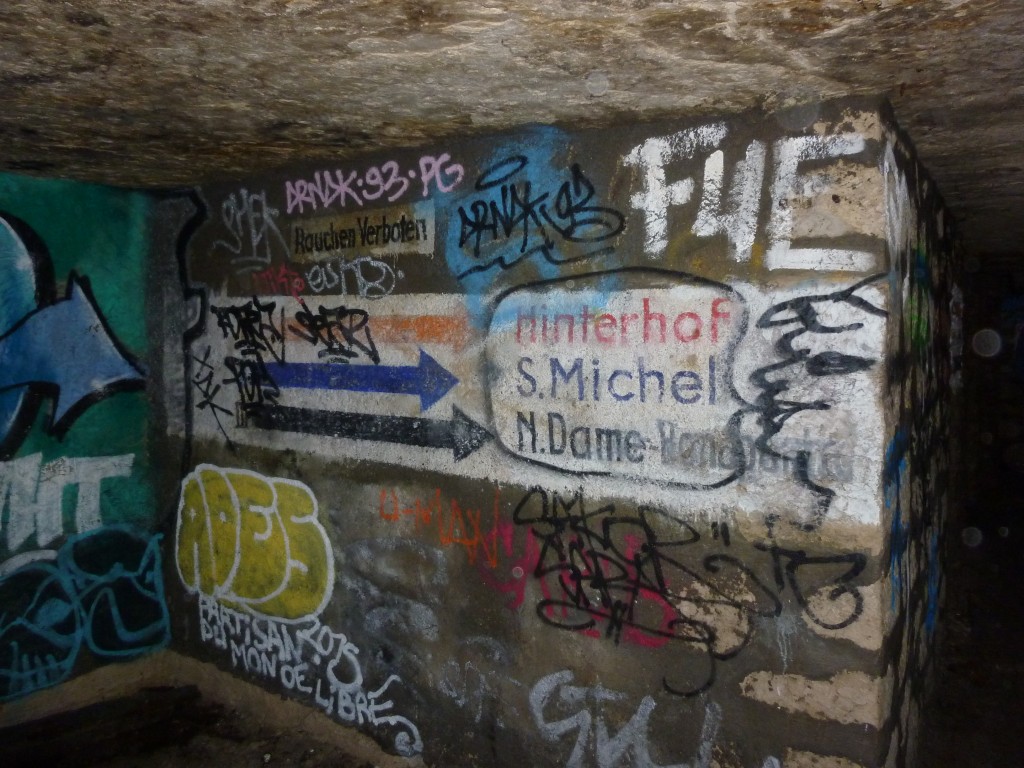 Directions next to the Nazi bunker. “Hinterhof” means “back yard”, in this case the back yard of the Montaigne high school directly above-ground, Blvd St. Michel, and 2 emergency exits: rue Notre Dame des Champs and rue Bonaparte. 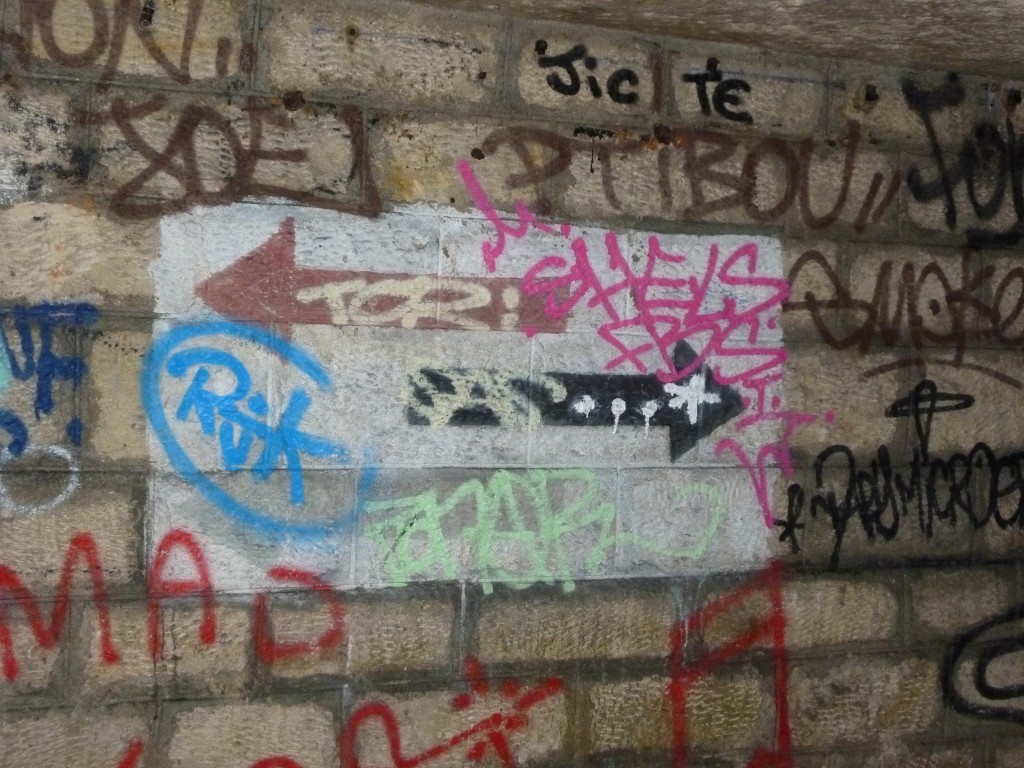 The arrows have been meticulously placed, and traces of gates or doors can be found blocking alternate corridors so that no one could go wandering off—either purposefully or by accident. (Like the two Nazis who wandered off, clearly out of the bunker area, in Part 2.) 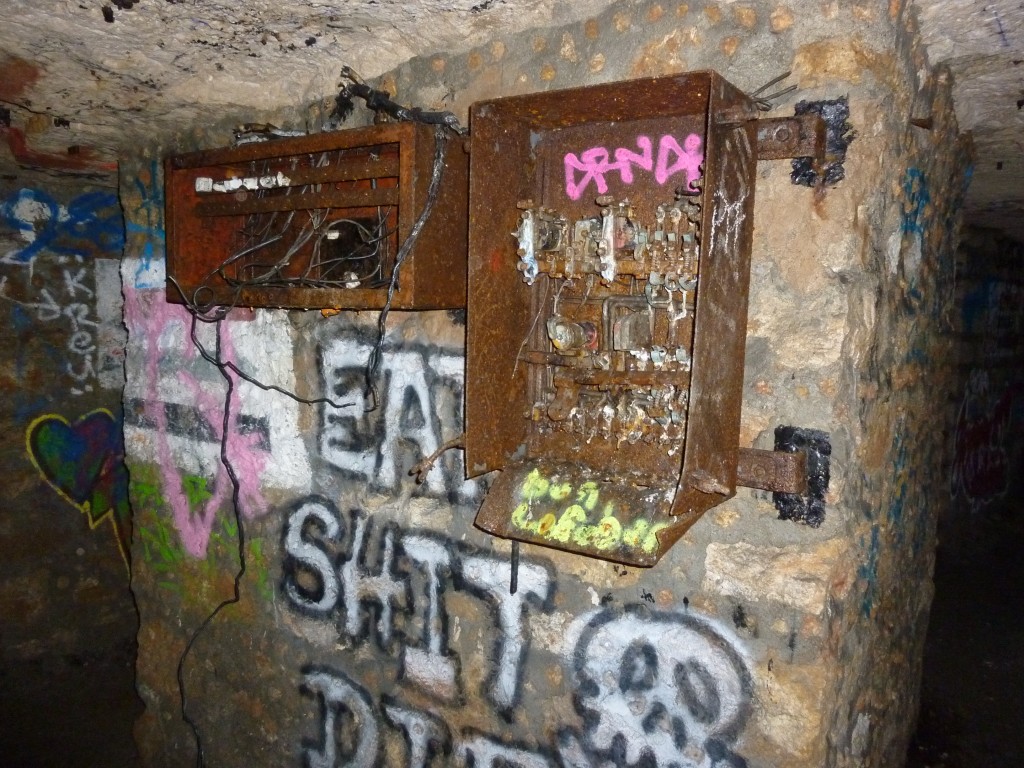 The electrical and communication boxes of the underground Luftwaffe bunker. 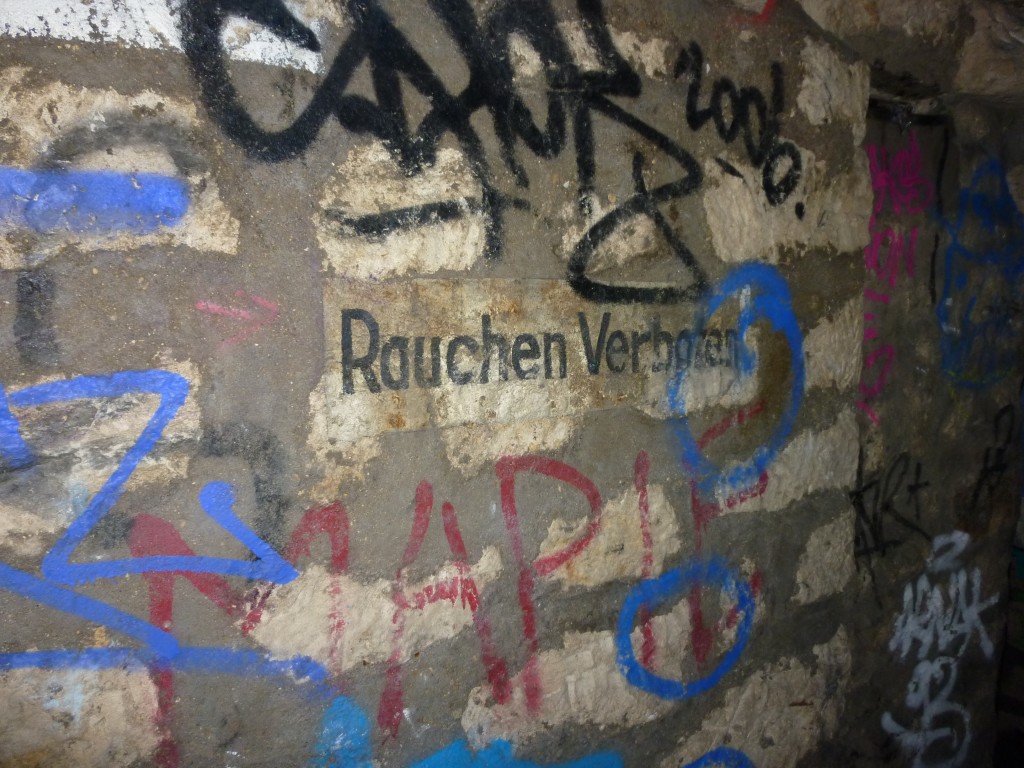 Amid the floor-to-ceiling graffiti that dates from the last few decades, a few clues remain as to what this part of the catacombs was like during the German occupation. 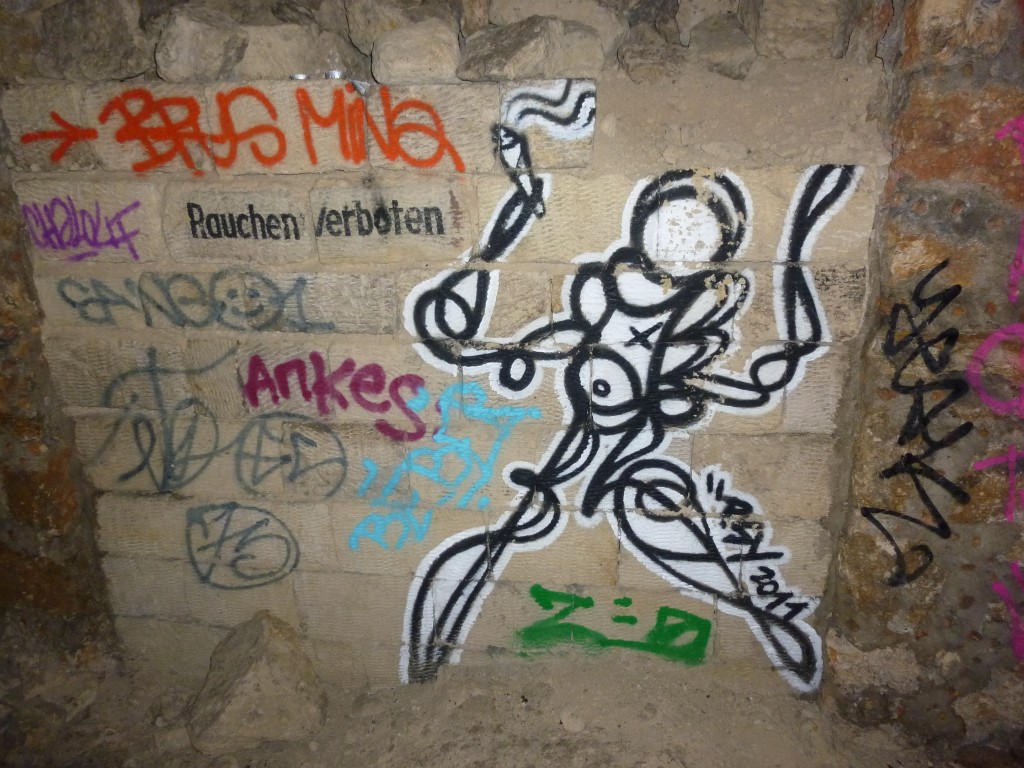 Signs saying “Smoking Forbidden” and “Quiet” are stenciled in German on all of the walls. 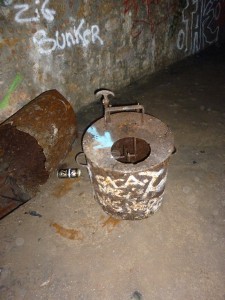 The chemical toilet still stands in the bunker area, a reminder that the catacombs lie several levels beneath Paris’s sewer system. 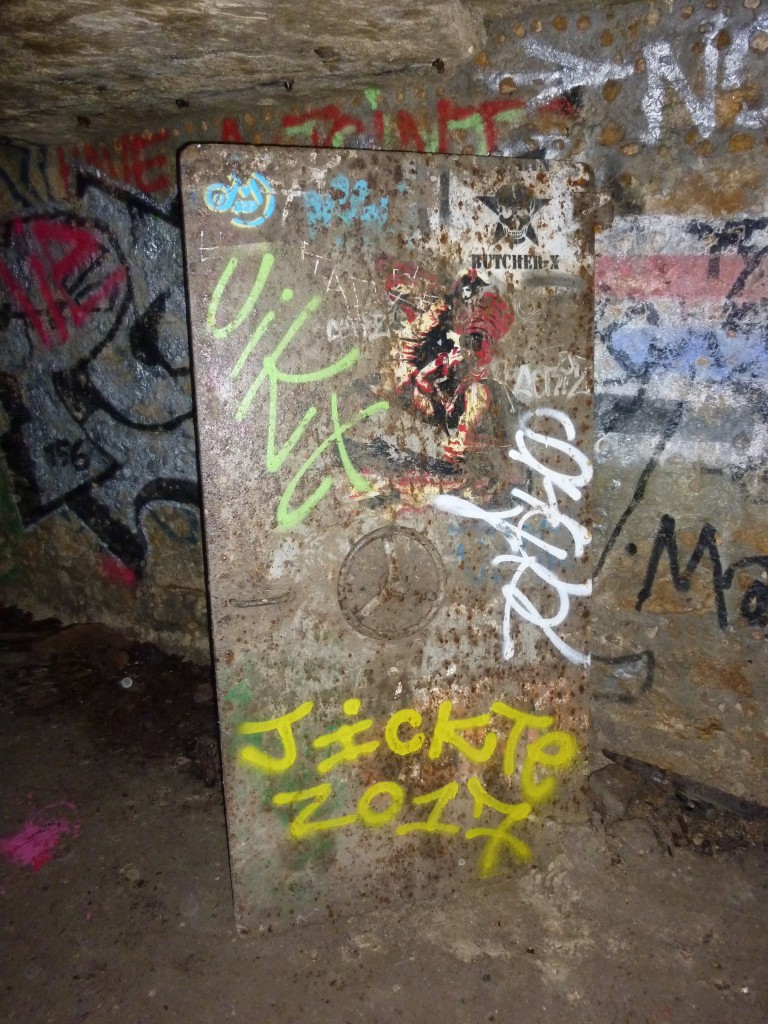 Reinforced metal doors with locking wheels (I’m sure there’s a term for this) are propped around the area. 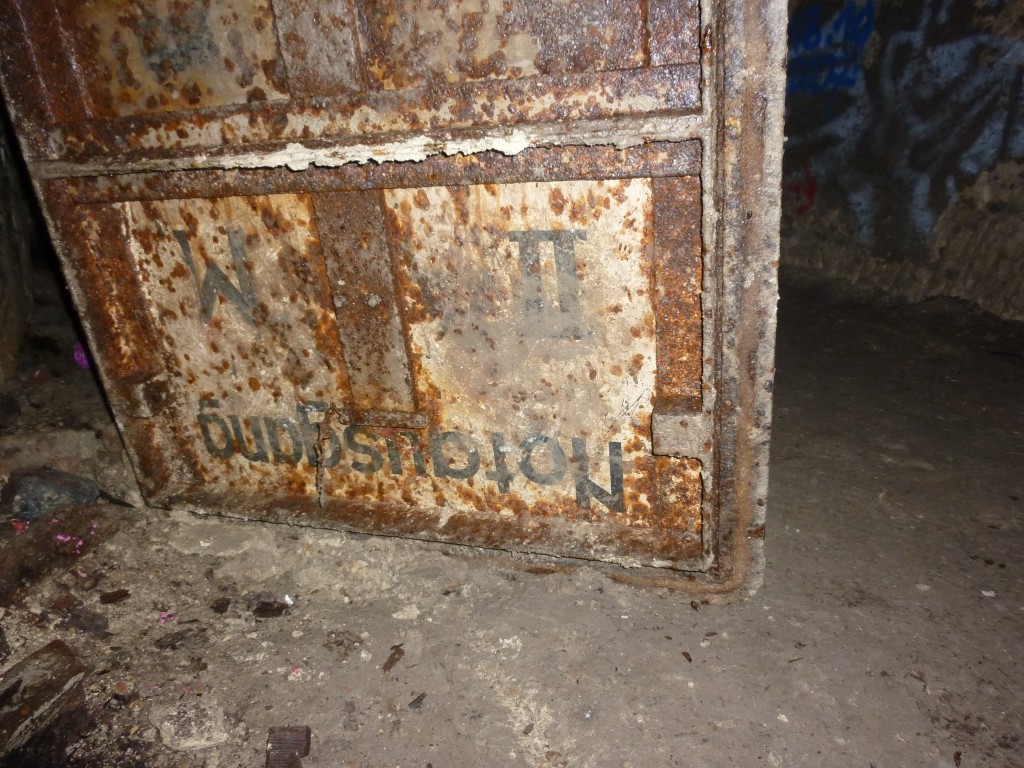 This door, which has been dumped unceremoniously upside down, still has the German word for “Emergency Exit” painted on one side.

Although I expected to see some original graffiti from the time of the Nazi occupation, Gilles told me that very few German inscriptions remain. Apparently the Nazi commanders ordered their underlings not to write on the walls. And, as history tells us, the Nazi soldiers were known to obey orders.

Although I’ve given you the highlights, I haven’t come near to showing you everything I experienced in the catacombs.

From the wells that are found throughout—some dried up, and others full of crystalline  water… 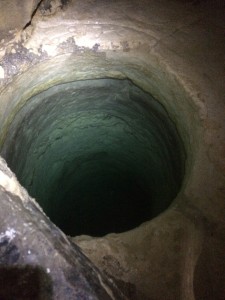 to the wax-looking deposits on a few of the walls, producing cave-like stalactites… 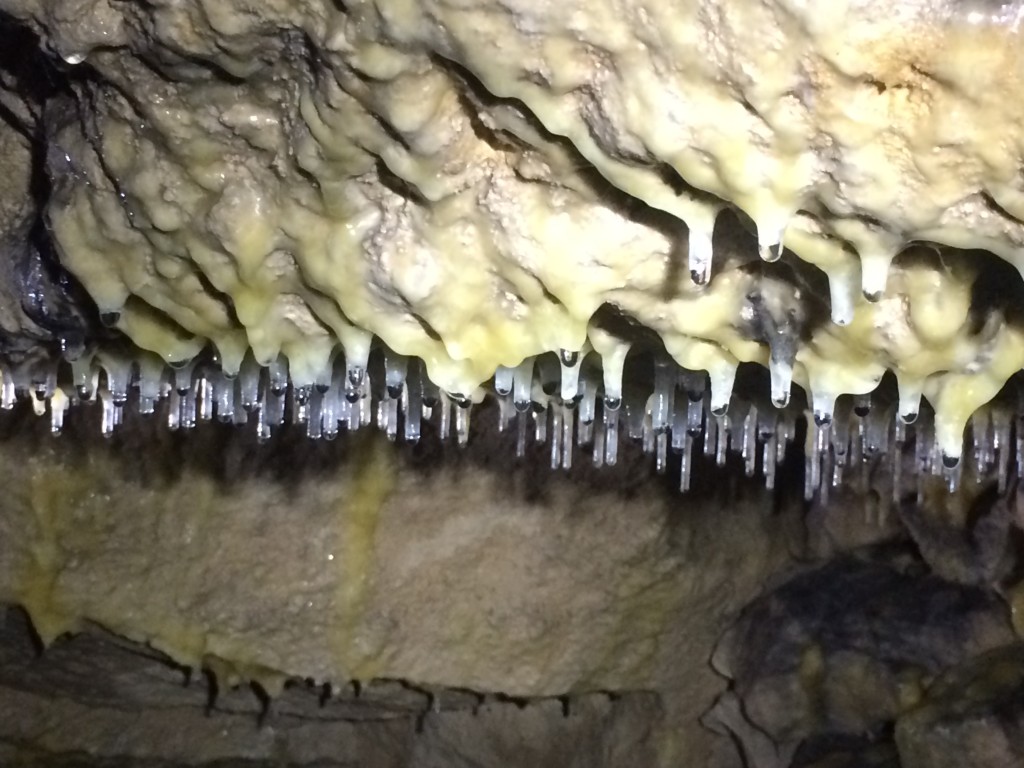 to the absolute silence while you sit, waiting beneath a manhole cover…until someone steps on it 70 feet above and the sound reverberates through the tunnel… 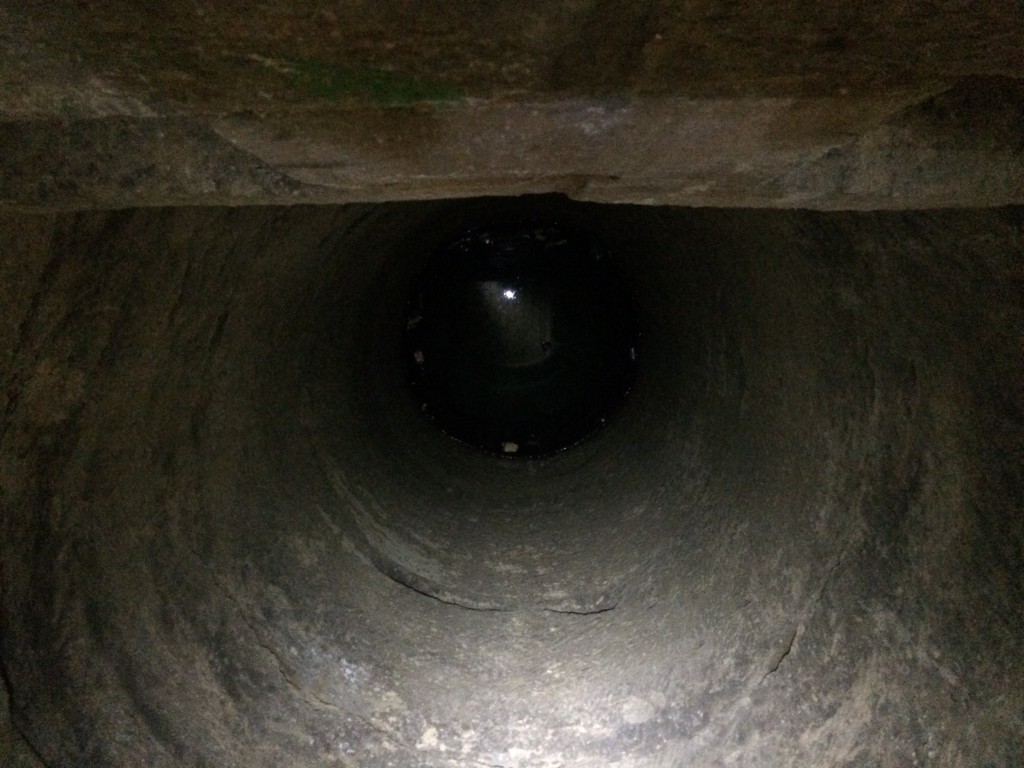 Looking up at the speck of light from the hole in the center of a manhole cover.

to the fossils and even a few extant shells made visible when the limestone blocks in the ceiling crumble away, there is so much more to tell. So much more to show. After fulfilling my longstanding wish to visit the off-limit catacombs of Paris, I finally understand some of the mystery and even fear that surrounds them. The miasma of discomfort that their image brings to most people. While there was no talk of ghosts or spirits while we roamed the subterranean tunnels, something definitely exists down there in the darkness.

Because when you leave, you do not leave whole. For three hundred years, the catacombs have claimed something from each and every visitor. Like they did with those before you, they take a piece of your mind. Of your heart. Of your spirit, if you believe in such things. And that piece will never be yours again.

It is waiting for you—with all of the others—calling you back to return deep below the streets of Paris. 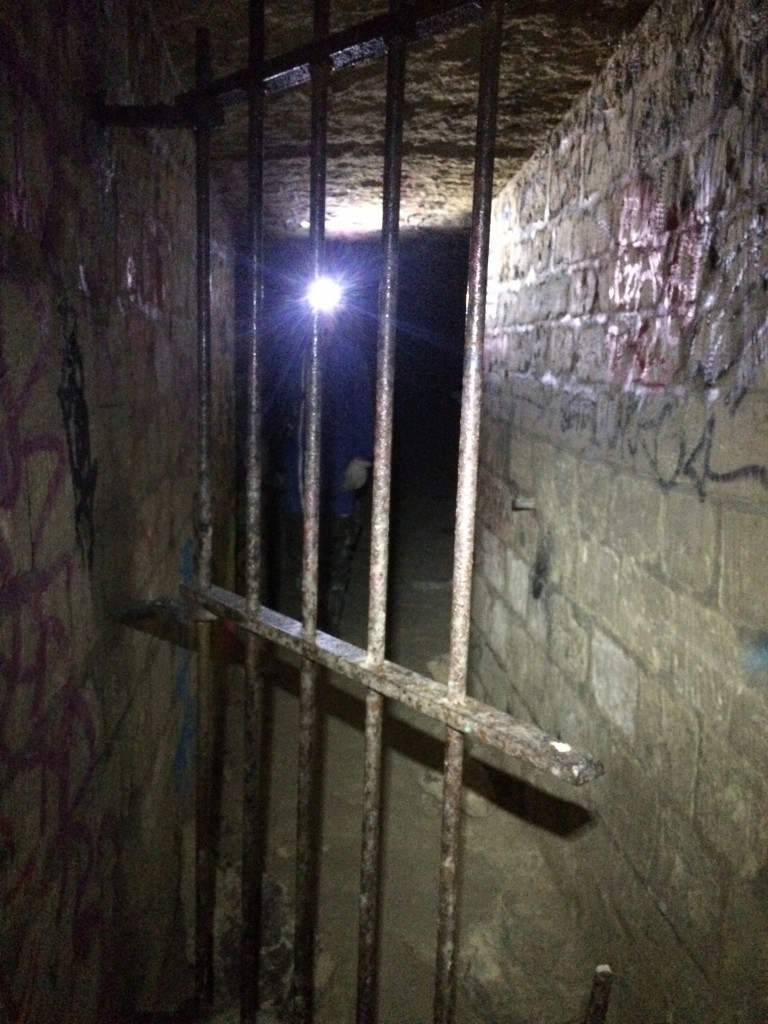 [For those of you wanting to know more about the traces of German inscriptions that still exist from Occupied Paris, order Gilles’s book that comes out March 2017: Abris Souterrains de Paris. (Underground Shelters of Paris.)  Photo below:]