Welcome back for Part 2 of my catacombs adventures. Here is Part 1.

Once we passed through the tiny hole that gave us access to the catacombs, we were able to move standing up for a while. Most of the passages are like this: 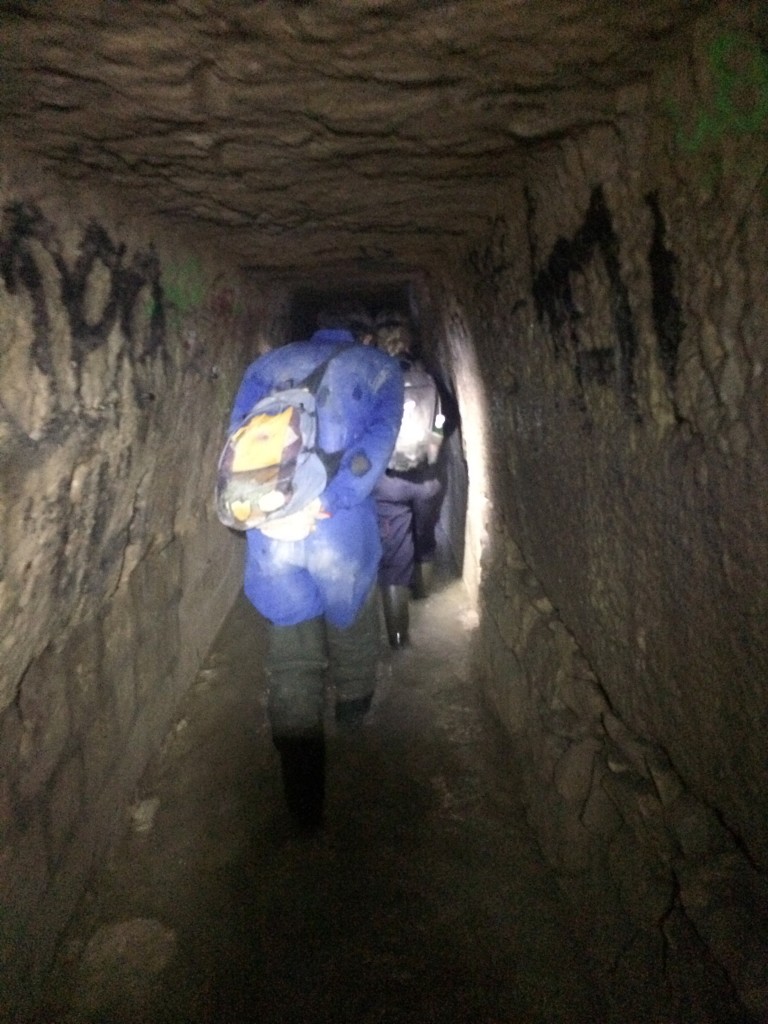 …wide enough to walk through, but not to stretch your arms out straight. I was slightly stooping most of the time. And about 1/4 of the passages we went through had lower ceilings, so that you are actually folded over double while you are walking/scrambling.

Let me pause here to tell you just what these tunnels are. Before Paris even existed as the city is now, there were many mines on the outskirts…mainly for the limestone used to build the buildings you see in Paris today. At the time, that land was farmland, so no one thought about security. But as Paris grew, homes were built on top of land that had been hollowed out, and the more buildings perched atop these holes, the more dangerous it was.

So what was before a collection of individual mines were all connected now…thus creating the network of catacombs we have today. (I am simplifying greatly, but you get the idea.)

Back to the tour. As we made our way through the tunnels, Gilles pointed out Guillaumot & Co’s handiwork, especially the system of labeling that he had established. Markers were drawn on the walls in pencil/charcoal and afterward, stone-carvers (the same guys who carved tombstones) came through and carved what they saw in pencil permanently into the wall. (Because of the humidity, most pencil marks are still visible.)

Here is one example: 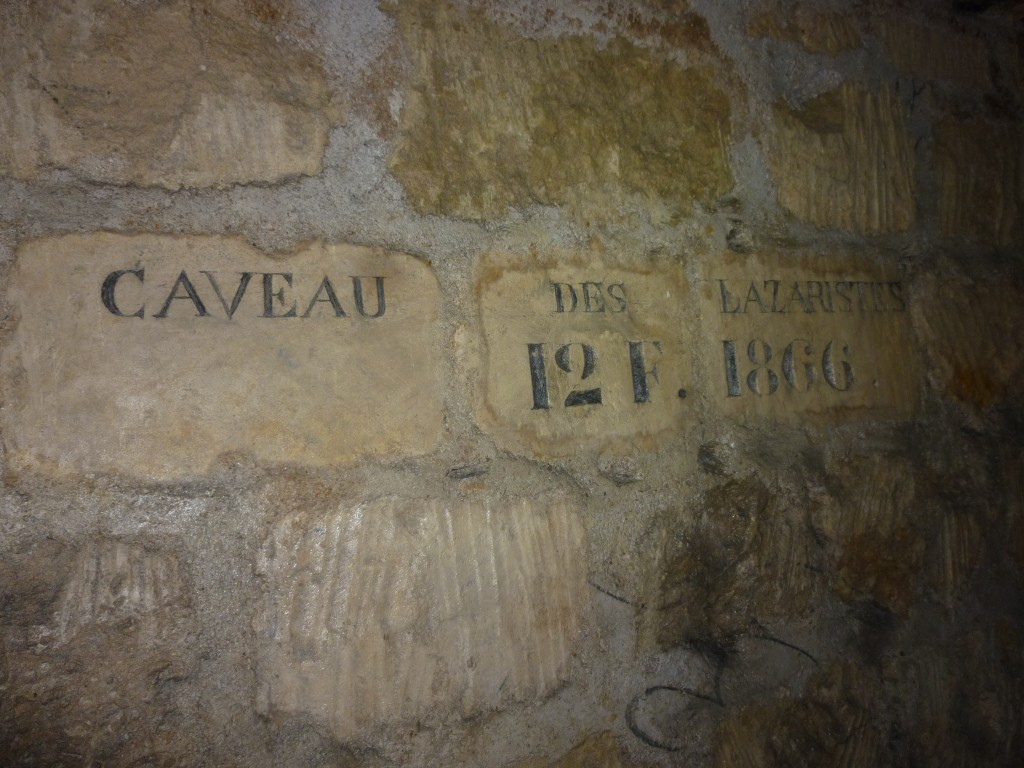 Beneath the inscription “Graves of the Lazarists” is 12 (the marker indicating which reinforcement or pillar) F. (the initial of the IGC inspector currently in charge) and the date it was inspected (in this case 1866).

Most of the markers in the catacombs follow this formula, except when the stone carver got confused like here: 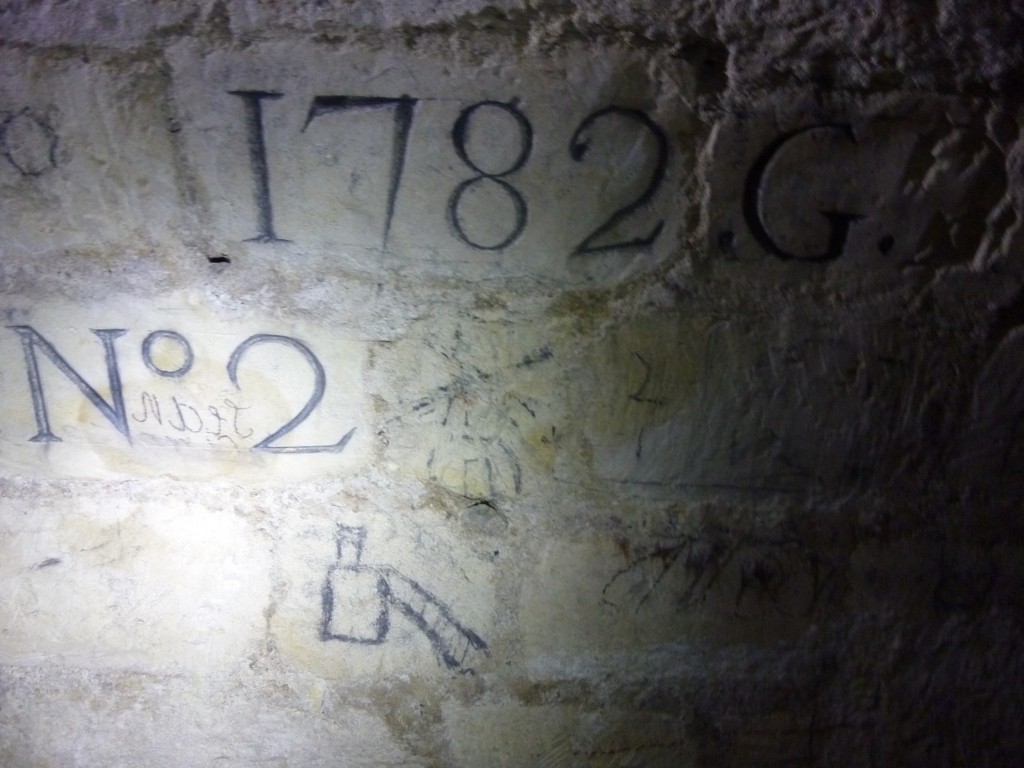 and put the date first, the initial, and the 2 after, then scratched out the 2 and kind of shoved it below and in front. (And for those of you who can guess what the tiny drawing is beneath the numbers, it dates from the same year, and there will be more on that topic later.)

Besides the IGC markings all over the place, there are other official markings: street names and, in a small percentage of tunnels, the numbers of the houses or names of important buildings directly overhead.

As for street names, they can be either on plaques (many of which have been stolen): 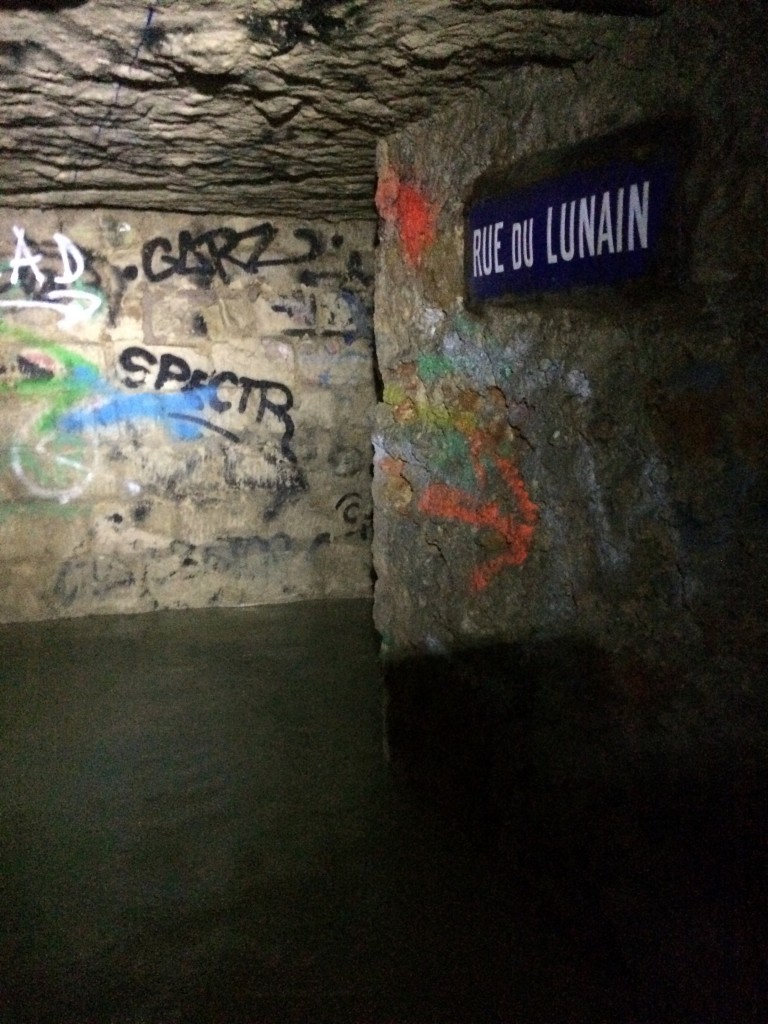 Or carved into the wall: 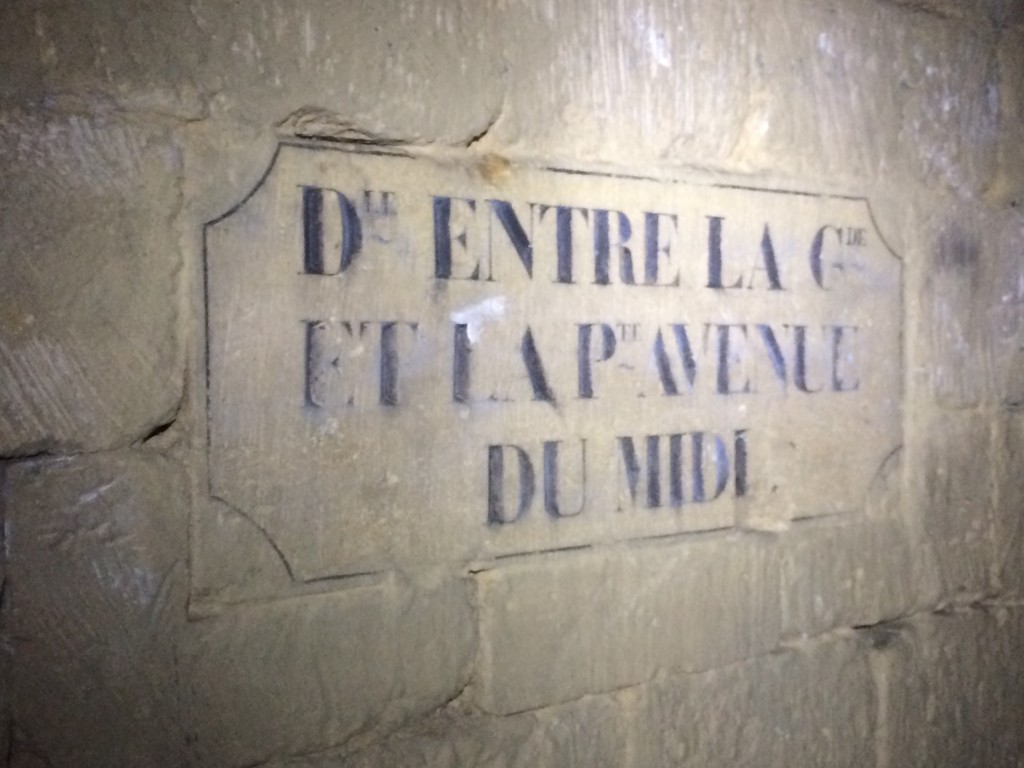 like “Diagonal between the Big and Little Avenue of Midi”.

So you noticed the water in the photo with the street-name plaque? Let’s use that to get back into the tour itself.

Very soon after crawling through the hole, we began walking through large puddles of water on the floor. Very cold water. It soaked through my hiking boots, and chilled me right through. Gilles reassured me that it was because we were still near the entrance, and the water wouldn’t be that cold throughout.

Which I soon discovered when we hit an area where the water was waist-high. Gilles showed the artist and me how to straddle the tunnel, putting our feet on a tiny ledge on either wall—the ledge sometimes being a bit above, and sometimes a bit below the water (so invisible). At one point, my right foot slipped, and I stepped down to the center of the floor, soaking myself up to my butt. (I’m 5’9″, BTW.) I quickly regained my footing, and that was the deepest I went for the rest of the tour. The water in the cave was crystal clear, except when it wasn’t. Which meant that someone had recently walked through and stirred up the mud. Meaning we weren’t down there alone. There was no odor besides humid rock except when we came across other cataphiles who were smoking (smoke smell), drinking (booze smell), burning candles (wax) or using some kind of lantern that had a chemical smell. This was rare, though, since we probably only saw 15 people in the 10 hours we were down there.

One note about smell, though. At one point I smelled a cigar, and even saw smoke hanging there in the air, as if it had no where else to go. I asked Gilles how long it would last before it diffused in the 90% humidity. “Three hours,” he told me. “Like a woman’s perfume.”

Which of course sparked a million storytelling synapses in my mind. An odor lasts three hours in the catacombs. Which means the culprit can’t hide her presence for that long if she leaves an olfactory trace. DULY NOTED!

It was also around the time that I was wading through thigh-high water that I asked Gilles about the fauna of the catacombs. There are no animals, he told me. Not even rats, because there is no food for them. The artist who was with us said she had heard about animals, like a fox, getting lost down there, but that was rare. And the whole time we were underground I saw only 2 spider webs (no food for spiders either?) and this: oh…and this guy taking a nap… But we won’t count him, because who the hell takes a nap in the catacombs?

One last thing for today: depth. 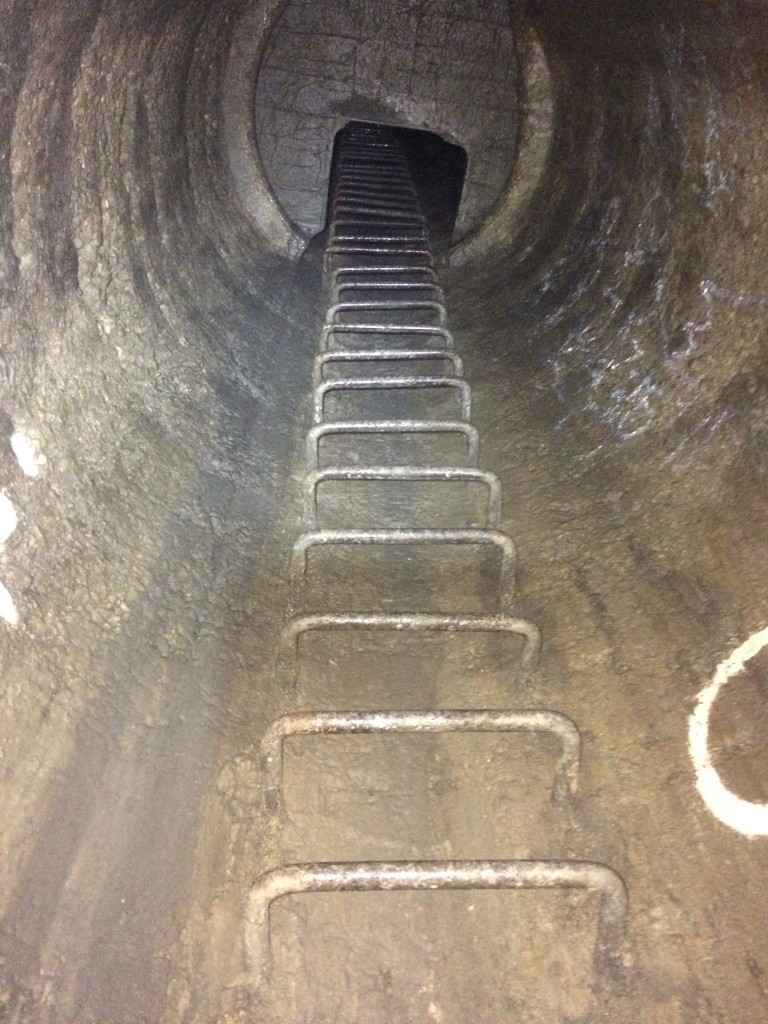 This is how deep we were. (The ladder goes way up above where it disappears at the top of the photo.) Gilles said we were 20 meters (66 feet) down in most places, and as high as 7 meters in others. And once we even climbed all of the way to the surface, up a staircase and behind a locked metal door, and peeked out of this keyhole 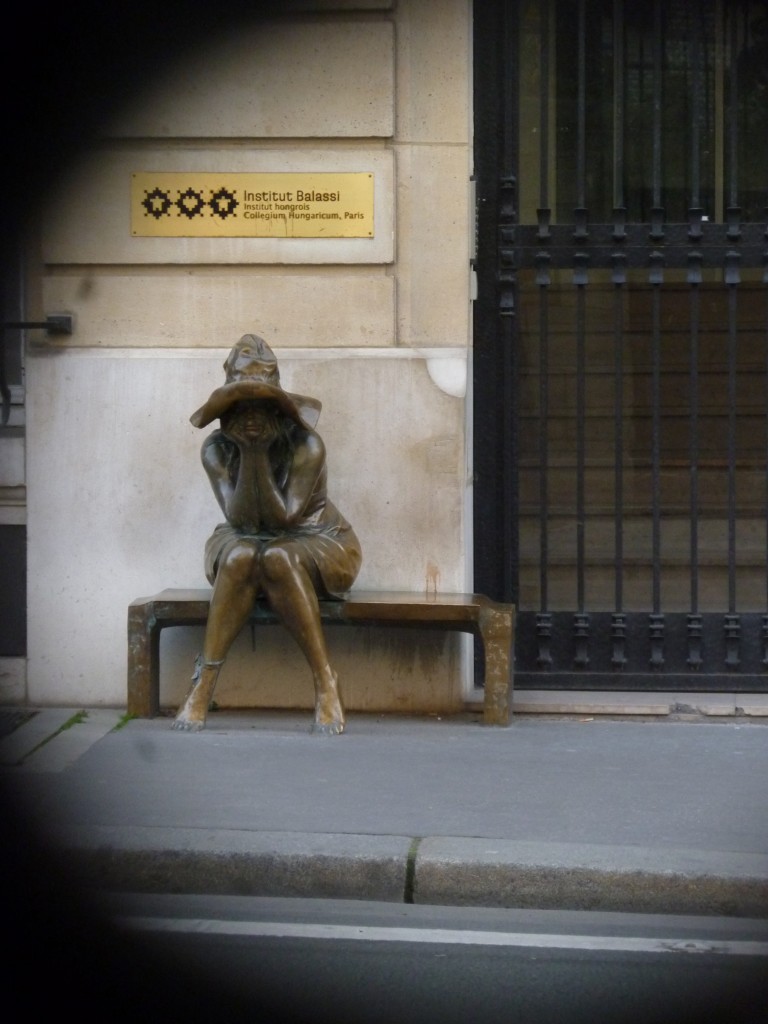 to see a sculpture across the street, and unsuspecting people walking by just a few feet away from three people wearing head-lamps and soaked and muddied to the skin.

Note on this particular locked door: Many years ago, two Nazi uniforms were found just behind it, where we were standing peeking out through the hole. Which means, unless they were ambling naked through the streets of Paris, two Nazis changed out of their uniforms, put on civilian clothes, walked out through the door into the above-ground world, and never made it back for their uniforms.

Alternate scenario…non-Nazis acquired Nazi uniforms, wore them underground, and then changed into their regular clothes before going out in the world. Since the uniforms are all we’ve got, the story is up to you. And trust me, there are a million stories lurking below the streets of Paris. More on that…