After spending a week with my kids in Paris, I jumped back on the plane to Edinburgh. This time I knew a few people, and had more hang-out time. And I’ve got to be really honest: I did absolutely NO touring of Edinburgh. Every second of the four days was spent either attending book events or hanging out with book people. Who needs tourism when you’ve got books?

Friday: 3pm Emylia Hall & Karl Ove Knausgaard did a talk on writing about family. Emylia read from her THE BOOK OF SUMMERS, and oh is her style beautiful! Listening to her read was like tasting honey: rich, sweet, and left me wanting more.

Then Karl started talking about his book and it blew me away. His A DEATH IN THE FAMILY caused a scandal in his native Norway, crossing the lines for many as he aired his family’s private life in a way they thought was shockingly invasive. When he read, Karl insisted on standing up and holding a mic, which facilitated this kind of leaning side-to-side dance that he does when he reads. And by the way, in real life he looks like the Marlbolo Man mixed with Alexander Skarsgaard. Just sayin’. 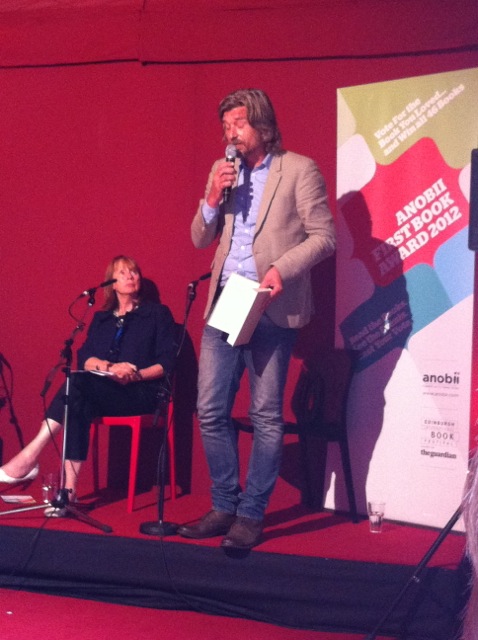 I bought his book and had him sign it for me afterward and told him that I too had a Norwegian father (or half-Norwegian) who was violent and scared the shit out of me. And then suddenly embarrassed that I had just blabbed this personal information to a complete stranger, I bustled off to the Authors’ Yurt. But the way he smiled a few minutes later when he sat down across the tent from me told me he had probably heard crazier stories from even stranger people.

At 5pm I went to a Young Adult event with Katie Dale and Jennifer E Smith where they talked about their books SOMEONE ELSE’S LIFE and THE STATISTICAL PROBABILITY OF LOVE AT FIRST SIGHT and the importance of serendipity and fate in their works and a lot of other interesting things. I bought both of their books afterward and made a date to go out with them and their publicists that night. 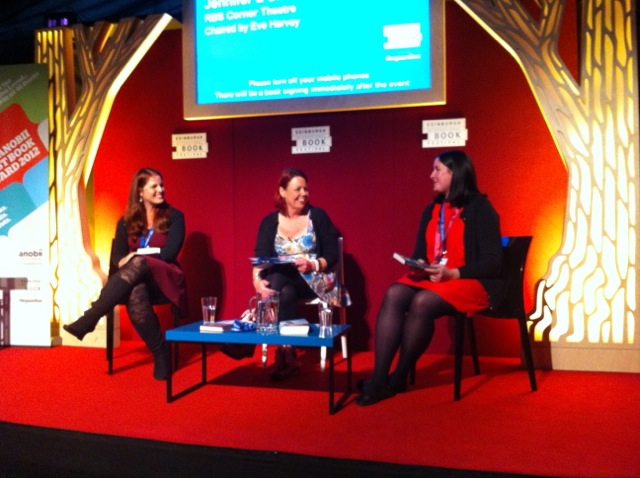 And then I dashed off to a talk called “What Comes Next?,” “next” in this case meaning after one dies. But if they had called the talk “Death,” I doubt anyone would have come, so well done for the marketing people on that one. Keith Gray (who I had already seen chair Patrick Ness), Kate Harrison (both YA authors) and Iona Heath (a famous doctor/general practitioner) chatted about death. 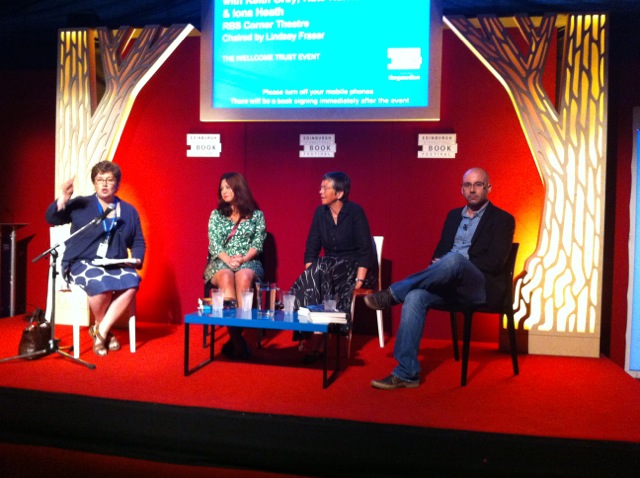 The doctor said that it was interesting that she had seen no difference in the anxiety and fear of death between very religious people and those who have no faith. Keith talked about the anthology he edited about death NEXT and his book THE OSTRICH BOYS, which one kid in the audience said was “the best book ever.” And then Kate talked about her book SOUL BEACH, which she pitched as “Facebook for the Dead.”

And after, I went out with everyone in the last two paragraphs (besides the doctor), a few publicists, some bookstore people, and a film director. We encamped in a cave-like wine bar and sat around chatting until the wee hours.

I spent most of the day at the “Presenting Life Writing Workshop,” which I joined in order to see what a writing workshop is like, since I have never been to one. There was a lot of talk about self-publishing, and how to publish your own memoir, so it was interesting to know how beginning memoir writers are now approaching publication of their own works.

After that I saw Jane Rogers talk about her book THE TESTAMENT OF JESSIE LAMB which won an Arthur C. Clarke award even though she hadn’t written it specifically as a science fiction book. 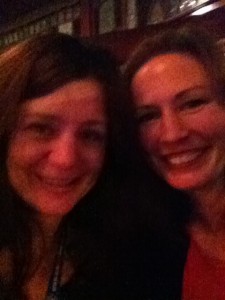 Kate Harrison & me in the wee hours

I was then scooped up by Kate Harrison, Nina Douglas (publicist for Orion) and Anthony McGowan (who, by the way, is very very funny and engaging) and swept off to Unbound where people were reading poetry that would probably have been good if we hadn’t been chatting so much that we didn’t hear any of it. KJ Wignall, who I would be on a panel with on Monday, joined us and we sat with a group of publicists who tried to convince us to go with them to karaoke at 1:30am.  Knowing I had a 10:30 event, I called it an evening and went back to my hotel. 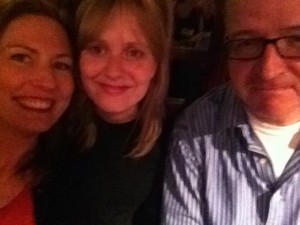 At 10:30 I attended my FAVORITE event of the festival (besides my beloved Neal, of course), which was Mark Walden talking about his H.I.V.E. books and introducing his new series EarthFall. Mark was, in one word, hilarious.  In two, hilarious and engaging. He paced back and forth on the stage and had the entire audience of rabid adolescent fans laughing and participating, and discussing which were their favorite villains in fiction and film and why. (Someone took my “Sauron” but no one mentioned my “Agent Smith.”) It was truly the most entertaining book talk I’ve ever attended, and I showed my appreciation by buying H.I.V.E. (Higher Institute of Villainous Education) and having him sign it for Max.

My next event was Marcus Sedgwick, who I immediately developed an author crush on…yes, he’s cute, but his way of speaking about writing and his stories lassoed me in and held me spellbound. And he has the best book title ever: MY SWORDHAND IS SINGING. However, I bought his new one, MIDWINTERBLOOD, since I was intrigued by his description of two souls living seven different lives together. 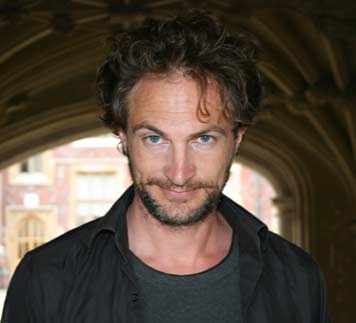 I met Angie Sage in the Authors’ Yurt as we were both huddling as close as possible to the fire (I was pitifully underdressed for Scottish weather), and flashed her my ticket to her event to show my support. I followed her into the theater, and listened to her talk for an hour about the world of apprentice magicians and dragons in her SEPTIMUS HEAP series to a crowd that included three kids dressed inexplicably as vampires. 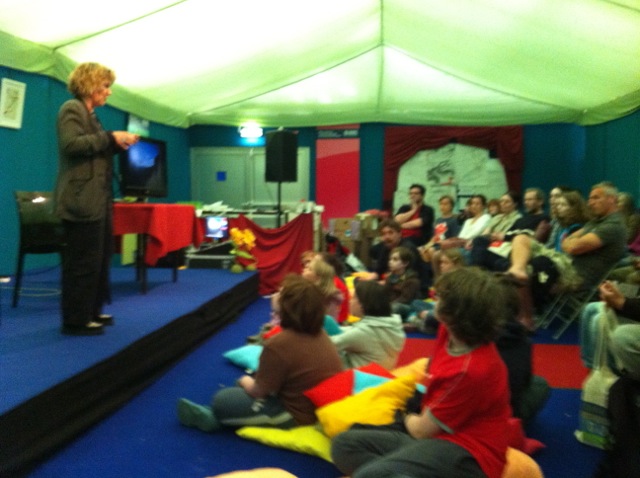 And after that I watched KJ Wignall and Will Hill talk about their books ALCHEMY and DEPARTMENT 19, the two having approached the topic of vampires in very different ways. The guys were funny and engaging, and afterward I was scooped up by them and their publicists and we headed to an Italian restaurant and then sat outside of Unbound and chatted until the very very wee wee hours.

KJ and I met in the Yurt bright and early, chugging coffee to make up for the lack of sleep. Since we had already chatted for hours over the last few days, we didn’t really need to prep for our talk. So we walked into the Scottish Power Theatre with our moderator Daniel Hahn and for the next hour winged it in front of about 150 Scottish school children all dressed up in their school uniforms. KJ had been joking before about how he hoped there would be more boys in the audience (to give you an idea of our difference in styles, his kissing scenes last all of 3 words, mine for a page), so I was very pleased to win the bet and see the place packed with girls.

I did my normal specialty and said some totally inappropriate things…well not actually inappropriate, but they just always come out wrong. Like how if you kissed a unicorn it would be pretty slobbery. (Don’t even ask.) But I think KJ and I did a pretty good job of entertaining the crowd, and we both sold completely out of our books afterward, so were quite pleased with ourselves and went out to lunch to celebrate. 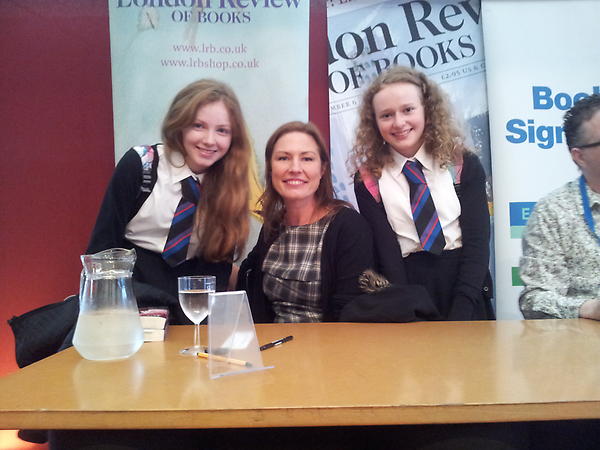 Me with Scottish schoolgirls Rachel and Ciara (pic @byrne_rachel)

I was so sleepy from the night before that I went back to my hotel for a nap, and then, refreshed, made my way back to the festival and gave a talk about the DIE FOR ME series to a group of about 25 parents and kids. I had an excellent chair, Philippa Cochrane, who make the hour-long discussion fun and inclusive of the audience, and altogether perfect.

Marcus showed up, returning the favor of attending each others’ talks, bought my books for his daughter afterward and we chatted about WWII occupied Paris (as one does).

After that, I was whisked off by my panel buddy KJ for a farewell drink. And that concluded my Edinburgh Festival experience.

A beautiful city, strange pig-stomach based food, a friendly and passionate public, lots of books, and new friends. The Edinburgh Book Festival was more than I ever expected it to be. I hope I get invited back!