At 5:15 we were all back in the lobby, and then herded out to the car by Bill, our media escort. This time I got to ride in front with him, and used my forty minutes wisely, discovering that he had been a media escort for 24 years. That his wife is an author. That he had escorted J.K. Rowling a couple of times, as well as Neil Gaiman, which got a squeal out of the group’s Neil fans who had overheard.

I kept getting sucked into the back-seat conversations, though, and felt kind of bad that Bill had to listen to us comparing book cover stories, what our characters were originally named, who came up with their own book titles, sex versus violence as a reason for YA censorship, and other fascinating-to-us but probably trite-to-him topics. I could tell he had a million amazing stories to tell, and can only hope that I get him to myself some day so that I can mine his cache of author secrets!

Once at Anderson’s Bookstore in Naperville, Bill led us through the Secret Author Entrance (e.g. the back door) and placed us in the capable hands of the bookstore staff. We were given a commemorative Anderson’s bookstore bag, and then told that while we were waiting, we could choose any book we wanted to take with us.

You should have seen our faces: the idiom of “feeling like a kid in a candy shop” should be officially changed to “feeling like an author in a bookstore (with a freebie book on offer)”. I began wandering and petting the books, and watching what everyone else was petting, and since I still don’t know YA that well, asked the others what I should get. It was either Aprilynne or Veronica who suggested MAZE RUNNER by James Dashner, which I promptly handed to the staff-member as my pick. 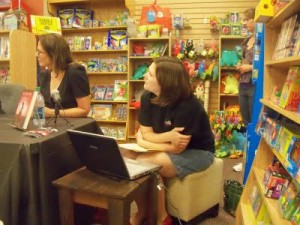 Me and "Pushy" (photo from Bewitched Bookworms)

Finally, we were called up to the front, where we sat again, panel-style, behind a table. The lovely ladies of Bewitched Bookworms were livestreaming the event and taking questions from the internet audience. (You can see their great photos and commentary here and the livestream video still exists here.)

We began with a quick introduction of our books, and then launched directly into a Q&A. Book blogger Me, Myshelf & I took notes, and you can see her transcript of the questions and answers here.

After all of the interviews I’ve done in the last few months, I felt sure that there was no question I hadn’t answered. So when, much to my chagrin, someone asked a new one—”What was the most surprising thing that happened to you after your book deal?”—my brain did a little glitchy “Whaaaa?”, and I passed the microphone to Tara. And then thanked every deity I could think of that I was not doing my first tour stop alone. 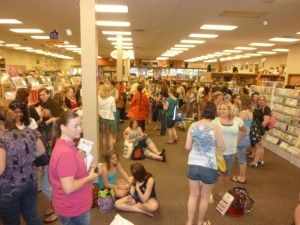 Post Q&A, the crowd lines up for the signing.

After the questions, the crowd lined up to get their books signed, and I got to meet several book bloggers and readers who had been in touch with me over the last few months. Putting a face with a name (or in some cases, just their online identity) was such a thrill. I wish I had made a list of who I met, because there were so many people in so little time.

My best friend Kim showed her support by bringing a whole huge cheering squad with her, including her husband and Tizzy, her sister Carol (who I love), Carol’s daughters Penny and Ellie (who you might remember was at one point my book’s youngest fan), and a handful of her friends who I had met over the years.

A university friend, photographer Mike Hudson, showed up with a picture he had taken of me reading a book a kazillion years ago (hint – I had big ’80s hair). And a reader from the audience gave me a drawing that she had done of my book cover. It felt like Christmas in June. 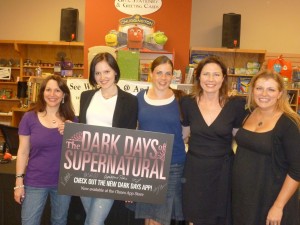 We took some post-signing photos, and then Bill herded us into the van and took us back to the hotel. Where, instead of returning to our rooms, as I had expected, we all headed to Tara’s room to celebrate her book birthday. We sprawled across her bed and chairs and chatted until we realized that we were about to miss last call for room service, and all dashed off to our rooms to order very late dinners and grab some sleep for DAY 3. (to come).